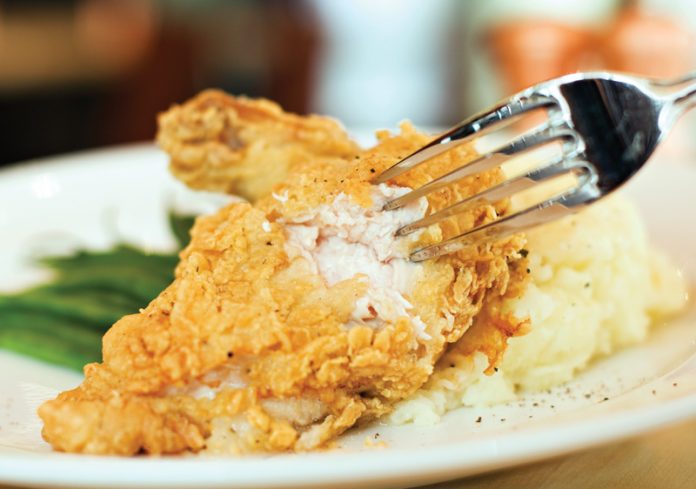 I’ve always liked the phrase go big or stay home. It instantly popped into my head when I heard about Chris Nestor’s plans to take over the space recently occupied by the elegant 55 Degrees, run by restaurateur Ali Mackani (of Lounge on 20) and his talented partner, chef Luc Dendievel. Known for his quirky, niche-y midtown lounge/restaurant Ink Eats and Drinks, Nestor is an intriguing person to be taking on this visible Capitol Mall location. Seemingly undaunted by a previous failure (Nestor and partner Randy Paragary’s Icon Restaurant and Lounge closed in 2006), he appears cheerily confident that affordable, upscale comfort food is just what downtown needs. He definitely is going big, and I admire his moxie in not only opening a restaurant in a sagging economy, but in a space where a well-regarded, high-profile restaurant closed its doors.
I was struck by the space’s transformation. What was once austere and formal (dare I say cold?) is now warm and inviting. Soothing earth tones dominate, and chocolate-brown leather banquettes are handsome but understated. The magnificent views of Capitol Mall are, thankfully, the same as before: a vibrant backdrop for the power lunches that are beginning to occur in this friendly new space.
Certain that comfort food is what down-on-their-cash consumers crave after a battering by the economic downturn, Nestor has fashioned a menu of cozy dishes at reasonable (for the real estate) prices. And while the items are playful and creative, they’re also recognizable. The shrimp BLT is enlivened with a citrus mayonnaise; the drunken chicken salad contains dates and pecans. The skirt steak is topped with crispy onions, and the “5 cheese” macaroni and cheese has an optional addition of applewood-smoked bacon.
Plate presentations are simple and appealing; there’s nothing highfalutin about Nestor’s food. The double-dipped fried chicken, with its marvelous crust, comes with a homely mound of plain mashed potatoes—no garlic, crème fraîche or truffle oil to fancy them up—and a hot sandwich crammed full of ham, turkey, bacon and cheddar cheese is the sort of substantial lunch you might make at home, if you only had the time. Speaking of home, when’s the last time you whipped up a batch of deviled eggs? Don’t bother. The restaurant offers them as an appealing appetizer, embellished with diced sweet pickle and capers.
Less tasty but darned attractive were the kitchen’s skirt steak tacos, speckled with chunky avocado salsa. Despite their color and visual appeal, the tacos were perplexingly bland, served alongside blander-still cilantro rice. I also was unimpressed with several of the breakfast dishes, which pushed the creative envelope more than the lunch items I tried. The bacon-and-egg fried rice was odd and unsatisfying, as was the pastrami bacon Benedict, swathed in a puzzling, sweetish Thousand Island hollandaise sauce that made me long for the traditional version. But other breakfast dishes I sampled were very appealing, like the wonderfully plain corned beef hash (there’s a spicy chicken hash for more adventurous diners) and the pulled pork quesadilla stuffed with scrambled eggs, mushrooms and cheese. The kitchen also offers breakfast oatmeal with seasonal fruit, as well as warm apple and cranberry quinoa cereal. I can just see harried professionals stopping for a quick bowl before hoofing it upstairs to their offices.
Arrive hungry: You’ll get fed enough food, at an affordable enough price, to leave feeling full and satisfied. When I visited, most entrées cost less than $12, and the robust sandwiches were in the $10–$11 range.
555 Capitol Mall is no longer a special-occasion restaurant. Instead, it’s an attractive, everyday place that seems to be interested in feeding its customers what they really want. In that spirit, Nestor solicits menu recommendations on his website. If he puts your dish on the menu, you get a free meal. While I was dismayed to see 55 Degrees close, I’m pleased for those who work, live and visit downtown that they once again can enjoy dazzling views while fueling up on comforting fare.

Breakfast of champions: Give the chocolate-chip buttermilk pancakes a try
Car talk: Unless you have some serious parking mojo, plan to stash your car in the garage