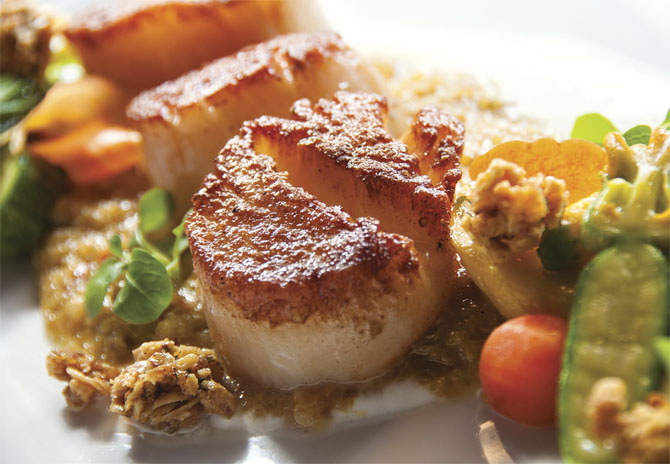 There’s something captivating about the raw, bold confidence of youth. I was struck by this in early 2011 when I met Pajo Bruich, who had recently taken over the kitchen at midtown’s LoungeON20. Eager to introduce Sacramentans to modern, game-changing cuisine, Bruich had just launched a menu showcasing the controversial art of molecular gastronomy. In a city where prominent chefs were focusing on farm-to-table cuisine, Bruich set about playing chemist, utilizing avant-garde processes and ingredients such as calcium salts and hydrocolloids to reimagine food in dazzling new ways. Bruich left LoungeON20 this past May, and the restaurant closed shortly thereafter. Wondering if his cutting-edge cuisine wasn’t the right fit for Sacramento, the self-taught chef made his way to San Francisco’s Michelin two-starred Benu as a stagier, and he reportedly had some compelling job offers in the Bay Area. But the Sacramento native was hungry to come home. The “home” he chose was Enotria in the Del Paso Heights neighborhood, which recently underwent an ambitious expansion and remodel. Soon after he started in the kitchen, I visited the restaurant—the first time to try his four-course Enotria Experience, the second to sit in the cozy wine bar and cobble together a dinner of small plates and nibbles.

In the dining room, you can order dishes à la carte (the menu’s four categories are First, Next, Main and Sweet) or go for the $80 prix-fixe Enotria Experience, which includes a wine pairing with each course—the best way to go if you want to sample an array of the chef’s creations. After trying a number of dishes that first night, I can say that Bruich is still pushing the envelope, though perhaps in a more tempered fashion. Molecular gastronomy continues to play a role in his kitchen, and I recognized a handful of items from LoungeON20. His lime-cured hamachi tuna makes a comeback, this time perched on jasmine rice mousse and embellished with cubes of compressed watermelon and Fresno chili “pearls,” made by adding gelatin to pickled Fresno chili juice, then dribbling the mixture into cold canola oil.

Standout dishes that evening included a succulent Niman Ranch lamb that had been rubbed with burned leeks, coffee grounds and dehydrated niçoise olives before cooking, and a knockout gnocchi prepared from housemade ricotta cheese and swathed in a dreamy truffle butter.

A First called, simply, Mushroom, was a play on ramen noodles. Bruich cut king trumpet mushrooms into noodlelike pieces and sautéed them, then paired them with teeny chanterelles glazed in an Asian-style marinade. The dish was topped with a poached quail egg. The ensemble was served cold, which was jarring to me, but I enjoyed the unique texture of the “noodles” and the dish’s subtle, well-balanced flavors.

Less successful in my book was a curious First called Squid. Bruich created crispy black squid “chips” sparsely adorned with housemade kimchi, bits of pork belly and salmon roe, dotted with crème fraîche and decorated with sprigs of micro cilantro and shiso leaves. I felt perplexed as I ate the chips, not understanding what Bruich was trying to accomplish. The intriguing dessert list is overseen by executive pastry chef Edward Martinez from Granite Bay’s lauded Hawks Restaurant. While his Roasted Tomato sounded interesting, it wasn’t something I wanted to try after dinner. I opted instead for the Caramel, a lovely square structure with three layers: a milk chocolate base, salted caramel in the middle and cashew cream on top. The texture is difficult to define; imagine a creamy flan married to sturdy Jell-O, with each layer melting at a different point in your mouth. The Oloroso Dulce sherry served alongside was an inspired pairing.

Martinez’s Dark Chocolate was another delight: bitter chocolate custard, chocolate curd and crispy chocolate cookie squares, artfully composed with a teeny scoop of imperial stout ice cream and scattered with crunchy chocolate crumbs. Partnered with a 10-year-old Malmsey Madeira, it was a stunning mélange that ended the visit on an inspired sweet note.

On another evening, settled happily in the wine bar with an excellent flight of Pinot Noirs, I relished the gorgeous cheese platter, perked up with surprisingly spicy pickled pineapple pieces and brightly flavored mango chutney. The charcuterie plate was equally impressive, featuring housemade items such as a dense chorizo pâté and an intense duck prosciutto. Bruich’s mushroom risotto—crowned with a thin Parmesan tuile—was marvelous.

I’m pleased that Bruich has brought his unique talent back to Sacramento and found a home at Enotria, whose stellar wine program will be an excellent complement to the young chef’s creative and undeniably modern cuisine. If you’ve had your fill of farm-focused menus, jump on board Bruich’s Enotria Experience.