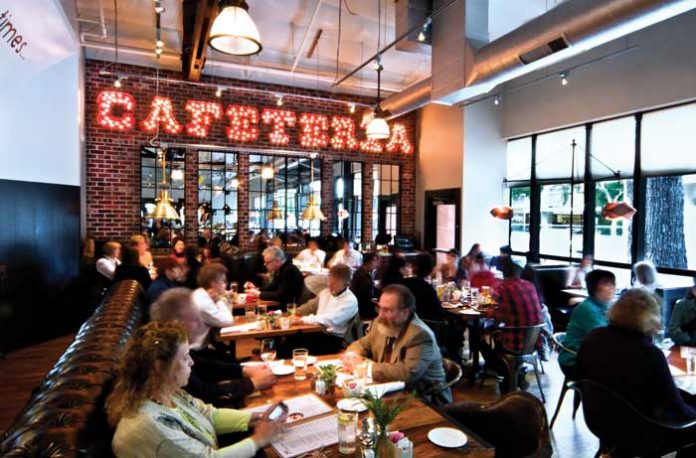 Taking a cue from Charles Darwin, H.G. Wells once observed that all must adapt or perish. So it goes in the restaurant world, where only those nimble enough to stay relevant survive.
Restaurateur brothers Mason, Alan and Curtis Wong pulled off a bold adaptation of their own earlier this year. Perhaps recognizing that diners once enchanted with lavishly priced menus were now worried about paying the bills, they closed their downtown restaurant Mason’s, performed a rapid renovation of the space and retooled the menu for a droopy economy. The result? Cafeteria 15L (pronounced “Cafeteria One-Five-L”), where the Wongs aim to serve modern, approachably priced comfort food in a more casual yet still stylish environment.
Always a tad uncomfortable in Mason’s (I aged out of its target market a while ago), I am delighted by the transformation. Not only is the staff buoyantly friendly, but 20-something fabulousness no longer seems to be a prerequisite for getting in the door.
The space is lively and bright, more charmingly utilitarian and less self-consciously cool than its former incarnation. A wall of push-up windowed garage doors has been installed parallel to busy 15th Street. (The Wongs plan for sidewalk seating on warm days.) Sleek, black upholstered booths line the dining room’s perimeter, while the room’s center is a funky jumble of rustic, rough-planked wood and metal tables, and two long communal tables add conviviality to the space. Oversized light fixtures, soothing dove-gray walls, exposed venting and a young waitstaff clad casually in jeans and white T-shirts all contribute a delicious urban vibe to Cafeteria 15L that doesn’t feel overdone or artificial. This doesn’t look like any cafeteria I’ve ever seen, and I like it.
A note about Mason’s curious peekaboo bathrooms, where the men’s and women’s sinks are separated by a glass wall, inviting the sexes to check each other out while lathering up: They remain unchanged, but their shock value never seems to wane. On a recent visit, I encountered a visibly startled 50-ish female customer, hands dripping, who had just spied a man grinning at her from the opposite side. If I hadn’t stepped out of the way, I think she would have knocked me down in her haste to exit the bathroom.
While the décor works nicely, the food is very much a work in progress. After four visits, it seemed clear to me that the kitchen hadn’t found its groove yet. There were some standout dishes, yet others were problematic or simply underwhelming. I’d return for the irresistible tater tots (crusty nuggets of soft mashed potato embellished with a bit of ground beef, served with a scrumptious red bell pepper sauce) and a thickly piled French dip sandwich. A bracing bowl of fat, al dente spaghetti with excellent meatballs was another winner, as was the fried chicken and waffle combo, served with gravy, pecan butter and maple syrup.
Less successful was the greasy mixed fry, whose layers of batter slid off, leav-ing the rock shrimp, fennel and green beans naked and defenseless at the bottom of the bowl. The ahi tuna poke was bland, though I admired its ruffly topping of microgreens and grated radish. A wedge salad had only a trickle of blue cheese dressing; a burger ordered medium rare came out practically raw; and a grilled salmon was much too salty, though its accompanying creamed Swiss chard was a delight.
However, new restaurants always have kinks to work out, and I liked Cafeteria 15L enough that I plan to be back soon to try dishes such as the smoked trout sandwich and the Hangtown Fry. I admire what the Wongs have done with their downtown space and applaud their enterprising adaptation to meet a changing dining landscape.

If you like to watch: Ask for a table in back for a view of the open kitchen
Cocktail time: Try Pear of Thieves, made with pear vodka, elderflower liqueur, lime and apple juices, and mint
Many menus: There are separate menus for happy hour and late night