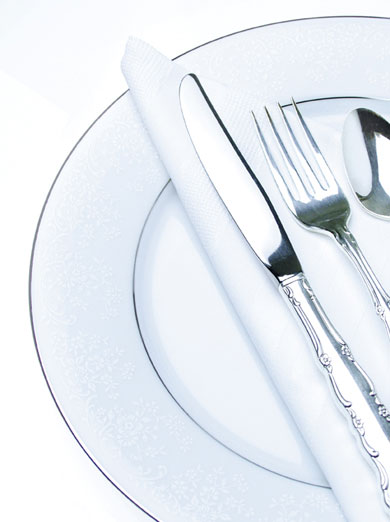 Glittering with culinary star power, Restaurant 55 Degrees arrived onto Capitol Mall in October like a sleek glass jewel box. What are we to make of this sparse, polished restaurant, with its square plates, filtered-tap-water carafes and unconventional (for Sacramento, at least) menu?

55 Degrees occupies the ground floor of Plaza Five Fifty Five, located next to the Bank of America building. The interior is airy and clean-lined, with a lustrous marble floor and elegant circular bar. The room is suffused with sunshine during the day and transformed into a surprisingly cozy and intimate space when wrapped in the soft black of the night sky.

Owners (and married couple) Ali Mackani and Lisa Watts, along with executive chef Luc Dendievel, are fresh from Folsom, where they owned and operated the well-regarded Baccaras Restaurant & Wine Bar. Belgian-born Dendievel joined the couple in 2003 from New York City, where he had earned kudos from many publications, including New York magazine, which handed him a Best of New York award for his culinary prowess as chef of Brasserie 360. Dendievel is fiercely ingredient-driven, as is his partner, chef de cuisine Christophe Grard, plucked from Napa’s Angle restaurant. The duo’s past experiences, which range from stints at Washington, D.C.’s acclaimed Citronelle restaurant (Dendievel) to an executive-chef position at Miami Beach’s 1220 Restaurant at The Tides (Grard), add up to some pretty impressive culinary qualifications. The crisply formal and somewhat austere 55 Degrees has certainly captured the interest of the downtown business crowd. On several occasions, we watched as the restaurant slowly but steadily filled up during the lunch hour, and by 12:30 p.m. the volume had been ratcheted to high as executives strained over tabletops to hear each other speak and waiters skittered across the floor to deliver food. And lunch isn’t the only busy time of day-try nabbing a reservation for 7 p.m. Saturday.

The name of the restaurant is an homage to a wine cellar’s optimal temperature, and the owners’ interest in the fruit of the vine is showcased in a freestanding 1,000-bottle wine cellar. The wine list is quite compact yet offers some wonderful surprises, like the “Old Ghost” old-vine Zinfandel from Lodi’s esteemed Klinker Brick winery and Paso Robles’ Garretson G White, a refreshing and exotic white Rhone blend made from Viognier and Roussanne grapes.

We found 55 Degrees’ uncluttered menu quite exciting. The chefs’ respective heritages are proudly evident throughout the menu: Dendievel’s in the mussels and the kitchen’s irresistible fries, Grard’s in delightful dishes like the cured duck foie gras au torchon (literally “to the cloth,” it refers to a traditional preparation in which the fresh foie gras is wrapped tightly in a piece of cloth and poached) and the simple and delicious steak frites.

Intrepid foodies will be thrilled to discover items such as an escargot and mushroom feuillet and the oxtail roulade salad, served with a gribiche sauce. And consider Dendievel’s plump ahi tuna burger on a freshly baked bun with wasabi mayonnaise. Served with pommes gaufrettes-delectable crosshatched potato chips-the burger is deeply satisfying, yet doesn’t leave you with that “ugh, I can’t believe I just ate all that” remorse you can feel after plowing hungrily through a cheeseburger.

The restaurant’s flagship mussels, a wildly popular item, are served several different ways: marinire style (prepared with onions, celery, white wine, garlic, thyme and parsley); Provencal (with shallots, tomato concass and fresh basil); Thai (a feisty version with green curry, coconut milk, ginger and lemon grass); and the “55 Degrees” (with Belgian white beer, applewood bacon, carrots, celery and goat cheese). All, of course, are served with those crispy fries, which are meant to be immersed in the mussel broth. The restaurant thoughtfully provides diners with a wonderful mussel cauldron that has its very own dunking section.

Salads range from the very simple and perfectly dressed baby mixed field greens to a ravishing roasted golden and red-ruby baby beet salad, sprinkled with tiny, crunchy “country bread” croutons.We savored the goat-cheese salad: a single piece of toast topped by a warm slice of crottin de chavignol, a cheese so esteemed in France that it’s protected by the strict Appellation ContrÃ´le laws. We found the cheese to have a drier, crumblier texture than the American goat cheese we have tasted, and we especially enjoyed its pairing with a feathery frise lettuce salad, bathed in a gentle walnut vinaigrette.

The kitchen’s chicken and mushroom croquette appetizer arrived with sprigs of fried parsley and a silken tomato sauce. The crunchy, breaded exterior of the croquettes yielded to a strangely gray but deliciously creamy interior studded with small chunks of chicken. We also tried the foie gras au torchon, served that day with a barely pink and delightfully tangy mound of rhubarb compote and toasted brioche. It was refrigerator-cold, which was unfortunate-we found it much more flavorful after it had reached room temperature.

An oven-roasted Alaskan halibut was served lukewarm on a fluffy bed of soft, precisely diced and equally lukewarm roasted bell peppers. A stiff, acidic and decidedly cold sauce resembling melted milk chocolate finished off the dish. Mackani explained that the sauce was a “vinaigrette” prepared from pured nicoise olives, vegetable stock, grapeseed oil and Dijon mustard-and that it was supposed to be cold. The point of the dish, he explained patiently, was to juxtapose the sizzling heat of the fish with the lukewarm bell peppers and the chilled sauce, but something was lost in translation for us.

We were crazy about the enormous Monterey scallops, pan-seared, napped with a perfumey vanilla-curry broth and served atop braised savoy cabbage and tiny-diced carrots. Other hits were the roasty-brown monkfish, served with sweet roasted cippolini onions and lardons in a red wine jus. The Australian lamb sirloin (again, served barely warm) was accompanied by tiny sauted summer squash and-the star of the dish-a piquillo pepper, stuffed with lamb shoulder that had been braised with eggplant, red peppers, shallots and garlic cloves.

*For the rest of this article, pick up a copy of Sacramento Magazine’s January issue.