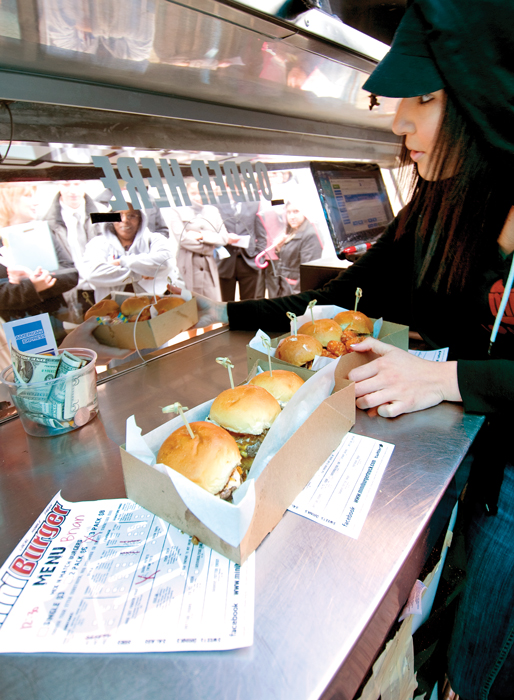 Can Sacramento join the ranks of food-truck capitals such as Portland and L.A.?
Until recently, that fantasy didn’t seem likely to become a reality, thanks to a city ordinance mandating food trucks to move every 30 minutes. Plus, land-based restaurateurs and their mobile counterparts don’t always see eye-to-eye when tackling the question of how to coexist peacefully and at mutual profit.
But a couple of recent developments have given food-truck lovers (and vendors) new reason to hope. This spring, SactoMoFo—Sacramento’s first mobile food festival—attracted some 10,000 supporters to Fremont Park to sample Korean tacos, vegan samosas and other fun fare. More recently, an alliance of local mobile food vendors began offering their wares on Thursday nights in a sort of mini-festival, lining up from 5 to 8 p.m. in locations outside city limits, where the ordinance doesn’t apply.
Davin Vculek of Mini Burger Truck, Sacramento’s first gourmet food truck and one of the key players in the local mobile food movement, is encouraged by the development. “It’s not going to be a SactoMoFo—it’s not going to be 15 trucks just yet—but we’re hoping to keep building on it,” he says. Operating outside city limits in places where there are “gaps” is a good solution, he says, not just because it sidesteps the ordinance, but because he never wanted to step on restaurant owners’ toes. “Some restaurant owners don’t think it’s fair for a food truck to park in front of their restaurants,” says Vculek. “But we actually don’t want to park in front of them—we respect their space.” Still, Vculek is hopeful that the ordinance will change. “There’s plenty of room for all of us to live together,” he says.
Prominent local restaurateur/chef Randall Selland, who says he’s not taking sides in the debate, recently hosted a sit-down between the two groups and city representatives in hopes of having what he called a “civil discussion” on what’s best for all concerned. While a resolution is still pending, Selland says discussions are moving in a “very positive direction. I think there will be a way to make it work.”
Sacramento City Councilman Steve Cohn also suggests change is possible. “It’s certainly worth re-examining our ordinance and looking to see what makes sense today versus when we adopted the ordinance several years ago,” he says. Cohn noted that the current 30-minute ordinance, as strict as it sounds, is actually more flexible than in years past, when there was an outright prohibition on mobile vendors who lacked a special permit.
But nothing will change on a dime, cautions Cohn. “It’s a sensitive issue,” he says. “We have to make sure there’s a level playing field between the brick-and-mortar restaurants and the mobile vendors. That won’t happen overnight.”
Whatever happens, Selland says, don’t expect it to be like Portland.“One thing that everybody seems to agree on is that what’s happening in Los Angeles and Portland isn’t going to happen here,” he says.
Cooperation is the key to making change happen, says Catherine Enfield, a food blogger and SactoMoFo co-organizer. “We are not the only city trying to change ordinances,” she says. “It is possible, since we have seen it done in Portland, Austin, San Francisco and elsewhere.”