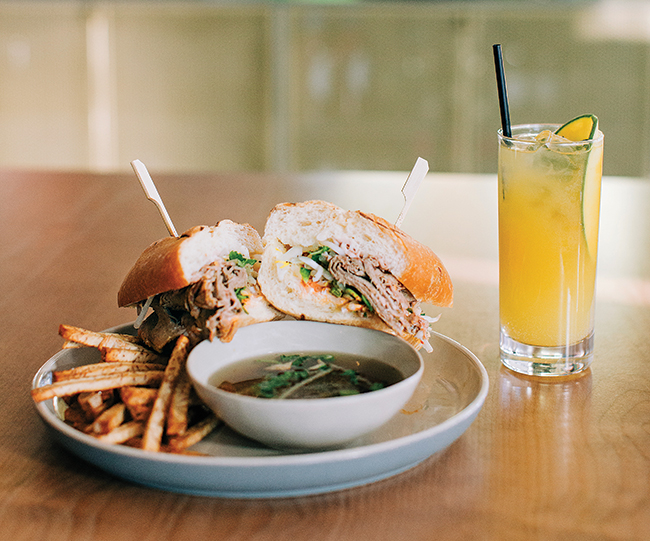 Here, people are used to trekking to South Sacramento when they have a hankering for authentic Vietnamese food. Mymy Nguyen and her husband, Jimmy Voong, envisioned something different: a hip restaurant in a hip part of town serving modern Vietnamese tapas and cocktails.

That’s how they came to open Saigon Alley Kitchen + Bar in midtown earlier this year. The couple, both first-gen Americans, have executed an admirably modern twist on the Vietnamese restaurant of their parents’ era. The Instagrammable interior is majorly minimalist, with simple, modern furnishings and a neutral color palette punctuated by two pastel murals, by Roseville artist Madelyne Joan Templeton, depicting romanticized images of rural Vietnam. The bar serves craft cocktails tinged with Asian flavors, along with alcoholic versions of Vietnamese coffee and bubble tea. And the menu is a mash-up of traditional Vietnamese noodle and rice dishes and millennial-friendly offerings such as banh mi tacos and vegan pho.

Saigon Alley took over the two-tiered space on L Street that once housed Saddle Rock and, before that, L Wine Lounge & Urban Kitchen. The ground floor is a first-come, first-serve lounge that gets slammed during happy hour (4–7 p.m. daily), when appetizers such as sugarcane shrimp, fried quail and salt-and-pepper squid are a budget-friendly $3 apiece. (There’s also reverse happy hour from 9 p.m. to close.) Expect to wait an hour (or more) for a table.

Things are a bit more sedate in the dining room upstairs, where you can sit and linger at a table. The pho has gotten the lion’s share of attention from diners for its broth, an umami bomb that takes 72 hours to prepare and that is poured tableside into a bowl of noodles and rib-eye. The pho costs $13—a shocking sum for people accustomed to South Sac prices, but hardly out of line for midtown. An entire section of the menu is devoted to vegan dishes, such as a plant-based banh mi, a vegetarian stir-fry and two items—pho and banh mi—made with Impossible Burger meat substitutes.

The cocktails have clever names like the Long Thailand and even cleverer preparations. For instance, the Pho No. 1 is made with gin milk-washed with sous-vided pho spices. Finished with hand-whipped coconut cream, it tastes like a cold bowl of pho. The nonalcoholic egg soda is really strong Vietnamese coffee topped with a raw egg white hand-frothed to a meringue-like consistency.

Saigon Alley is Nguyen and Voong’s third restaurant on the 1800 block of L Street. In 2012, they opened Wrap N’ Roll, one of the city’s first sushirito joints. Three years later, they turned it into a poke place called Make Fish. Now, with poke so ubiquitous that even Costco sells it, they’ve closed Make Fish to focus on Saigon Alley. With their talent for tapping into the dining zeitgeist, I wouldn’t be surprised to see Vietnamese tapas-and-cocktail bars everywhere in a few years.