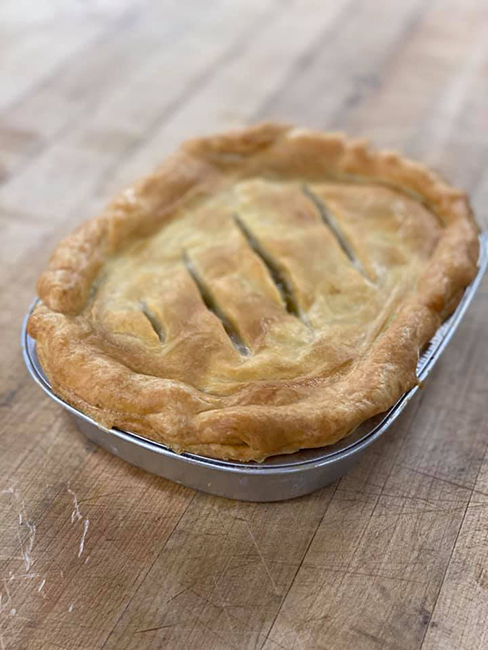 For Adam Pechal, 2020 has been the year of the pandemic pivot. The Sacramento chef, who once owned the highly regarded Tuli Bistro and Restaurant 13, was working for Hog Island Oyster Co. in Larkspur last March when COVID-19 hit, costing him his job. So he moved back to Sacramento and started doing pop-ups, which led to a full-time gig running a series of ghost kitchens out of Tiger restaurant on K Street. Gov. Gavin Newsom’s recent stay-at-home order forced the closure of Tiger, which left Pechal looking for another way to make a living.

Last weekend, he decided to try out a new takeout concept: selling take-and-bake chicken pot pies. Just one post on Facebook and the orders started rolling in. “People were calling all day,” he says. “We sold out.” That successful rollout convinced him he had a winner on his hands. “I’ve done plenty of one-and-done pop-ups, but I feel this thing really has legs. The interest is there.”

Pechal’s Pot Pies (his new business’ official name) feature Mary’s free-range chicken, vegetables and a traditional all-butter crust. Pechal replaces some of the water in the dough with vodka, a baker’s trick that results in a crispier, flakier crust. The rectangular pies weigh in at just over 2 pounds—enough to feed at least two—and cost $18. The next round of pies will be available this weekend.

Right now, Pechal is looking for a permanent commercial kitchen and is building a website for the business. Until the website is finished, customers can email him at pechalspotpies@gmail.com, tell him how many pies they want and Venmo him the money @adam-pechal. A limited number of pies will be available on a first-come, first-served basis. Right now, customers have to pick up their pies, but Pechal is working on delivery. After this weekend, he’s also looking to expand his menu, with a gluten-free Guinness-braised beef pie and a vegan mushroom pie. Other items could follow.

Pechal doesn’t seem fazed by this latest pandemic-produced pivot. “I have the fortune of living in chaos,” he explains. “I do my best work under pressure.”