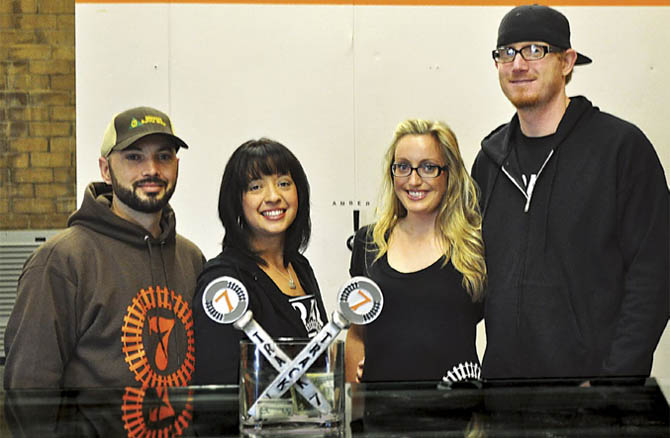 When Ryan and Jeanna Graham and their friends Geoff and Becca Scott launched Track 7 Brewing Co. this past New Year’s Eve in a Spartan warehouse near Sacramento City College, they had no inkling the craft brewery would be an immediate sensation. “We thought we would have a gentle rollout and slowly build our brand,” explains Ryan Graham. So naturally he and his partners were taken aback when 1,000 beer enthusiasts showed up on opening day. In fact, demand for Track 7’s artisanal beers—which include a downright delicious American amber, a potent American strong ale and a nicely balanced stout—was so great during the first few weeks of business that they were continually running out of product.

When production is in full swing, customers will have a choice of five to six beers on tap at any time, a mix of standbys and seasonal offerings. The owners recently started selling their brews to local bars and restaurants. Their main goal, however, is to simply meet the demand of the popular taproom. “We thought we would have support in this neighborhood, but we didn’t know it would be quite at this level,” says Graham. “It feels like a neighborhood institution already.” While quality beer is the obvious draw, something else is luring crowds back to the utilitarian taproom, which—with its roll-up door, casual couches and communal picnic tables—is part garage, part community living room.

“I think first and foremost they are coming for the beer, but it’s also because there is a nice, down-home feel to it,” says Graham. “We had a family here recently playing cards. People walk here with their dogs. They ride their bikes here. We get a lot of regulars from the neighborhood. It’s really inclusive and easy for people to relate to.”

On most Saturday nights, a food truck caters to hungry patrons. Graham says he and his partners have no ambitions of operating a restaurant—thus the outsourcing to vendors such as Wicked ’Wich and The Pizza Company. “We know a bit about beer making, but we really don’t know about food,” he says. “So we figured we’d let someone else handle the food side of things.”