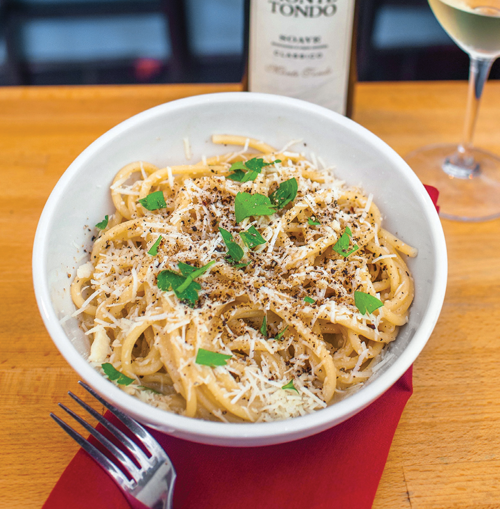 Pasta—uncomplicated but satisfying—is the main event at this new Pocket restaurant.

Cacio e pepe is one of the simplest dishes in the Italian culinary canon. Heat some olive oil in a pan with cracked black pepper. Throw in hot pasta, a smidge of pasta water and a big handful of grated pecorino cheese. Toss and serve. The cheese and starchy pasta water combine to make a silky sauce that is way more than the sum of its parts.

This dish was the inspiration for Cacio, a tiny new Italian restaurant in Sacramento’s Pocket neighborhood. Owners Jonathan Kerksieck and Katie Kinner-Kerksieck—restaurant veterans with a lot of experience in fine dining—wanted to open a casual pasta place that they could run by themselves. They found a 900-square-foot space with just enough room for 31 seats in Riverlake Village Shopping Center, around the corner from their home. It had been Ravenous Cafe and, before that, Plan B.

The Pocket is a bit of a restaurant desert. It has a number of Chinese restaurants, several pizzerias and lots of fast food but no sit-down Italian places. Apparently, it’s what the neighborhood was hungry for; Cacio has been doing 80 to 100 covers a day since it opened in late August. Giving up on the idea of running it solo, the couple hired a server to help Katie in the dining room and a chef to assist Jonathan in the kitchen.

The menu is lean: just five pastas, one meat entree, one seafood and a handful of salads and sides. Pastas are simple and accessible—things like spaghetti and meatballs, orecchiette with broccoli rabe and house-made sausage, rigatoni with pork ragu. And of course cacio e pepe, made with bucatini, a thick, spaghettilike noodle with a hollow center.

Prices are gentle; pastas cost $13 to $15. “I didn’t want to scare people,” says Kerksieck. “Simplicity is what we do really well,” his wife adds.

The couple met while working at Grange downtown in The Citizen Hotel. He was the chef de cuisine under Michael Tuohy; she managed the front of the house. Both had worked in restaurants since they were young. At 21, Kinner-Kerksieck was a hostess and bartender at Fox & Goose and later a server and supervisor at Spataro. Kerksieck has a CV as long as his arm, working everywhere from Original Pete’s in midtown to Cafeteria 15L, with stops along the way at Masque in El Dorado Hills, Bistro Don Giovanni in Napa and San Francisco’s Hotel Kabuki, not to mention most of the Paragary restaurants. Kerksieck met the couple’s financial partner, Brian Knadle, when they worked together at Piatti in the mid-’90s.

Cacio is a thoroughly modern mom-and-pop—just one of several that have opened recently in Sacramento. There’s also Real Pie Company, owned by pastry chef Kira O’Donnell Babich and her businessman husband, Fred Babich, and Allora, owned by Deneb Williams, a chef, and his somm wife, Elizabeth-Rose Mandalou. The three couples have one thing in common: a desire to chart their own course in Sacramento’s booming restaurant scene. “We wanted to get out of the big-box world,” says Kinner-Kerksieck. “The corporate world gave us a lot of tools, but it wears you down. We still get worn down, but now we’re doing it for ourselves.”

Cacio e pepe—Italian for cheese and pepper—has a lot of meaning for the couple. It was the first dish Kerksieck made for Katie when they were dating. “It was simple and amazing,” she recalls. “It defines what we’re doing here.”