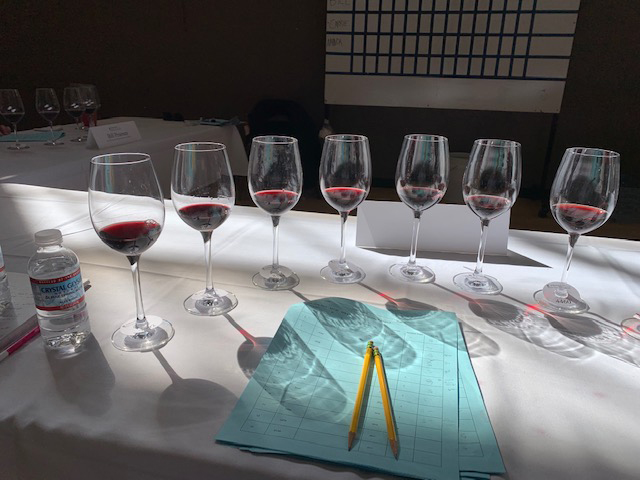 When I posted on social media that I had just finished tasting over 300 wines in a wine competition as a judge, you would have thought I had won the lottery. “Awesome!” and, “How fun!” and, “You have the best job ever” were just a handful of the enthusiastic comments made in response to my pictures showing flight after flight of wines. The truth, however, is that the life of a wine judge is not glamorous. It’s exhausting. It can be ugly. Sometimes it’s painful. Don’t believe me? Check out my story below.

On Tuesday March 2, nearly 50 wine judges from around the country gathered in Cloverdale (in Sonoma County), to participate in the San Francisco Chronicle’s Wine Competition. In its 38th year, this competition strives to “promote and award the latest vintages of wines produced and submitted by wineries from throughout North America.”

While I have been a wine judge for numerous competitions around Northern California over the years, I had always wanted to participate in this contest. Not only is the field of wines immense with more than 5,700 entries from all corners of the country submitted in 2021, the roster of judges is also quite expansive, featuring wine enthusiasts with diverse backgrounds and professional pedigrees. There were wine writers, wine critics, winemakers, vineyard owners and managers, wine brokers and buyers, and committed wine enthusiasts. 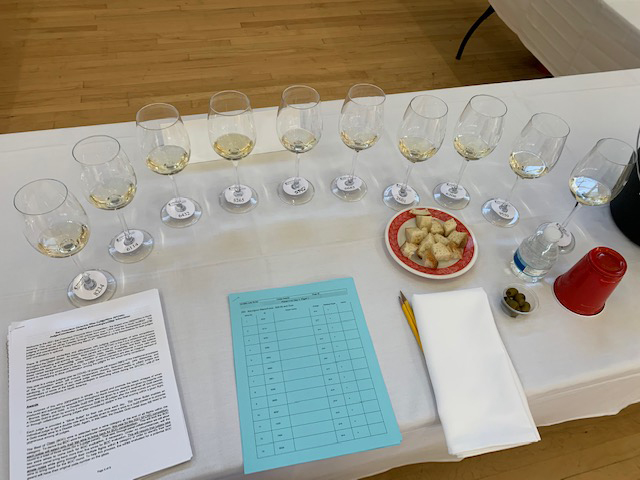 The competition kicked off that Tuesday morning at 8:30 a.m. Judges lined up 6 feet apart, as they waited to advance so they could wash their hands, sanitize, have their temperatures checked, make name tags and then be sent to their panel. Each panel consisted of three judges. My team for the competition included a winemaker/grower and a winery tasting room manager.

As the event started, volunteers wheeled out carts with anonymously labeled wine glasses in groups (flights) of 10 or so wines. The wines for each flight belonged to the same grape variety and price category. Judges were privy to those two pieces of information, plus the vintage and sugar content. Judges did not have access to the region of origin or any brand names. This methodology is meant to create a “blind” tasting scenario that prevents prejudices from coming into play. One $20 cabernet is evaluated against another $20 cabernet and doesn’t receive an unfair advantage or disadvantage due to preconceived notions about place or producer.

Tasting through the first flight of 10 wines, then the second set of 10 wines, my inner voice was remarking at how delicious all of the wines seemed to be. Of course, here is where all of the struggles began. My brain started asking, “What’s wrong with me? Am I too hungry or too tired to tell the difference between bad, mediocre and great wine?” Then I started to doubt my ability to judge. Of course, I’m already committed to the competition so what choice do I have but to continue? The self-doubt kept creeping in but I soldiered on and did my best. At the end of the fifth flight, and 47 sauvignon blancs, another judge spoke up and commented, “Gosh, that was a really great way to start the day. I thought all of the wines were solid, and some of them were terrific.” Well, phew! What a relief. I wasn’t going crazy or out of my element. The wines were truly delicious and I could let myself off the hook. 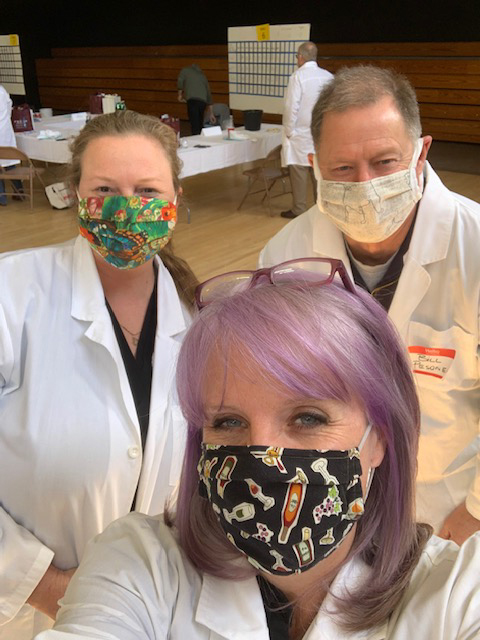 Next, came pain point number two. At the end of each flight, each judge on the panel has to declare their score for each wine . . . out loud . . . to a moderator who then writes the score up on the board. Once all scores have been posted, negotiations begin. If two judges awarded a wine a gold medal, and one judge gave it a bronze or no medal, a discussion ensues between the divergent parties to close the gap and decide on a final medal. Where is the pain I referenced, you ask? Well, for someone (me) who considers themselves to be a hardcore introvert and a master at avoiding confrontation, this part is a little uncomfortable. We are all required to take each other to task and try to gain understanding around the discrepancy. Maybe one judge considered a particular attribute a flaw, and the other thought that trait was the best part of the wine. Sometimes, we are asked to retaste the wine where we then might discover our original finding might have been off-base. Anyway, the fear of confrontation eventually faded (perhaps after the 32nd wine) and this part of the process became a time to learn, appreciate new perspectives, build confidence, compromise and sometimes eat humble pie.

The first day, our panel tasted 118 wines in total. We started off with 47 offerings of light and refreshing sauvignon blanc. I felt I was able to easily differentiate between the wines through the entire category. Then came red blends and cabernet sauvignon. After the seventh or eighth red wine, the battle against tannin became fierce. Tannin is a compound found in the skins, seeds and stems of grapes. You may have experienced tannin when drinking red wine as your lips start to curl up over your teeth and your tongue starts to feel incredibly dry. Once tannin takes hold, it can be a challenge to taste anything but astringency in a wine.

To combat the effect of tannin and palate fatigue while tasting a multitude of red wines, judges turn to small bites of fairly neutral foods to refresh their palates. Over the course of the competition, I believe it is estimated that judges, in total, consumed 15 pounds of rare roast beef, five cases of olives and dozens of loaves of bread. 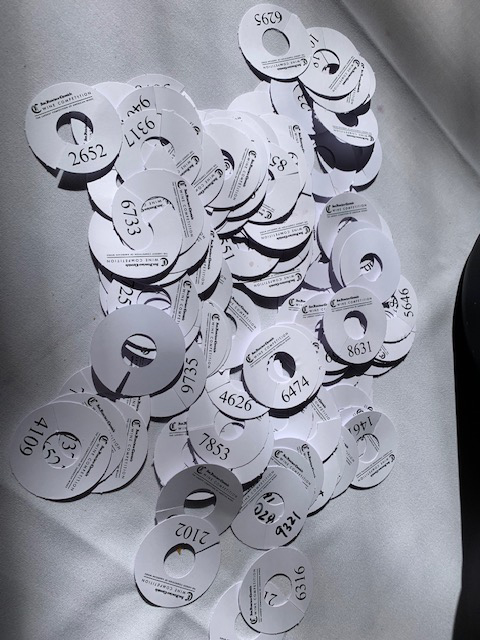 At the beginning of this article, I mentioned that wine judging can be ugly, and anything but glamorous. If you’ve never tasted in a competition you might not realize that judges spit out the wines they taste. It’s a skill you learn to master early in the wine business. You must consider the angle and force with which you spit. If you do not, you will undoubtedly experience wine dribbling down your chin at the most inopportune time from lack of force, or have it plunk into a spit bucket only to have it ricochet right back into your eye (both have happened to me!). One never intentionally swallows wine when you are tasting in a competition because you’d be on your knees in fairly short order. Although, you consistently spit, you are still absorbing some alcohol through your tongue, and small amounts will creep down the back of your throat despite your best efforts.

That groundwork laid, at the end of the first day and six hours of tasting, my teeth were stained an unattractive shade of zombie-purple and I was physically wobbly and mentally drained. I grabbed my things and walked across the street to my hotel. I opened the door to my room, threw my things on a chair and laid down for a nap. Two hours later, I awoke, still feeling exhausted and a little prickly. I grabbed dinner, some Advil, did some work on my laptop and went to bed early.

It was clear that wine had bested me on day one. I needed to bring in the sparkling water reinforcements if I was going to win this game. Throughout days two and three, I drank copious quantities of water between every three or four tastes of wine and made sure I was hydrated. Physically, I fared much better on these subsequent days. Mentally, however, I was still exhausted daily and the unappealing shade of gray continued to envelope my teeth and tongue. 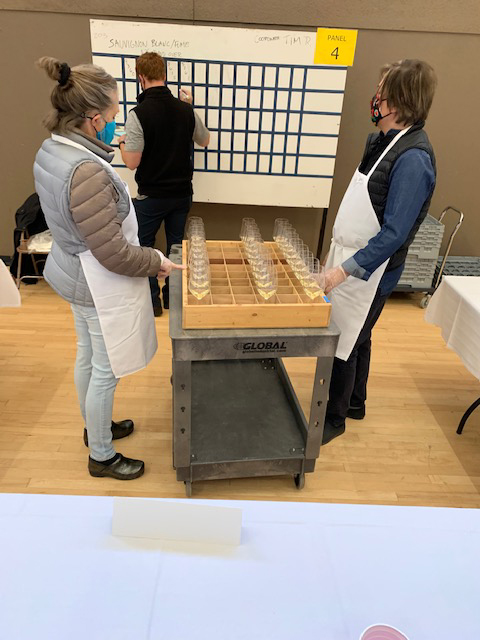 In spite of all of the challenges—self-doubt, dehydration, headaches, spitting in public, compromise and confrontation, and exhaustion—I wouldn’t trade it for anything! I love the opportunity to meet new people in my industry, share my experience and learn from others, and of course, taste and celebrate wines from every corner of the country! Please visit the SF Chronicle Wine Competition for more information about this competition and complete list of results.