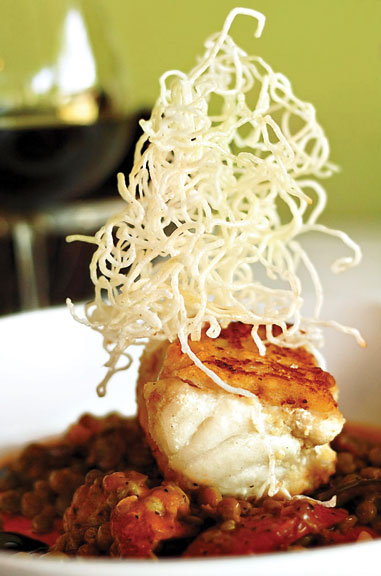 The restaurant’s elegant, old-fangled interior has been brightened and contemporized with a colorful array of horse-related artwork and newly painted walls—the main dining room is now a gentle lime green, the bar a striking scarlet. Above the handsome, dark-wood bar are four wide-screen TVs, which I found jarring in such a small space, but I suspect it makes Horseshoe an exciting watering hole for sports fans. However, the dining room’s snug intimacy, with its dramatic black and floral carpet and exposed wood beams, has been preserved. The best seats are at the windows, which look out onto Taylor Road, old-town Loomis’ main drag.

Examining the menus during my visits, I admired the variety. The lunch menu is dominated by salads and sandwiches, with a nice lineup of appetizers, while the dinner menu includes rabbit, halibut, Louisiana-style shrimp, pork chops and a luscious-sounding pappardelle pasta. The menus aren’t lengthy, but they’ve been carefully constructed to provide a lively selection. Some dishes—like the club sandwich and the Bistro burger, served on a kaiser roll with caramelized onions and blue cheese—are straightforward and traditional. Others, however, are daringly innovative, such as pan-seared diver scallops, napped with tarragon beurre blanc and served with apple-mint couscous; and venison osso buco with mandarin demi-glace, accompanied by fava bean-lentil ragout.

After several meals at Horseshoe, I had the distinct impression that the kitchen hadn’t quite found its groove yet, and I wondered if management was soliciting feedback from its customers—often the most valuable information a restaurant can glean. Many of the dishes were bafflingly oversized, often oversauced and, inexplicably, underseasoned.

Case in point: the Hot and Brown open-faced sandwich, which appears on both the lunch and dinner menus. Three slices of potato bread are fanned out on the plate, topped with thick slabs of roasted turkey, slices of pepper bacon and grilled tomatoes, then drenched with white cheddar sauce. The dish, easily big enough for two, was difficult to tackle and quickly became a mushy mess as the oddly flavorless sauce disintegrated the bread.

A “pressed” chicken came perched on an enormous hominy and chive potato cake that looked like a crusty, dark-brown pillow. Although I enjoyed the contrast of the crunchy exterior with the smoothness of the cake’s inside, it lacked any discernable flavor. Garnished with a large tuft of sodden, deep-fried carrot ribbons and green onion bits, this dish simply didn’t come together the way I think the chef had envisioned. A seared-ahi salad offered up a stunning, delicious piece of black sesame-encrusted fish, but it lay on a “chop chop” salad composed primarily of red bell pepper strips, lacquered in overwhelming garlic Thai dressing. And a beautifully grilled New York steak (a whopping $28.95) had clearly been peppered, but I couldn’t taste any salt. It was served with a large pile of mashed potatoes so buttery, I scurried to the gym after eating them.

There were, however, a number of bright points in our meals. The mushroom soup was a knockout: intensely flavored and wonderfully fragrant. The club sandwich, featuring smoked turkey, honey-glazed ham and applewood-smoked bacon, was lovely and flavorful, though it was so massive it had to be disassembled before it could be eaten. An arugula salad, dappled with pine nuts, bits of prosciutto and sweetly caramelized cipollini onions, was terrific and very fresh tasting. I also enjoyed the sautéed white Gulf shrimp appetizer, though the white-bean ragout beneath the shellfish was unquestionably bland.

Desserts, made in-house, also were perplexing. The double-chocolate brownie was so hard, we literally had to pound on our forks to break off a bite. An upside-down cake, served with a granular, cold caramel sauce, was so heavy, dense and dry that, after trying a bite or two, I simply gave up. The white-chocolate pistachio cheesecake, on the other hand, had a captivating, delicate flavor and pleasant texture.

Our servers were unfailingly pleasant and obviously well-schooled in the menu. Dishes were delivered in a timely fashion, and there seemed to be good communication between the front and back of the house.

The kitchen has some tinkering to do with its menu. But with time and a little patronage from local diners, this pretty restaurant may soon hit its stride.

BYOB: Horseshoe waives the corkage fee on the bottle you bring if you order a second bottle from the restaurant’s wine list
Saddle up: Christensen’s, one of the best tack stores in the region, is right across the street