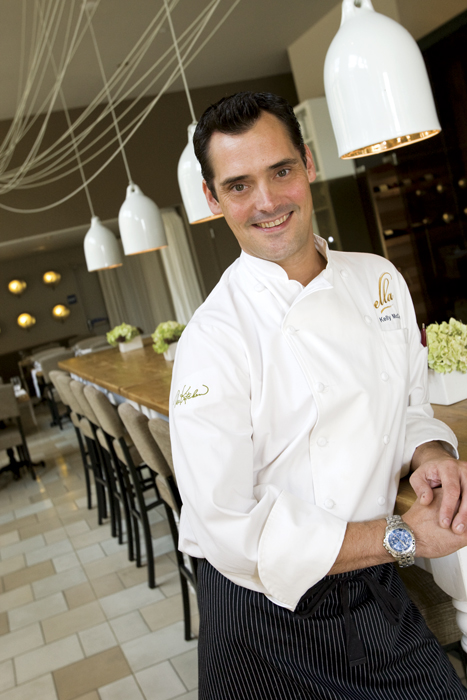 The sounds of AC/DC’s screaming guitars are flooding the room when I show up on a Tuesday morning at Ella, where I’ve arranged to meet with the restaurant’s new executive chef, Kelly McCown.
It isn’t the kind of music you’d ordinarily hear at Ella, where tasteful jazz is the norm. But it’s 10:30 a.m., before the doors have opened for business, and the crew is getting a little jolt of rock ’n’ roll while ramping up for the day.
It’s a fitting start to my interview with the 42-year-old McCown, whose fiery energy mirrors the music. With an impressive résumé including turns at Napa Valley’s Martini House and Rubicon Estate winery, McCown blew into town and took over Ella’s kitchen in July.
Just what can we expect from this guy? If you’ve been to Ella lately, you already know: He’s changing things up, big time.

Menu metamorphosis: McCown is changing “pretty much everything” on the menu, he says. “My first thought when I looked at the menu was to make it more seasonal, lighter and brighter. It seemed a little heavy to me. The summer menu had braised short ribs with sweet-potato purée, for example, which felt like fall to me.”

What’s on, what’s off: McCown pulls out a dinner menu. “See those items highlighted in yellow? Those are all new.” (I count 15.) Then he takes a black marker and marks an “x” by nine more. These are on the death list. Several longtime Ella staples—the wood-oven meatballs, the pappardelle with poached egg, the gnocchi—will stay, he predicts, but they may be in for some “retooling.” For instance, potato gnocchi with a cream-based sauce may become ricotta gnocchi with pesto.

Market-driven: It won’t necessarily be an entirely new menu every week. But things will be changing all the time, McCown says, “because as soon as something comes to market, it goes on the menu in some form.” He and Ella owner Randall Selland go to the farmers market twice a week, McCown says, and bring back “whatever looks good.” He’s also got a network of purveyors who regularly send him a list of what they’re selling.

Playing to his strengths: McCown is known for his fish and pastries. “At Martini House, I was sort of known for my fish repertoire, and also for integrating different ethnic ingredients in the food, especially Japanese and Southeast Asian.” Looking at his additions on the menu, I see what he means: His hamachi is served with yuzu vinaigrette and Tobiko caviar, his prawns accompanied by creamed wasabi cucumbers.

Why he loves October: “October is my favorite month to cook, especially here in Northern California,” McCown says. “We’ve got tomatoes along-side butternut squash, zucchini alongside a whole confluence of mushrooms—black trumpet mushrooms, fall chanterelles, yellow foot mushrooms, coastal porcinis—all these great things to play with. There’s something about October and bounty and harvest. It’s a great time to please people, a great time to cook for people, and the menu will definitely reflect that time.”