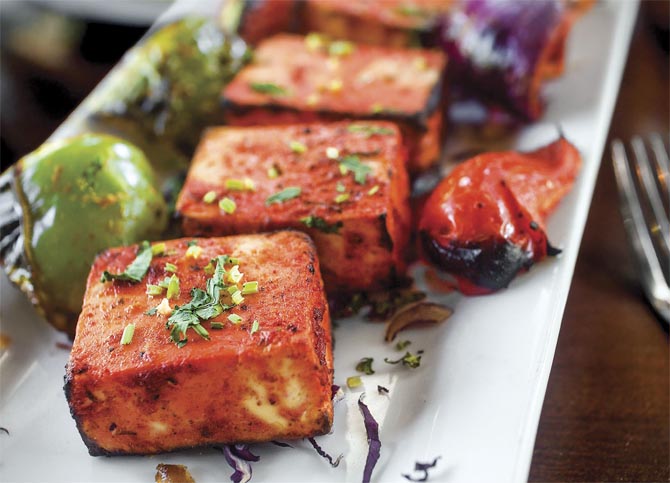 People who are really into food experience a frisson of excitement when they discover a diamond-in-the-rough ethnic restaurant. We especially like to gush about its odd location (“believe it or not, it’s in that obscure strip mall off of . . .”), its size (“it’s no bigger than my living room”), its modesty (“the place is incredibly plain”), and then launch into the glories of its cuisine (“I’ve never had kimchi like it”). We all have a ready list of these hidden gems in our heads that we can pull out and interject authoritatively (and gleefully) into conversations with other food lovers.

So it’s interesting to stumble across a place like Monsoon, located along 16th Street’s well-trafficked, hip restaurant row. This lovely, contemporary spot specializes in traditional Indian food with a modern touch, but it’s hardly a diamond in the rough. Occupying the space last housing Spin Burger Bar and, before that, Bistro 33, Monsoon is striking and tastefully decorated, with intriguing artwork, beautiful light fixtures, industrial steel beams, exposed ductwork and concrete floors. People amble by on the sidewalk and car traffic ebbs and flows, all easily visible to diners through the restaurant’s large windows. The scene outside can be mesmerizing at the end of a long day, as the restaurant’s lilting Indian music swirls in the background and patrons relax with a cocktail or glass of wine. “Wine,” you ask, “with Indian food?” Yes, indeedy. Monsoon has an admirable little wine list (in addition to a full bar). A fruity Chardonnay, it turns out, can be a great partner for chicken tikka masala.

I surveyed the sophisticated surroundings when I visited and couldn’t help but wonder if all the glamour and energy had gone into the front of the house. Was the restaurant paying as much attention to its cuisine as it did to its ambiance? Could I enjoy a coconut and chili prawn curry at Monsoon that matched the earnest efforts of a humble, out-of-the-way mom-and-pop restaurant?

After working my way through a number of Monsoon’s dishes, I can again say yes, indeedy, and acknowledge that honest, appealing Indian cuisine can come from an upscale restaurant kitchen. All the dishes I tried shone with distinctive flavor, and the kitchen did a great job with its spicy meter. One evening, a friend who doesn’t like heat asked for her selections to be mild (which they were), and my “medium spicy” dishes were just that.

The appetizer lineup includes crispy chicken wings swathed in a sweetand- sour tamarind chutney that I felt like licking off the plate when no one was looking. The restaurant serves several different versions of naan. I particularly relished the robust green chili and paneer cheese naan, which packed a hot, spicy punch. The menu also offers Indian roti—traditional unleavened whole-wheat flatbread— and paratha, a layered and fried whole-wheat flatbread. Vegetarians have lots of tasty options at Monsoon, including baingan bhartha, a delicious stewlike dish of roasted eggplant, and lightly battered and fried vegetable pakora.

Finding this restaurant won’t involve much culinary spelunking—it shares the block with high-profile Mikuni and P.F. Chang’s. While you won’t have to drive to an outlying neighborhood or wind perplexedly through a shabby strip mall to find Monsoon, you’ll still enjoy a vibrant and thoroughly satisfying dining experience.

The Drink of the Moment