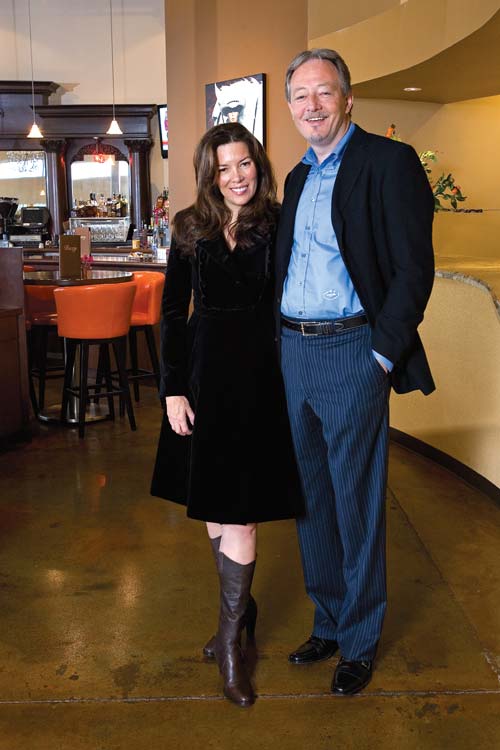 They love food—And each other

When chaos is normal and instability is stability, you must be in the restaurant business. If, after bookkeeping, hiring, firing, payroll, workers’ comp, training and customer contact, you are still in love with every ingredient and how it’s cooked, it’s safe to say you’re crazy for food.

Meet the Gillilands: Ron and Terri, married 12 years. Their marriage has endured through restaurants they’ve loved and restaurants they’ve owned. They own the midtown hot spot Lucca and recently opened Roxy Restaurant & Bar on Fair Oaks Boulevard just east of Pavilions. The two started seeing each other in the mid-’80s. “Our first date was at Chez Panisse,” says Terri. “We went to Stars all the time. That was my college education.”

How romantic—“Rather than pay attention to me,” Terri remembers of their dating days, “he’s reading the underside of the plates, costing out the menu, counting the profit on pasta.” “I’m a bad restaurant date,” admits Ron.

Two hemispheres—Separated by an ocean and a continent, Ron and Terri came from two little backwoods farms. He’s from Ireland, near Dublin, where he lived on a cattle ranch and studied animal science. Terri grew up on a farm in Colorado. “Neither of us has a background in fine dining,” Terri says. But both grew up close to great ingredients.

Subtle secrets on the menu—“Things that seem easy and simple on the menu aren’t what they look like,” says Terri. Most people don’t get that the chopped salad with its lemony dressing is really a cleansing salad. “We make our chefs cook one thing over and over, 200 items, plate it and taste it and do it again, and drive each other nuts.”

The ingredients chase—The Gillilands have made it almost sport to find ingredients and announce the purveyors on the menu. Some had to be begged. Ron and Terri take their chef to tour farms. “It’s taken a lot of convincing distributors that we want to buy their products,” says Terri. “We had to talk some of them into it.”

This proves it—In the I’m-crazier-for-food-than-you-are department, the Gillilands might come across as lunatic fringe. “We have literally spent every dime we’ve made to go out and eat,” says Ron. They once flew to Paris just to eat dinner. Even in Vegas, the two dropped enough money to satisfy the city’s bigs—without gambling. “We ate in 16 restaurants in two days,” says Ron.

This really proves it—Being in the restaurant business can fell many determined people, but Terri doesn’t see that happening to her or Ron. “We want to be doing this a long time,” she says.

No dilemma for this omnivore: He eats everything

When he’s not shooting pet photos or shoring up business at the Crocker Art Museum store, Morgan Ong is eating. He eats what he cooks at home. He eats out. And he eats everything.

Pupusas, for example. He’s been all over the region sampling the El Salvadoran cornmeal puffs with cheese inside. Over the years, he’s become obsessed with Indian stores, oysters, Vietnamese pho (even pronouncing it correctly: fuh) and stadium junk food.

An award-winning news photographer formerly with The Sacramento Bee, the 56-year-old Ong is never without the means to eat or to generously share his loot. His colleague and friend of 30 years, pet columnist and author Gina Spadafori, tours often with Ong. He packs food into a backpack like the circus packs clowns into a Volkswagen.

“He always has food in tow,” Spadafori says. “He gives salt for Christmas presents. He goes to the River Cats just for the food.” A recent obsession with Mexican grocery stores sent him to every carniceria in Natomas and up and down Stockton and Franklin boulevards.

His latest jag—That’s what Ong calls an obsessive phase. Two new jags are ethnic markets and barbecue. He’s in awe of Red Star International, a market near Florin Road with products from Trinidad, Southeast Asia and Africa. “It’s got the most disparate set of things I’ve ever seen in one place,” Ong says. A jag can consume him for weeks, months or years. “Even if I’m late for work, if I see something, I’ll make a U-turn.” The jag isn’t finished until he preaches about his discovery to his friends or treats them to a meal at his new haunt. He’s sampled barbecue across the Southeastern United States. There’s a place he’ll go in Sacramento: “Texas Barbecue on Otto Circle. For brisket.” He’s that specific.

For Ong, culinary variety was destiny. He was placed in Sacramento’s secret food places through photojournalism. “It fueled the hunt,” he says. “I could meet a wide segment of people in this polyglot community.”

Now at the Crocker, he’s still meeting people and gathering information to seek out the exotic. When out of town, he travels off the tourist map, dragging the reluctant Spadafori to neighborhoods she’d never venture to by herself.

The smallest detail—The extent people will go to make food right impresses Ong. “You just know they’re particular,” he says, naming Sacramento chefs Rick Mahan and Kurt Spataro for their perfectionism. “It’s like a musician hitting the right note. There’s just something right with the world when it all comes together.”
Don’t think of an oyster—Spadafori tells the story: “We were at Pike Place Market in Seattle, and Morgan got a lot of oysters, all kinds. By the time we got to the airport, we were running for the plane. I thought we were cutting it close, but Morgan said, ‘Nah, we’ve got plenty of time.’ Morgan is usually right about this. He ducked into a shop and came out with an oyster knife. He spread out newspapers and started opening them and eating them. He said, ‘Try this, they’re really good,’ and people started eating oysters with us! The oyster knife made it through security.”

OK, one thing won’t pass his lips—White rice. Right, the same he was fed at proper Cantonese meals when he was growing up in Sacramento. “It’s Wonder Bread.”

They eat, therefore they blog

Who needs food editors when you’ve got bloggers posting the equivalent of a newspaper food section every day?

Mainstream media, your oracle days are over. The food press has a new wave of first responders. Bloggers with culinary degrees, restaurant experience, cooking expertise, decent writing skills and—most importantly—no mainstream bosses are clicking us through a Sacramento food world not seen since . . . OK, not seen.

At the hard drive—Leading the indie foodies is sacatomato.com, a blog created and designed by Jennifer Cliff, 29, and Ann Martin Rolke, 40. First posted in August 2006, it gets up to 1,000 hits a week.

Who pays?—They do. There’s no other way to say what they want and research what they love. “I’m the kind of person who would rather buy clothes at Target to have more money left over to eat out,” says Cliff.

Why would anyone do this?—Their stated mission: “Selflessly eating our way through the capital area on your behalf.” If Rolke or Cliff finds something delicious, she runs to her PC and posts it. “We drive around,” Rolke says. “We eat anything, anywhere.” Says Cliff: “It’s food news the way we see it and the way we taste it.”

What do they know about food?—Lots. Cliff moved to Sacramento from Santa Barbara County, where she was manager/wine buyer for Suzanne’s Cuisine in Ojai. Her husband, Daren Cliff, works for Young’s Market Company, a wine distributor, and in his free time is the food-fanatic editor of Edible Sacramento.

Rolke is a graduate of The Culinary Institute of America at Greystone and springs from the Ketchum Culinary Center in San Francisco, where she wrote for one of the earliest culinary websites, recipe.com.

What’s on their blog?—Restaurant reviews, stores, recipes, local products, foodie gossip, food events, links to chefs and national blogs, a “Have You Tried?” column and a place for comments. The best part of the blog: Once a posting goes up, it’s archived on the site forever.

As their day goes, so goes the blog. They like the tortillas at La Fogata in Fair Oaks and the salty licorice at Corti Brothers. Sometimes the posts are written diarist style, inspired by a new produce shop, a big burrito or an excellent scone. Sometimes, they’ll post a great recipe. There’s a Rolke list of books for the bedside, including one on the history of sugar.

Sample post—Upon learning there was a 20-minute wait at Folsom’s Sutter Street Grill for the cinnamon-roll french toast that Cliff craved, she left and went a few doors down to Seasons. “It was decidedly more upscale than my beloved Sutter Street . . . on the other hand, the gal next to our table was reading a book titled Drink as Much as You Want and Live Longer, so things were looking up.”

Blogger spotting—Be on the lookout for anyone with a Canon PowerShot A60 digital camera at the table.
Computer knowledge required—Cliff and Rolke post to sacatomato.com separately from their home computers. Cliff cuts and pastes into the blog. Rolke writes directly into MoveableType.com, views a preview, hits Publish and goes live.

The competition—None. Unlike the rivalrous world of culinary publishing, bloggers believe in cooperation. Sacatomato.com sends visitors to 17 other local food blogs, including Appetizers, written by The Sacramento Bee’s Mike Dunne.