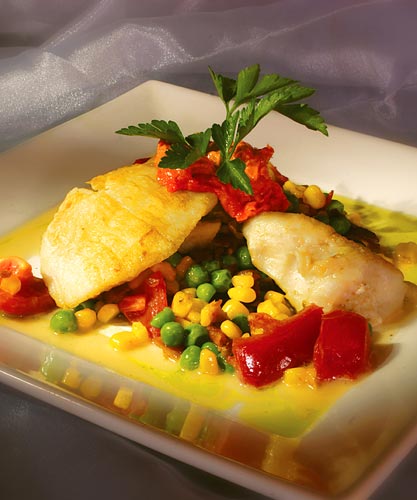 In Sacramento, a city brimming with new restaurants, there had been&emdash;until recently&emdash;a yawning hole with respect to seafood. No downtown restaurant had attempted to pair an upscale, sophisticated atmosphere with a laser focus on all things seafood.

So it came as no surprise that McCormick & Schmick’s, which opened in February in the gorgeously renovated Elks Club Building at 11th and J streets, was one of the most eagerly anticipated new restaurants ever in downtown Sacramento. The Portland, Ore.-based chain is all about seafood, and the new location has wasted no time in bringing a dizzying selection of it, from Kumamoto oysters and Mexican white sea bass to Canadian black mussels, to a Central Valley city ravenous for those briny, satisfying flavors.

The company prides itself on ultra-fresh seafood, even printing up a menu twice daily&emdash;one for lunch, another for dinner&emdash;to account for fish that arrives during the afternoon. Fish come from as far away as Ecuador and the Fiji Islands, but the local angle is not ignored; I was pleased to find Delta crayfish on the menu, as well as Sacramento-raised sturgeon, pan-seared with green apples, bacon and sweet potatoes. If the combination of apples, bacon and sweet potatoes makes your head reel, you’re not alone: I, too, avoided the sturgeon in my quest for clean, straightforward seafood flavors at McCormick & Schmick’s.

However, the people who come up with the menu don’t seem to share my enthusiasm for relatively unadorned fresh fish. Many of the dishes are prepared with strongly flavored sauces, bastes or spices that often mask the delicate, simple flavors of the seafood. For example, tilapia is encrusted with cashews and accompanied by a Jamaican hot rum butter sauce, and the Fijian ono comes with a spicy peanut sauce. In some cases, the fish is a supporting, rather than starring, player on the plate. While I admired the innovation of Atlantic salmon stuffed with Dungeness crab, bay shrimp and brie, it was the salmon I really wanted to taste.

Undaunted, I selected Parmesan-crusted petrale sole and was impressed by the fish’s crusty exterior and soft but not mushy flesh. Served with the simplest of accompaniments&emdash;gently sauted asparagus, prettily shaped steamed carrots and a mound of soft mashed potatoes&emdash;the meal was straightforward and earnest, placing the petrale sole at center stage where it rightfully belonged.

Another not-to-miss dish was the seafood fettuccine Alfredo, which was ravishing, speckled with tiny scallops and pink bay shrimp and enveloped in a creamy sauce brightened by a generous addition of lemon juice. A noteworthy effort: jumbo Massachusetts scallops, seared with lemon and pepper and served atop sharply satisfying sauted greens and a lumpy disc of shrimp hash. The enormous scallops tasted sweetly of the sea and were slickly fork-tender, but their flavor was sadly muddied by the hash, which imparted a murky, old-shellfish pungency to the dish.

But I would recommend the Dungeness crabmeat sauted with chunky, delectable mushrooms and artichoke hearts, and Jake’s Ã‰touffe, a dark, flavorful, intense rice dish crammed with Gulf shrimp, hunks of chicken and spicy andouille sausage. The salads were excellent; I especially enjoyed the butter-leaf lettuce salad, tossed with frisky Dijon mustard vinaigrette and stippled with bright-red peppercorns. The Caesar is another good option, judiciously dressed and dotted with crunchy housemade croutons.

The lengthy menu offers a wide selection of appetizers, from spicy steak satay and roasted portobello mushroom bruschetta to steamed manila clams. The pancetta-wrapped jumbo shrimp, arranged artistically on a balsamic glaze, were tasty and salty. However, they were served with jalapeÃ±o-studded pico de gallo&emdash;a perplexing partnership indeed. The dish certainly didn’t need the salsa and, after tasting the two components together, I decided this was a culinary marriage careening toward divorce. A better choice: the crunchy, huge housemade onion rings.

The desserts, presented exuberantly on a large tray, are big enough to feed you and several friends. The chocolate bag, filled with frothy cappuccino mousse and fresh berries, was a pleasant treat, and the cobbler, served in a large ramekin, revealed a souplike mixture of warm, sweet berries hiding under a flaky piecrust topping. There’s also an upside-down apple pie, a bewildering, crusty pastry showered with walnuts and caramel sauce, encasing a mound of gelatinous, salty-lemony apple slices.

The restaurant is beautiful, with lofty ceilings, brick walls and delicious, wood-lined booths with curtains for privacy. Arresting stained-glass light fixtures dangle from the ceiling like colorful inverted birthday cakes, and tiny lamps on the tables give the room an old-fashioned, supper-club glow. I was struck by how established the restaurant felt just a month or so after opening its doors. Solid and masculine, McCormick & Schmick’s manages to evoke a timeless, comforting ambiance. Each time I visited, the bar was jampacked, and dinner reservations are suggested, even on a Monday night.

While I might argue with McCormick & Schmick’s complex, sometimes puzzling ingredient combinations, I am very pleased that it is here. The next time I have a craving for British Columbian oysters or Arkansas catfish, I know just where to go.

What’s special:
The most comprehensive selection of fresh seafood in the region.
Not a seafood lover?
Order a grilled double-cut pork chop, New York steak or linguine with blackened chicken.
Counting your pennies:
The $1.95 bar menu, available weekdays 4â€“6 p.m., is a phenomenal deal.