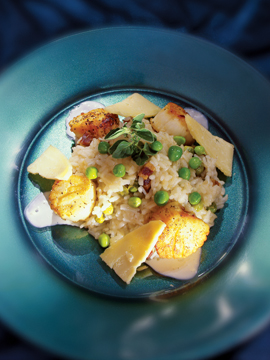 Natomas may be best-known as the home of Arco Arena. It also is the site of numerous recently constructed housing developments and a plethora of hotels that service the Sacramento airport. What it’s not known for is its cuisine: It traditionally has had a limited number of restaurants, most of them fast-food places.

But that’s all in the past. Thanks to savvy restaurateur John Cook, Natomas now has an independently owned, fine-dining restaurant to brag about. Co-owner of two Sacramento region Scott’s Seafood restaurants and three Mandango’s sports bars, Cook has single-handedly kick-started the food scene in Natomas with his chic, contemporary new restaurant, Malabar, which opened its doors July 8.

Located on Del Paso Boulevard in the Natomas Crossing retail center, Malabar is less than a mile from Arco and is flanked by new and about-to-be-built hotels and condominiums. When I visited, the view from the restaurant’s windows&emdash;of large, weed-choked lots and skeletal construction sites&emdash;felt somewhat desolate and isolated. But Cook sees nothing but potential in this location, banking optimistically on a vigorous stream of diners from Arco events, local hotels and future residential developments. As of early October, the Malabar team had already spent more than $4 million on the project.

The rich-brown, boxlike restaurant swells out of the ground like a gigantic See’s candy, and traffic from nearby Highway 5 hums persistently in the background. Malabar’s interior is arresting and bold, with an open kitchen jutting from the right-hand corner and a large, black stairway (leading to a banquet room) dominating the dark, busy space. The main colors are black and brown, with two rock-encrusted walls that soften what otherwise would be a rather severe space. At night, tiny, apricot-colored lamps glow through the dimness, looking like upside-down exotic flowers. The place is undeniably loud, especially when happy hour revs into high gear. Just try having a conversation on a busy Friday night, like our table did: We ended up shouting at each other over the din until we were hoarse.

However, loud interiors mean lots of drinkers and eaters, and it’s evident that Cook is on to a good thing. The restaurant was vibrantly busy each time I visited. Business types (including office parties celebrating birthdays and going-away lunches) fill up the dining room at noon, and the evenings are made raucous by a lively bar and a diverse crowd of diners.

It appears Malabar’s kitchen staff is striving to accommodate any food whim a diner may possess: There is a wide variety of dishes from which to choose, from soft tacos and thin-crusted pizzas to diver-scallop risotto, Asian stir-fries and barbecued beef ribs. There’s also a substantial list of sandwiches and salads and a number of cocktail-friendly appetizers, including spicy chicken wings and grilled prawn skewers with avocado-lime butter.

If you’re a fried-calamari lover, don’t miss Malabar’s version, which arrives sizzlingly hot and succulently tender, served with a gentle lemon aioli and a bold red cocktail sauce. I also was impressed with the enormous Cobb salad, a dish that often gets short shrift in restaurant kitchens. It’s piled with moist strips of grilled chicken breast, perfectly ripe avocado and tomato wedges, high-quality bacon, a pretty fan of hard-boiled egg and a generous handful of blue cheese crumbles&emdash;truly a salad the restaurant can be proud of. Another first-rate salad is the Caesar, showered with freshly grated Parmesan and tossed with a creamy, garlicky dressing.

Many of the entres also are quite pleasing. The grilled double-cut pork chop is sprinkled with a jewel-like compote of apples, onions and cranberries, the meat perched on a caloric hunk of very cheesy au gratin potatoes. Another winner is the roasted salmon, with its wonderfully crispy exterior, served with a mixed greens salad dotted with crunchy cinnamon-flavored roasted walnuts. I didn’t much care for the dish’s accompanying mashed potatoes, however; their gunky, waxy texture seemed far too heavy. If you like pasta, try Malabar’s Thai shrimp linguine, immersed in a lingering, spicy peanut-ginger sauce and brightened by julienned carrot strips, green onions and fat pan-seared shrimp.

The portobello pizza is excellent, covered with warm, tangy goat cheese, strips of portobello mushroom, tomatoes, and yellow and green squash. It made me eager to try some of the kitchen’s other pizzas, like the Philly cheese (prepared with marinated skirt steak, sauted bell peppers and onions) and the Mexican-inspired Sabroso pizza, whose toppings include black beans, menonita cheese and red chile sauce.

Dishes I’m likely to avoid on my next visit include an oddly crumbly, virtually tasteless housemade pork tamale, served with equally bland cilantro-lime rice and black beans; and the tempura ahi roll, a starchy, sticky sushi roll made with an excess of white rice and then deep-fried. On one visit, my steak sandwich, although tasty, had so little meat in it that I initially thought the cooks had forgotten to put it in.

The sweetest aspect of the meal, however, may simply be Malabar’s location. Natomas was long overdue for an upscale, dynamic restaurant, and all signs indicate that Malabar will fit the bill quite nicely indeed.

What Makes It Special: Natomas residents now have a swanky spot of their own for sipping cocktails and dining in style.
What Might Surprise You: Malabar considers itself very family friendly, offering a kids’ menu including items like pepperoni pizza and ziti with red sauce.
When To Go: Seeing Andr Rieu or the Trans-Siberian Orchestra at Arco Arena? Malabar is just a hop, skip and a jump away.

Party Time at The Sofia