To borrow a phrase from the Passover seder, why is Kodaiko ramen shop different from all other ramen shops?

Because one of its owners is Billy Ngo, the brilliant chef behind Kru.

Because another of its owners, chef Takumi Abe, worked at two of San Francisco’s most notable restaurants, Zuni Cafe and Incanto.

And because, as Ngo and Abe explain, it aims to give Sacramento its first taste of an elevated ramen experience.

“We wanted to bring our own interpretation of ramen,” says Abe, a San Francisco native who spent his childhood summers in Japan and ate a lot of ramen as a kid. (His father is from Japan.) Abe had long dreamed of opening a ramen shop, and in 2010 he went to Japan hoping to work for Ivan Orkin, the brash New Yorker reputed to make the best ramen on the planet. (Check him out on Netflix’s “Chef’s Table.”) When that plan fell through, Abe spent two and a half months in Japan eating ramen three times a day, gaining 35 pounds in the process. 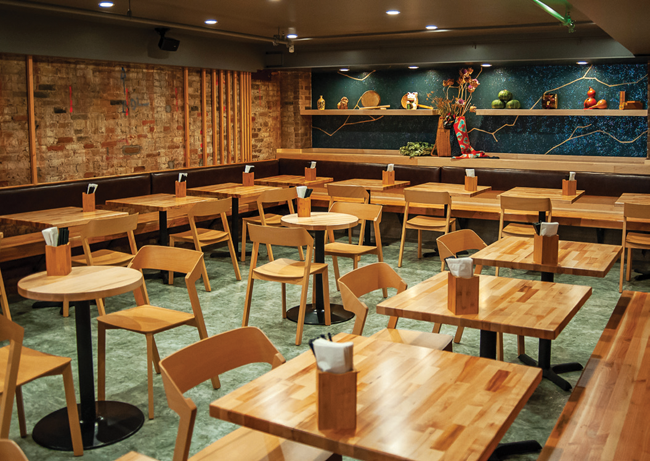 He consumed ramen in its many forms, from quick, $6 business-lunch versions featuring commercially made broth to high-end ramen made with top-quality ingredients and broth painstakingly simmered for 18 hours. “The great thing about ramen in Japan is that there are no rules,” Abe explains. “New styles of ramen are being invented all the time. It’s constantly evolving.”

Years earlier, Ngo had signed a lease on a below-ground property Youssefi was developing in the 700 block of K Street. It was 2010, long before Golden 1 Center was even a glint in Vivek Ranadivé’s eye. The project faltered until the arena was finally built, and Ngo and Abe decided to join forces and use the basement space for a ramen bar serving their artisanal, seasonal and local interpretation of ramen.

Kodaiko’s menu is tightly edited: a few small plates such as karaage (Japanese fried chicken) and ramen made with three types of broth: pork, mushroom and chicken. The broths are rich, intensely flavored and labor intensive. The roasted mushroom broth is made with cashew cream. The pork broth starts with blanched pork bones and ends with the addition of fish broth. The chicken broth is seasoned with smoked Wagyu fat.

Ngo and Abe use organic ingredients and make everything—with the exception of the noodles—in-house. Each bowl is assembled and seasoned to order. Diners can order additions such as ajitama (a seasoned soft-cooked egg), onsen tamago (a slow-poached, runny egg that adds richness to the broth) and coppa chashu (slow-cooked pork collar that’s not quite as fatty as pork belly).

Located near Golden 1 Center and open since August, Kodaiko is a surprising space: You enter a small, unassuming lobby and descend a long flight of stairs to a dark, moody, brick-walled room divided into a dining room and a bar serving craft beers and shochu cocktails. There’s also a six-seat ramen counter where diners can interact with the chefs.

Surveying the subterranean space, Ngo notes, “I love being down here.” By “down here,” he means downtown as well as underground. “It’s a great time to be in Sacramento,” he says.