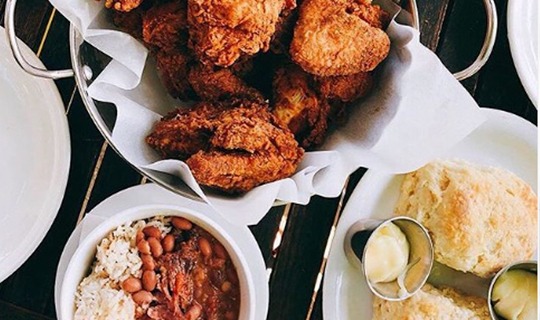 South restaurant owner N’Gina Guyton will spill the secrets (some of them, anyway) to making her famous fried chicken in a Zoom cooking class next month.

Guyton is teaming up with Mackenzie Cecchi of Casino Mine Ranch winery for the class, called “In the Kitchen With N’Gina Guyton of South,” on Saturday, March 13. The hourlong Zoom event starts at 6 p.m.

Participants will pick up a kit from South with a whole chicken, broken down and ready for frying. The kit also includes a bottle of wine from Casino Ranch Mine and premade fixings for a three-course meal to accompany the chicken: a Southern-style charcuterie platter to start, red beans and rice and cornbread, and kitchen-sink cookies for dessert. The package feeds two.

During the class, Guyton will demonstrate her techniques for making Southern-fried chicken. But she won’t be giving away all her secrets: The chicken will come pre-brined, and the kit will include her secret spice mix. “Unless you’re a supertaster, there’s no way you’re going to be able to reverse-engineer my recipe,” she says.

The South proprietor understands that frying chicken intimidates many a home cook. She wants to get rid of that stigma. She’ll also show how to fry chicken without destroying your kitchen in the process. “I’m a Virgo, Type A, OCD personality, so I clean while I cook,” she notes. “Your kitchen will get a little messy from the splatter, but I’ll show you cleaning tips so your kitchen won’t be a disaster.”

Unlike Zoom cooking classes that require participants to make an entire meal from scratch, Guyton promises this one will be doable. “Drinking and frying—that’s all we’re doing,” she says.

For tickets, go to https://www.casinomineranch.com/events/friedchiken/