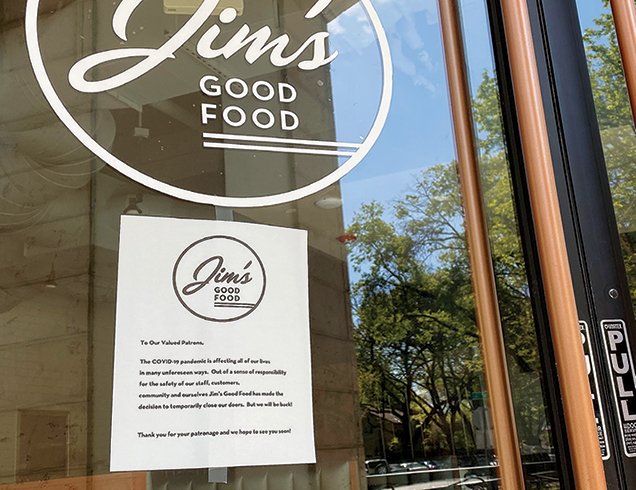 On March 14, I had what I suspect will be my last meal in a restaurant for a long, long time.

That night, my husband and I ate at Jim’s Good Food, a newly opened restaurant serving hip diner fare at the corner of 16th and O streets. I was planning to write a story about Jim’s and had recently interviewed its owners, well-known Sacramento chef Michael Thiemann and his wife, Lisa. During the interview, they were in high spirits, optimistic about the future and brimming with creative ideas for their new venture. A few months earlier, they’d closed the popular downtown vegetarian restaurant, Mother, and left their positions at Empress Tavern. They told me that they opened Jim’s, with Lisa’s father as their financial partner, in the hopes of building a business they could own and control as a family.

The week of our interview, the coronavirus sweeping Italy was already causing consternation in the United States. On March 11, the World Health Organization officially declared COVID-19, the illness caused by the virus, a pandemic. And by the middle of March, some people were starting to question whether it was wise to dine out. My husband is a Bee reporter who’d been writing about the pandemic for weeks. When he tweeted about our plans to dine out, a reader told him it was irresponsible and foolish. Still, I felt I needed to eat at the restaurant in order to write about it, and I also wanted to support the Thiemanns. It seemed like a good civic deed, a gesture of solidarity.

That night, we arrived at Jim’s to find the restaurant less than half full. We kibitzed with our server as we ordered wine and food: shrimp scampi on grilled toast for my husband, roasted chicken with fennel and white wine jus for me. The food was lovely—just what I’d expect from Mike Thiemann—and we were relaxed and happy. We normally don’t eat dessert, but on a lark, we ordered the special, a slice of strawberry “birthday cake” covered with cream cheese frosting and cheerful pastel sugar sparkles. When the cake appeared at our table without the promised birthday candle, we playfully made our server return to the kitchen and bring us one. The cake was a delicious surprise for chocoholics like my husband and me, and though we were full from dinner, we ate every bite. But as we polished off the cake in the half-empty restaurant, a sense of foreboding fell over us. Fearing our waiter might soon be out of a job, we left a hefty tip. As we drove home on midtown’s quiet streets, we reluctantly acknowledged that we probably wouldn’t go out to eat again for a while. 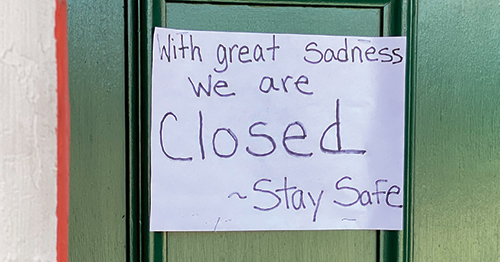 After that evening at Jim’s, life as we knew it changed quickly. On March 16, Gov. Newsom ordered restaurants to suspend dine-in service. In an attempt to save their businesses and keep their workers employed, many pivoted to offer curbside takeout and delivery. Midtown’s Aioli Bodega Espanola switched from a Spanish restaurant to a corner market selling produce, deli sandwiches and toilet paper. With the governor’s blessing, some bars began offering cocktails to go. Jim’s Good Food closed “until further notice” and started a GoFundMe page to help compensate workers for lost wages.

I’ve now had a couple of weeks to get my head around what is happening. Yesterday, the Selland’s group ceased takeout operations at all its restaurants, citing concerns about its employees’ health and uncertainty about what lies ahead. Several restaurant insiders have told me they believe many restaurants won’t be able to come back after the pandemic ends. 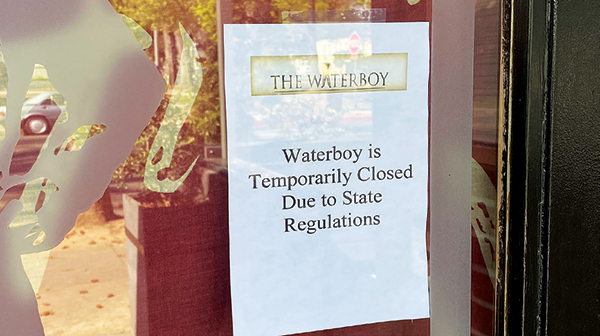 My daughter recently sent me an article from Harvard Business Review about the grief we’re all experiencing right now. It’s called “anticipatory grief,” and it’s what you feel when the future is frightening and uncertain. I am definitely experiencing anticipatory grief for my friends in the restaurant business. I worry for the chefs, servers, bartenders, bussers and other food personnel. Over the many years I’ve been covering Sacramento’s food scene, I have come to know, respect and even love many of them. 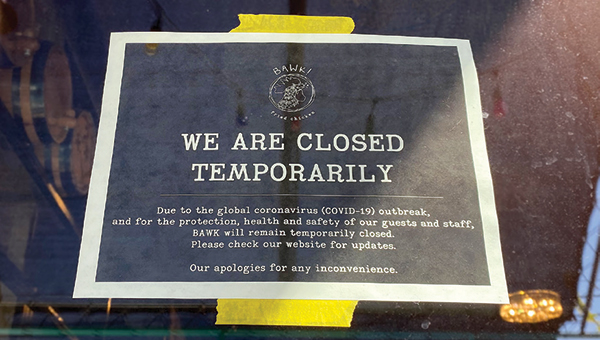 I’m feeling anticipatory grief for myself as well. I realize there are more important things in life than eating at a restaurant. But over the coming weeks, maybe months, I’ll greatly miss the social aspect of dining out. And I’m terribly sad to think about how our restaurant scene will be changed at the end of this crisis.

In the meantime, I will do all I can to help, and I encourage you to do the same. Buy a gift certificate from a local restaurant and put money directly in the pocket of a small business owner. Order takeout whenever you can. And don’t forget to tip well.

We’re all in this together. If we support our restaurant industry, it will be there for us when the pandemic ends and life returns to normal. Until then, eat well and stay healthy. See you on the other side. 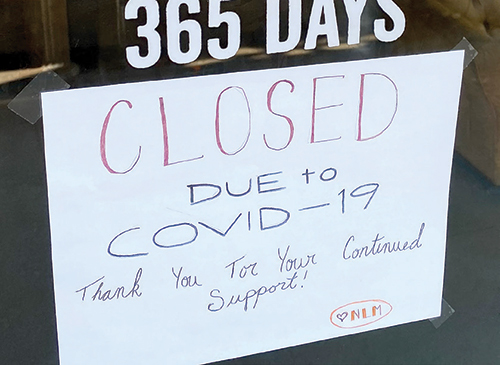