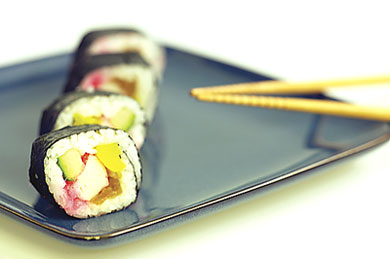 There’s a new Japanese restaurant in town, and it’s quietly poised to challenge all your comfortable notions about this tiny country’s cuisine. If your experience of Japanese food is limited to oversized sushi rolls, bento boxes and hot sake, a meal at Kozen could very well be your Japanese-food epiphany.

This striking restaurant occupies a space on Fair Oaks Boulevard that has housed a string of restaurant failures. “Oh, boy, not another one,” a friend remarked in midsummer as we drove past the shingled exterior of the building many Sacramentans still refer to as the Fish Emporium. But the fledgling restaurant we spied was Kozen, and the sharp, talented team responsible for its creation has injected vibrant new life into this space.

It’s a struggle to characterize Kozen’s cuisine. The most obvious description would be “contemporary Japanese,” but the kitchen staff shies from the phrase. The menu was built upon “culinary founder” Shotaro Kamio’s adherence to what he calls “the three S’s”: seasonal, simplicity and surprise. Beyond that, the restaurant uses traditional Japanese ingredients and recasts them into forms that Sacramentans can comprehend and appreciate.

Whatever you call it, expect it to be electrifying. One of our favorite menu items is a dish called kamo negi. Muscovy duck breasts are marinated in sake-soy mirin (Japanese rice wine) and sauted, then combined with chunks of sweet, smoky grilled eggplant and cradled in small, custardy pancakes made with yama-imo, a large Japanese mountain yam whose grated raw flesh is like a slimy, gooey, sticky puddle. The silky pancakes are doused with a thick sauce made from another traditional Japanese vegetable: negi, a full-flavored green scallion. Finally, the dish is drizzled with a veal and Port wine reduction and garnished with a deep-fried lotus root slice. Another notable dish is edamame san. A long, narrow white plate is presented with three piles of edamame (soybeans): The first is steamed and sprinkled with flaky Okinawan sea salt, the second sauted with garlic, shallots and soy, and the third-the lone chilled selection-is tossed with lime juice and a Japanese seven-pepper blend called shichimi. With its contrasting temperatures, flavors and textures, the dish is an exciting manifestation of the kitchen’s desire to surprise-to remind diners that Japanese ingredients are versatile, not ploddingly predictable.

Our children devoured the ten kara, light-as-air tempura-fried Monterey baby calamari served with a vivacious dipping sauce called yuzu kosho. Yuzu is a sour Japanese citrus fruit; kosho is a green pepper-so, as you might imagine, the sauce is both acidic and spicy, an animated partner for the second dipping sauce, a creamy, pumpkin-colored shichimi tartar. But calamari isn’t the only thing coming out of the kitchen’s hot oil: Try the first-rate ten vegi, tempura-fried seasonal vegetables, which, when we visited, included kabocha squash, Japanese eggplant, a jagged shiso leaf (also known as Japanese basil), shiitake mushrooms and lotus root.

Another popular menu item is the kobune: tempura jalape-o “boats” filled with garlicky spinach and topped with seared strips of Kobe beef and a perky thatch of grated raw ginger. It’s dotted with a sweet, sesame-studded miso demi-glace and daikon sprouts. The austere presentation reminded us of Andy Warhol’s art, and we reveled in the complexity of flavors: the tingle of the jalape-o, the richness of the meat, the earthiness of the spinach, the quick bite of the ginger.

FOR THE REST OF THIS ARTICLE, PICK UP A COPY OF SACRAMENTO MAGAZINE’S FEBRUARY ISSUE.