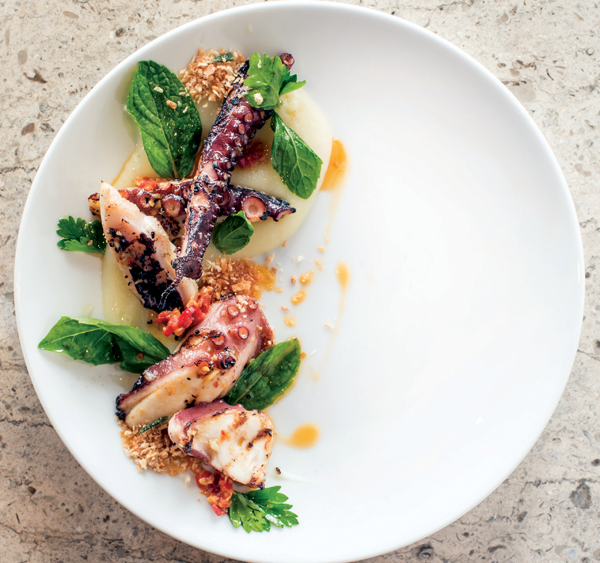 Andy Chavez had been working in the kitchen of a popular Italian tavern on Melrose Avenue in Los Angeles when the restaurant’s owner tapped him for the executive chef position at his new venture, Osteria Moto, which opened this past winter in El Dorado Hills. Chavez brought with him several recipes from his former post, but one dish, the octopus appetizer, was conceived specifically for the new restaurant and became an instant hit.

“People love it,” he says. “I think it’s because you get a lot of different flavor profiles and textures in one dish: the sweetness from the parsnip puree, the heat of the chilies, the crunch from the breadcrumbs. Every component works well together.”

The Octopus
“It’s cooked in olive oil for about three hours so that it softens, like a confit. Then we grill it to get a nice charred flavor.”

The Parsnips
“We boil fresh parnips, then run them through a blender until they’re smooth and season them with lime juice and fish sauce. We put a smear of parsnip puree on the plate and rest the octopus on top of it.”

The Chilies
“I take Calabrian chilies and chop them up, then toast them with fresh garlic and olive oil and drizzle it over the top of the octopus.”

The Panko
“There’s no seasoning or anything to them, just breadcrumbs that are toasted to give more texture to the dish.”

The Herbs
“I take a little parsley and basil and dress it in a light lemon vinaigrette and lay it on top of everything like a little salad.”