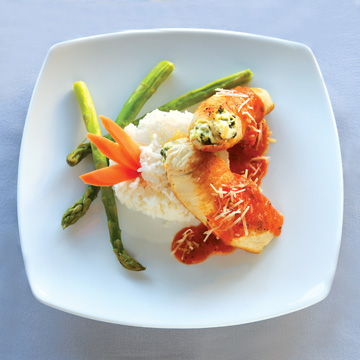 Fusion cuisine, an attempt to synthesize or integrate ingredients and cooking methods from two or more distinct culinary traditions&emdash;say, Mexican and Thai&emdash;must be an exciting source of inspiration for a chef. The problem is, forays into cross-cultural cooking often result in puzzling, dissonant dishes, which is why this style of cooking is frequently called confusion cuisine. It’s difficult to execute fusion successfully; chefs always run the risk of baffling (or turning off) their patrons when they get too creative.

The unique challenges of producing fusion cuisine didn’t daunt Pam Nanongkai, who recently opened InFusion in El Dorado Hills. The restaurant offers the most dizzying, gleeful and fearless mlange of fusion foods I’ve ever encountered&emdash;in Sacramento or anywhere else.

Nanongkai moved from the Bay Area to El Dorado Hills because she got a good deal on the restaurant space, which nestles at the foot of the Regal Cinema 14 movie theater. Her goal: to introduce Bay Area food to Sacramentans. When we asked her how it was going, she looked dubious. We’ll see, she said, eyeing us speculatively. As she walked away, my friend leaned across the table and whispered, I’m from the Bay Area, and I’ve never seen food like this before. I had to agree.

It’s difficult to characterize the menu. More than half is made up of sushi. If you really want to get a taste of sushi chef Natt Sainoi’s fusion id run amok, try some of the friskily named rolls: Tony the Tiger (made with prawn tempura, unagi, pine nuts and basil), Spank Me If U Can (cilantro, macadamia nuts and spicy eel sauce) and Thailander (shrimp, garlic, lime and&emdash;no kidding&emdash;peanut butter). I think they were supposed to be exciting, but all I could do was chew quizzically, wondering how I could be tasting peanut butter (or basil) in my sushi roll. Some ingredients, I decided, are simply better left unfused.

A plunge into the dinner favorites section of the menu elicited much better (and more harmonious) results. The salmon, a beautifully grilled fillet, was topped with a colorful mango and bell pepper salsa and came with fresh, crisp-cooked yellow and green squash. I also enjoyed the Curry Curiosity: chicken chunks in a coconut-curry sauce that sparkled with the vivacious charm of fresh ginger. The hamburger was very hamburgerish, served on a soft white roll with the requisite lettuce and tomato slices, and tasted like dozens I’ve tried in the past.

Vegetarians will be pleased: There are vegetarian rolls (tamer than their meat counterparts; the Futo, for example, contains broccoli, carrot, tamago and shiitake mushrooms) and Mushroom Mania, a baked portobello mushroom topped with wok-seared button mushrooms and drizzled with a soy-and-sake-infused shiitake black pepper sauce. I liked the Pammie Truly Veggie, which featured two chewy grilled pieces of marinated tofu in a pool of brightly flavored, spicy tomato sauce. Served with a pretty pile of freshly sauted vegetables, the dish was hearty and flavorful, perfect for a blustery day.

The restaurant’s interior is striking, with intensely colored gray walls painted to resemble metal. Recessed alcoves on the back wall feature intriguing modern artwork, including several delicate glass sculptures. A television mounted on the ceiling pro-jects onto the sushi bar overhang; the flickering images look otherworldly. Multicolored blocks of light illuminate the bottom portion of the sushi bar and an opposite wall.

I admire Nanongkai for attempting a cuisine few restaurants have negotiated successfully. If I were to return, I would stick to the menu’s unicultural items and leave the fusion dishes for more adventurous or forgiving patrons. As much as I adore chicken quesadillas, I don’t think I’d like to eat one that’s glazed with chili teriyaki sauce.

What makes it different: Many culinary cultures are represented at InFusion, from Indian and Thai to Mexican and Italian.
When to visit: InFusion is so close to Regal Cinema 14, it’s a perfect place to eat before or after a movie.
A good reason to get up early on the weekend: The multicultural brunch menu: crab cakes Benedict, Chinese prawn scramble, pancakes and Mexican chilaquiles.