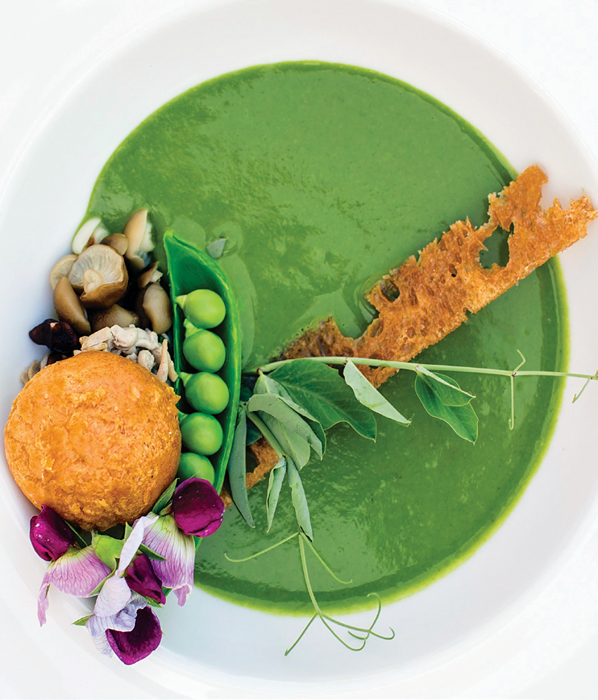 After seeing (and eating) the world, Gabriel Glasier returns to cook in Winters.

You’ve got to be fast to score a ticket to one of Park Winters’ farm dinners. Under the direction of chef Gabriel Glasier, the high-end, prix-fixe dinners are held only once or twice a month, and they sell out online months in advance.

You’ll pay $125 for a ticket (wine pairings cost extra) for anywhere from six to 12 courses of painstakingly prepared, exquisitely plated food. The experience is both luxurious and laid-back—you are eating in a barn, after all.

Located on the outskirts of Winters, Park Winters is largely a wedding and event venue; farm dinners are just a small part of what goes on there. Glasier ended up at Park Winters in March 2018 after returning from a yearlong sabbatical with his fiancée, pastry chef Kristel Flores. The pair had been running Cask & Barrel (formerly Enotria) when they decided to sell all their belongings and backpack around the world. “It was very liberating,” says Glasier.

The pair traveled through South America, Europe and Asia, living simply and eating the local food. Glasier, who’d spent his career working in high-end kitchens and running his own catering company, came home inspired and with a new, deeper understanding of food. “To be in a place and see the culture through the cuisine gave context to things I’d been cooking for 20 years,” he says. “It makes my cooking more meaningful.”

Back in Sac, he needed a job, and Park Winters owner John Martin came calling. At Park Winters, Glasier creates restaurant-caliber food for the weddings and events as well as the farm dinners. Park Winters’ farm supplies most of Glasier’s needs. He works directly with newly hired farmer Ryan Ruiz in deciding what to grow: common things like potatoes, broccoli and kale and more exotic things like female asparagus ferns, orach and chamomile.

The menu for each farm dinner is a moving target; Glasier doesn’t finalize it until a few days beforehand so that he can choose ingredients at their peak. He likes to play with color as well as flavor and texture. For a recent spring dinner, he served a pink-and-purple fish course—red trout with beets, orach and opal basil—followed by a green course of spring lamb with green tea, peas and pistachios. He’s also a sucker for dramatic presentations, once serving steaming kohlrabi soup inside a hollowed-out kohlrabi surrounded by smoking spring blossoms and topped with a crown of long, leafy stalks.

The farm dinners are relatively speedy affairs, clocking in at about two hours. Glasier doesn’t like long lulls between courses. (“People get bored,” he says.) Diners start with cocktails outside on the patio, then move inside the barn. They end the evening with s’mores by the fire pit.

As a chef, Glasier was transformed by his year of travel. His favorite meals were spent sitting on a plastic chair by a roadside, eating noodles from a street vendor. Luxury ingredients like lobster and truffles no longer wow him. He’d rather work with something humble, like tripe or a tough cut of beef. He asks himself: How do I take the simple and make it magnificent?

Glasier and Flores (now his wife) have started a food blog called Chef Travel Guide. Designed to introduce people to travel through the eyes of a chef, it’s a deeper dive into food than most travel blogs, not just listing restaurants but providing context to cultures and cuisines. Ultimately, they plan to publish food-travel books and e-books—the food equivalent of the “Lonely Planet” series.

If it sounds a bit Anthony Bourdain-ish, it is. “For a chef of my generation,” he says, “if you’re not heavily influenced by Anthony Bourdain, you’re looking in the wrong direction.” Now that he’s got the travel bug, he plans to hit the road again next March, heading to Patagonia to hike and eat. Eventually, he’d love to “live in the world full time,” he says. “Trek in Nepal, surf in the Philippines, eat pastries in Nice. There’s a different life out there. We don’t have to follow the path.”