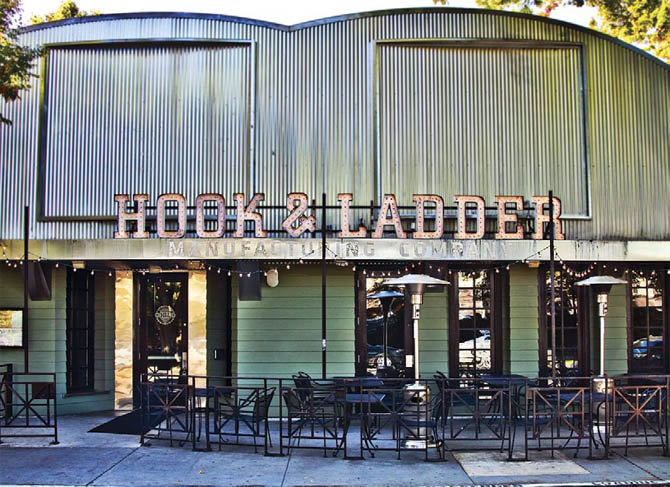 Hook & Ladder Manufacturing Company, the long-anticipated bar and restaurant from Golden Bear owners Jon Modrow and Kimio Bazett, is one of the most original spots to open in midtown in the past few years. While Hook & Ladder shares Golden Bear’s earnest approach to food and drink—quality ingredients served in hip (but decidedly unglamorous) environs—this sophomore effort represents a more refined and ambitious vision, starting with the interior.

It’s no easy feat to get a Quonset hut to exude warmth and intimacy, but that’s exactly what design duo Whitney Johnson and Tina Ross accomplished here. The look is shabby chic meets shop class: Distressed woods, billowy-fabric ceilings, charming vintage furniture and industrial-flavored knickknacks meld together in calm hues of gray and taupe. One of my favorite features is the quirky, fire hydrant-themed wallpaper along one wall that serves as evidence of the designers’ sense of humor.

The handsome yet understated bar is the domain of beverage director Chris Tucker, who established himself as something of a bartending guru at the now-defunct L Wine Lounge. My aim during a recent visit was to see what behind-the-bar magic he had conjured up for his latest gig. What I discovered was a collection of cocktails, wines and beers that was creative and unpredictable without being off-putting (although I suspect customers will appreciate more detailed descriptions of the drinks on future versions of the menu).

Two of the cocktails I sampled—the smoky, mezcal-based De la Cenizas and the bright, citrusy Bashful Bliss, made from gin, Aperol and Maraschino Luxardo—were pleasantly balanced and, frankly, delicious. Hook & Ladder also offers “cheekies”: one-ounce shots (versus the typical one and a half ounces) of tequilas, bourbons and the like. The so-called social shot, says Tucker, “allows you to buy a round for you and your friends without it all going to your head.”

A rotating selection of “draft cocktails”—premade batches of craft drinks such as Negronis and Manhattans available on tap—allows the bar to serve some handcrafted drinks in an expedited fashion, Tucker explains. The compact but wide-ranging assortment of wines (about two dozen total) includes four selections on draft and covers everything from local makers including Sean Minor and Easton to imports from Spain, Italy and Argentina. The draft beer picks show a loyalty to California makers, including Berryessa Brewing Co. in Winters, and are served from an innovative inverted draft system.

The season-conscious kitchen is headed up by L Wine Lounge veterans Brian Mizner and Greg Pilapil. A friend and I sampled some excellent duck tostadas and drooled over the pizzas being enjoyed at neighboring tables. I look forward to trying more from the appealing menu, especially the housemade pastas and lamb T-bone with root vegetables. We made our visit during a soft opening, so service was well intentioned though not quite yet polished. I’m confident, however, that there are enough customer-centric pros at Hook & Ladder that the operation will be running as smoothly and efficiently as a busy firehouse before long.