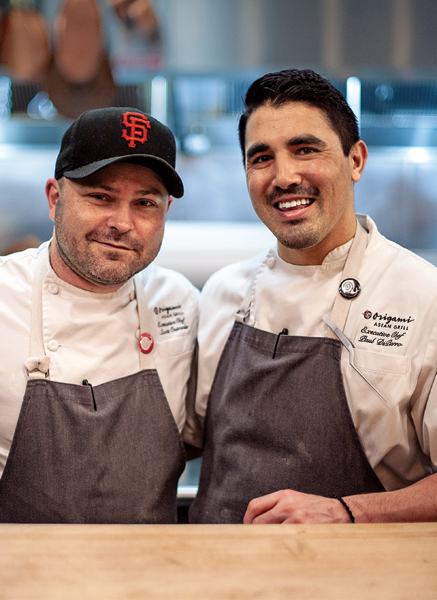 It may be the most unusual and ambitious dining experience in Sacramento.

Most of the time, Origami Asian Grill is a budget-friendly, fast-casual restaurant in East Sacramento serving inexpensive sandwiches, salads, ramen and rice bowls. But on Friday and Saturday nights, chefs Scott Ostrander and Paul DiPierro also offer a $150-per-person, 15-course tasting menu, a dining experience they call Chef’s Counter. The menu changes monthly—it might be Italian one month, modern French the next—and the fare is carefully conceived, painstakingly prepared and exquisitely plated. It’s a little like Chipotle and The French Laundry under one roof.

On weekend nights, the two concepts operate side by side. Diners—as few as two, as many as six, all with reservations—sit at a small counter adjoining the kitchen while Ostrander and DiPierro prepare and serve a leisurely two-and-a-half-hour progressive dinner. Meanwhile, a steady stream of people, some with kids in tow, come through the door, ordering at the cash register and slurping noodles at nearby tables.

This two-headed restaurant serves multiple purposes. The fast-casual side pays the bills and feeds a lot of people, while the Chef’s Counter allows Ostrander and DiPierro to flex their culinary and creative muscles. They both have fine-dining backgrounds: Ostrander worked at Alinea in Chicago, DiPierro at Meadowood in Napa, and they cooked together at Park Winters. When they opened Origami in 2018, they still wanted to continue cooking at a high level of creativity and execution. Chef’s Counter is how they scratch that itch.

Spanish tapas were the inspiration for the most recent Chef’s Counter menu. The meal started with a deceptively simple plate of marcona almonds and Spanish olives in a pool of saffron-infused olive oil and progressed to increasingly complex and intricate dishes. For a course called “Patatas Bravas,” each diner received a single pomme soufflé, a shatteringly crisp potato puff resting on a dollop of crème fraîche espuma. Ostrander likened its flavor to that of a fully loaded baked potato.

A dish of mussels and shaved asparagus in Ibérico ham consommé featured teeny “bouquets” of vegetable batons no more than an inch long. The handle of each bouquet was wrapped in a paper-thin sheet of ham, and crystal-clear consommé was poured into the bowl after it was placed in front of the person.

Standing behind the counter, Ostrander and DiPierro chatted with the diners while wielding the tools of modern gastronomy: tweezers for placing micro herbs just so; tiny scissors for removing the blossoms from pea shoots they’d foraged in a nearby park; a microplane to dust a dish with shavings from a cured egg yolk.

A dish called “Huevos al Nido” was almost too beautiful to eat. Three poached quail eggs, apparently still in their speckled shells, were perched inside a nest made of fried leeks. How am I going to peel and eat those eggs, I wondered. It turned out the shells had been removed in the kitchen and replaced with an extremely realistic-looking edible shell made of lactose powder, clay mineral and vegetable ash. For another course, steak tartare was molded into a cylinder, shingled with thin slices of avocado and decorated with dots of avocado puree and microscopic red curlicues made from the skin of a serrano chili. It looked like a whimsical caterpillar, or perhaps like a new-age sushi roll.

That the food resembles art is no accident: When concepting a dish, Ostrander sketches it on paper so that he and DiPierro can discuss, debate and refine it. Then they workshop the dish in the kitchen. One evening during Spanish tapas month, they served a sneak preview from an upcoming menu: a slice of raw wagyu beef and tiny steamed potatoes assembled on a wood board, designed to look like a campfire. Once the dish was placed in front of the diner, a thin stream of bourbon was poured onto the board and set alight to cook the beef and warm the potatoes. It didn’t quite work as planned when the bourbon flamed out before it reached the beef. They had to use a blowtorch to sear the meat.

Well-known local artist Pat Mahony recently dined at the Chef’s Counter and came away impressed with the sheer beauty of the food. “I like this better than The French Laundry,” she said. “I personally think it’s more artistic.” Her husband, Randy Getz, was similarly impressed with the food’s sophistication. “It’s elegant and creative but approachable,” he said.

The theme for April’s Chef Counter is California cuisine. For reservations and more information, go to origamiasiangrill.com or call (916) 400-3075.