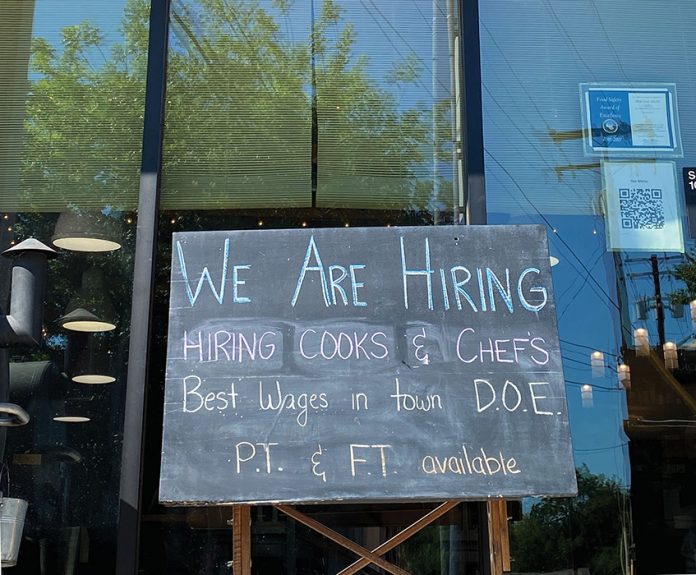 When COVID-19 jolted the world in early 2020, it became immediately apparent that the restaurant industry would be among the hardest hit sectors of the economy. But a few months ago, as vaccines became available, restrictions eased and restaurants began to reopen for indoor dining, it seemed that life might actually return to some semblance of normal.

Talk to a few restaurant owners, however, and you hear a different story. After the most difficult year in business most of them have ever experienced, they now confront a new challenge: hiring employees. Words such as “nightmare” and “catastrophic” get tossed around when they describe the situation.

“We are an industry in crisis right now,” says Deneb Williams, who owns East Sac restaurant Allora with his wife, Elizabeth-Rose Mandalou. “I’ve been in this industry for 35 years and have seen it from a bunch of different angles. And I’m not sure how the industry can move forward in its current incarnation.”

Seemingly every restaurant is running shorthanded these days, with everyone chasing after the same small pool of potential employees. While many restaurant owners have been able to hire front-of-house workers such as servers, they are having a fiendishly hard time finding workers for the back of the house: the people who work behind the scenes as bussers, dishwashers and cooks.

To compensate, some restaurants have been forced to cut their hours or days of operation, while certain new restaurants have had to operate on a severely restricted schedule or delay opening entirely. Earlier this year, Relish Burger Bar in El Dorado Hills informed diners via Facebook that it couldn’t open on Mother’s Day, as well as several days that week, because of staffing. Poppy by Mama Kim, a new East Sac restaurant serving casual California cuisine, made its debut in May as a pop-up, serving dinner only on Thursdays and Fridays, along with the occasional Saturday brunch. According to owner Kim Scott, Poppy will open more regularly when she can hire enough people to work in the kitchen.

Some local restaurateurs have resorted to cut-throat tactics more commonly associated with snagging an Upper East Side nanny, such as poaching staff from competitors or offering finder’s fees and signing bonuses. One restaurant owner recently offered $500—cash—for anybody who could find him a line cook. Others are limping along by overscheduling their existing staffers or even working in the kitchen themselves. Scott Ostrander and Paul DiPierro, owners of Origami Asian Grill in East Sacramento, have done both: Everyone, themselves included, works double shifts six days a week. The restaurant is closed on Mondays in order to prevent total crew burnout.

Why is staffing such a problem right now? There are a lot of factors, according to local restaurant owners. During the pandemic, many restaurant workers, while collecting unemployment benefits, went back to school or switched careers. Others decided they no longer wanted the long hours, low wages, hard physical labor and sometimes-toxic culture associated with the restaurant industry.

As the country was arguing over the Fight for $15 movement, restaurant owners and employees were having their own internal debate over wages. Some tipped workers say they’re tired of depending on the kindness of strangers for a major part of their income, while many back-of-house employees, paid an hourly wage, are fed up with making significantly less than their front-of-house co-workers can make with tips. Allora addressed the pay inequity issue by instituting an automatic 20% service fee and a 3% “kitchen equity” fee that is shared between all staffers, no matter their position. Back in 2019, Magpie, the highly regarded farm-to-fork restaurant in midtown, began pooling tips between the front and back of house, promising to ensure all employees make at least $20 an hour. Owner Ed Roehr makes this pitch to prospective employees: Work full time at Magpie and you can make a full-time wage of $40,000 a year. At The Shack in East Sacramento, cooks receive a share of the tips, along with a 401(k) and medical insurance.

Beyond pay, restaurant employees are looking for other, less tangible benefits: things like work/life balance and respect. Aziz Bellarbi-Salah, who owns downtown’s Brasserie du Monde (formerly known as Brasserie Capitale), knows from personal experience what restaurant employees have to deal with: At the height of the pandemic, when he cut staff to the bone to save money, he personally delivered food to customers’ homes. Now, he says, is a great time for young, untested people to get into the industry. “We’re much more willing to take in inexperienced people and train them,” he notes.

Diners also have a role to play in this staffing drama. As Roehr put it, “Guests have to figure out what they want and what they’re willing to pay for.” For restaurants to pay cooks and dishwashers a living wage, that $10 burger is likely to cost you $15 or more. “Restaurant workers literally put their lives on the line during COVID,” says Allora’s Williams. “We have to decide in our industry that good food is worth paying for.”