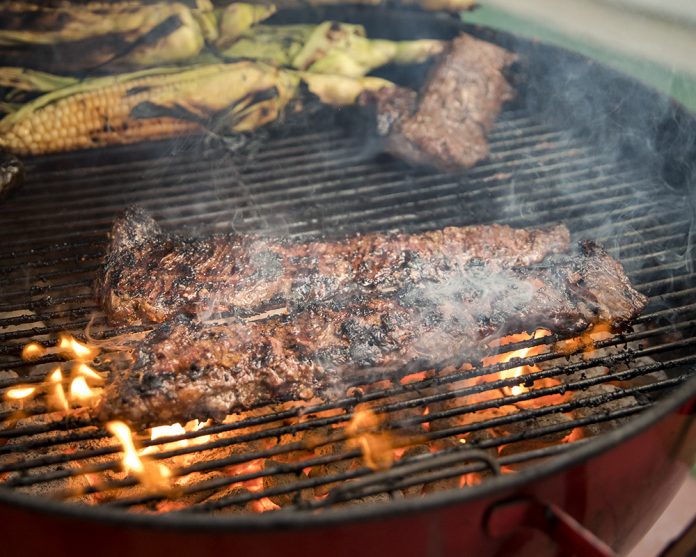 Cecil Rhodes grew up grilling. As a little boy, he watched intently as his father mounded the charcoal in his trusty Weber, soaked it with lighter fluid and lit it with a crumpled newspaper. By the time Rhodes was 8 or 9, his father was letting him start the fire on his own. Then they would watch baseball or football on TV while chicken thighs or massive beef ribs cooked over the gray coals. “It was a bonding moment for us,” Rhodes recalls.

Today, Rhodes co-owns Nash & Proper, a popular food truck and brick-and-mortar business that serves Nashville-style hot chicken, and a catering company called Cecil’s Taste. On the weekends, he’s at home, cooking outdoors for his wife and two kids. “If it’s not pouring rain, I’m outside cooking,” he says. 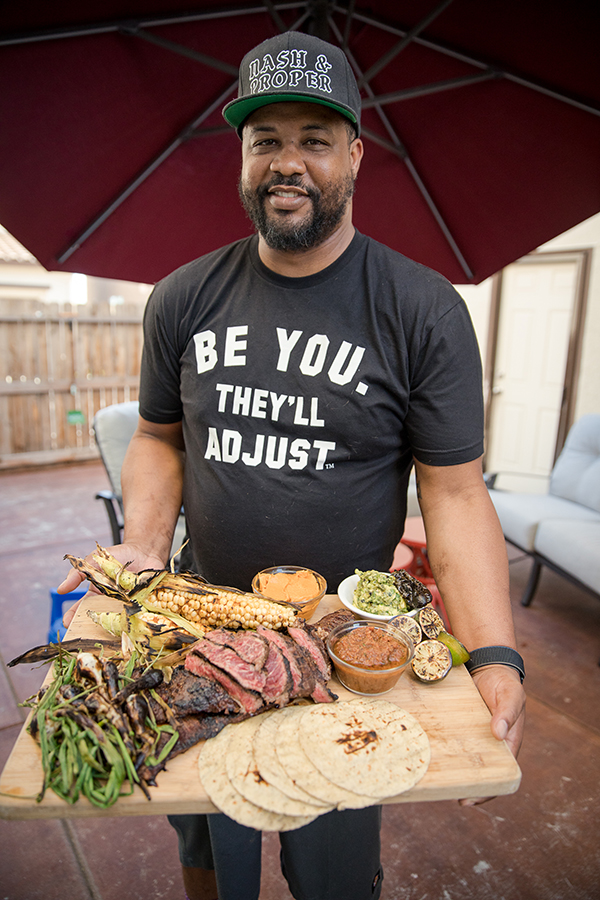 His outdoor setup includes a Weber Kettle grill for grilling steaks and seafood, and a Traeger smoker for longer cooks such as ribs and brisket. (He also bakes brownies, pizza and cornbread in the Traeger.) When it comes to barbecuing, Rhodes is old school, using Kingsford charcoal and lighter fluid because “that’s what my dad used.” But he has a few tricks up his sleeve: He throws a handful of mesquite chips on the coals to make carne asada, and he tosses grilled vegetables with vinaigrette when they’re just hot off the grill so they soak up the flavorful liquid.

One of his favorite outdoor dishes is grilled skirt steak tacos with fire-roasted salsa, charred guacamole and grilled corn. To ensure that every component tastes of the fire, he cooks onions, tomatoes and peppers directly in the coals, places Sonoran tortillas on the grill for a nice char and slathers roasted corn with smoked paprika butter. Then he piles it all on a platter and lets everyone dig in. “It’s a crowd pleaser,” he says. 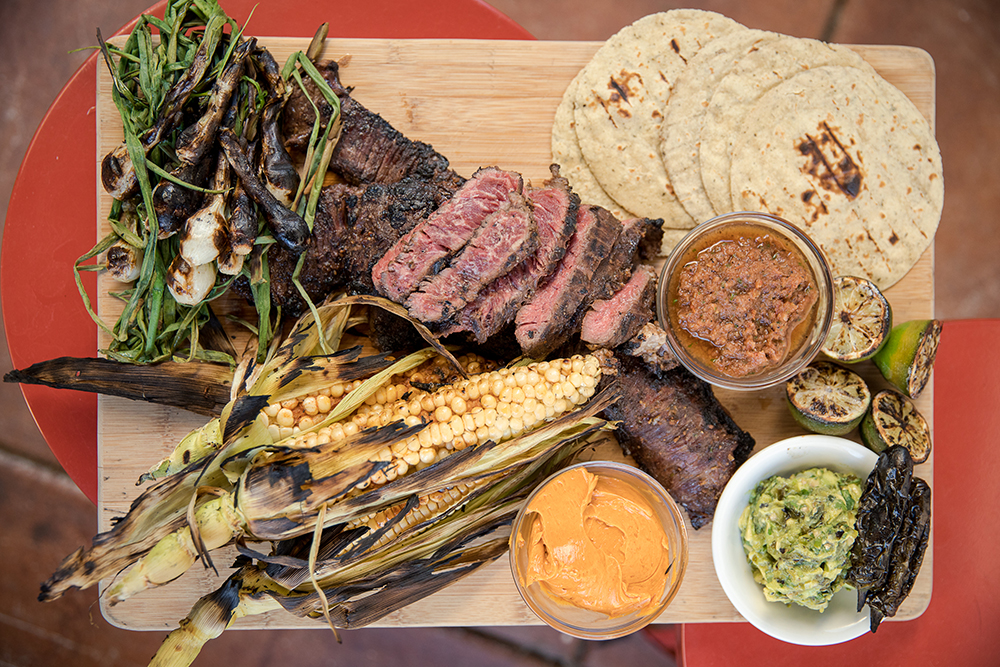 Char and smoke are essential ingredients in the accompaniments to these tacos: fire-roasted salsa, charred guacamole and corn on the cob with smoked butter. Serves 4

To make a marinade, place green onion, garlic, Worcestershire sauce, soy sauce, cilantro stems and oil in a blender and blend until smooth. Place steak in a resealable plastic bag, add marinade and close the bag. Let sit at room temperature for 1 hour.

Grill spring onions until charred and tender. Grill tortillas until soft and pliable. Slice steak thinly across the grain and arrange on a large platter with spring onions and tortillas. Serve with fire-roasted salsa, charred guacamole and corn on the cob with smoked butter. 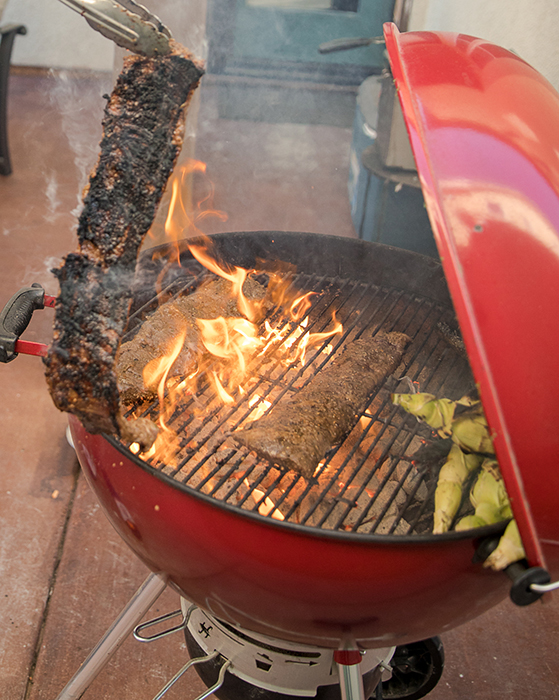 Prepare grill for grilling. Using aluminum foil, make three packets, one for tomatoes, one for jalapeños and one for garlic. Place foil packets directly on coals and roast until packet contents are blistered and blackened on all sides. Cool, then peel tomatoes, collecting all the juices with the tomatoes. Remove stems from jalapeños and peel papery skins off garlic. Place jalapeños and garlic in a blender with ¼ teaspoon kosher salt and blend until smooth. Add tomatoes and their juices to blender and pulse a few times until you have a coarse-textured puree. Pour into a bowl.

Add chopped onion, cilantro and lime juice to tomato mixture. Season with salt to taste. If salsa is too thick, add water to thin. 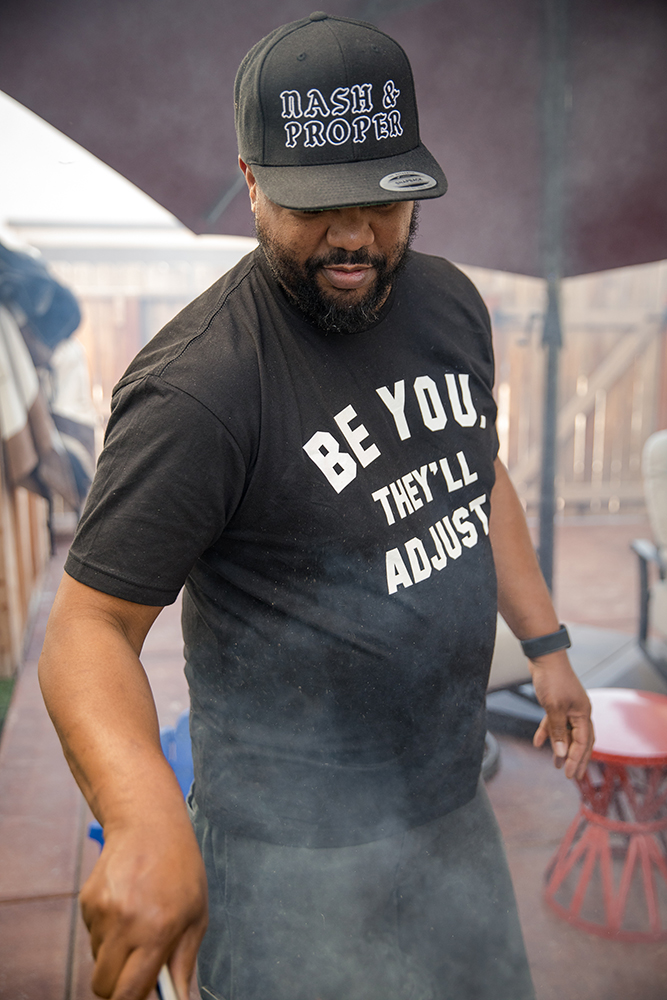 Put green onion, jalapeño and lime halves in a bowl and drizzle with vegetable oil. Place them on a screaming-hot grill and grill until charred. Remove from grill and let cool. Thinly slice cooled green onion and mince jalapeño. Juice lime halves. Retain the juice while tossing the lime halves.

Place green onion, jalapeño and lime juice in a medium bowl. Add avocado, garlic and cilantro and stir to combine. Season with salt to taste.

Corn on the Cob With Smoked Butter

4 ears sweet corn in their husks

Place butter in a small bowl and add seasonings. Mix to combine, then set aside.

Soak ears of corn in cold water for 30 minutes. Pull back husks on each ear of corn, leaving them attached at stem. Remove and discard corn silk, then pull husks back over corn. Grill corn over direct fire until tender, about 25–30 minutes. Don’t worry if husks are brown or burned. Remove from grill. When cool enough to handle, carefully pull husks back and slather corn with smoked butter. 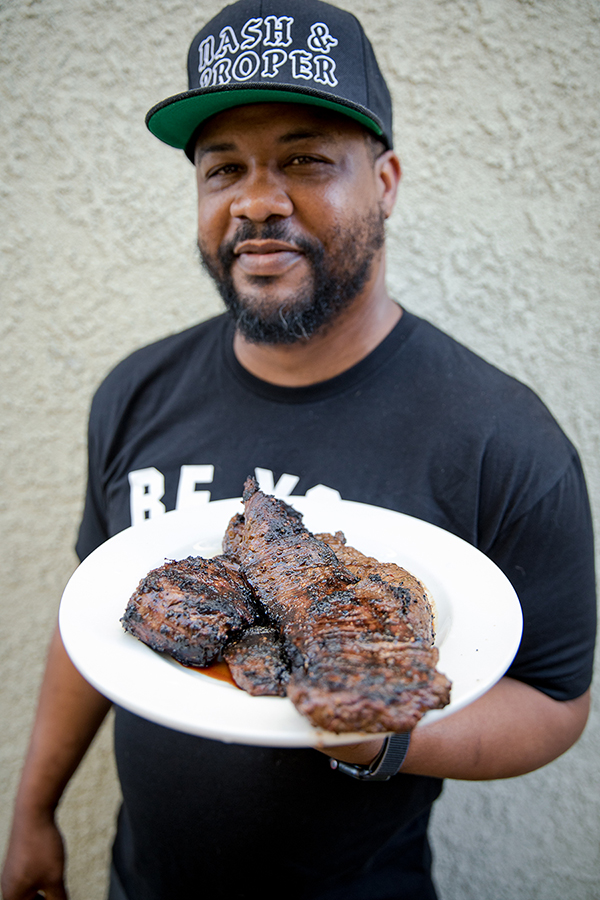