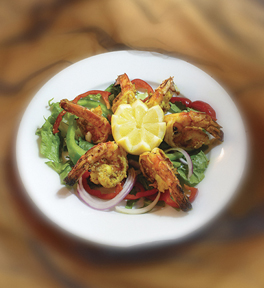 You may not have felt it, but there has been a silent seismic shift in the Sacramento dining landscape. A new player has entered the restaurant fray&emdash;one that is introducing upscale, white-tablecloth Northern Indian cuisine to a region accustomed to low-budget, humble Indian fare.

Gaylord’s management planned a soft opening in March (with no advertising or public relations efforts in the first several months) in order to allow restaurant staff the time and space it needed to find its groove. It became clear from our visits, which all occurred about a month after the restaurant opened, that the front-of-the-house staff needed that time and space. The service we received during our four visits was erratic. One night, we were waited on by a grim-faced staff member who identified himself as one of the restaurant’s chefs. On another visit, we were served by the manager, who took over our table in exasperation after we were caught roaming through the restaurant in a vain search for our waiter.

But while we endured service gaffes, the kitchen was executing superb food. On our first visit, as we sniffed our steaming keema matar (a spicy ground lamb curry dotted with peas) and dragged a wedge of the fantastic tandoori oven-baked naan (a traditional flatbread) through the stew, our surroundings faded to a blur.

The traditional tandoori oven plays an important role at Gaylord. The clay oven’s fiery interior exceeds 1,000 degrees, quickly searing meats and producing light, spongy flatbreads with crackly exteriors. We are crazy about the breads&emdash;there are 10 varieties from which to choose. Don’t miss the wildly delicious, aromatic garlic naan; the paratha, a buttered and layered whole-wheat flatbread; or the intriguing kabuli naan, stuffed with chopped cashews, golden raisins and&emdash;no kidding&emdash;chunks of maraschino cherries.

Almost everything we ordered eventually made its way into or on top of a piece of bread.

The six-page menu is divided into tandoori oven items, curries, seafood dishes, vegetarian dishes and biryani (savory rice). Menu descriptions can be somewhat unsatisfying if you’re not familiar with Northern Indian cuisine (the description for fish tikka kabab, for example, simply reads cubes of fish marinated and cooked). We also found that our waiters had varying degrees of knowledge about preparations and ingredients. It’s best to simply pick something that sounds intriguing and plunge in. That’s what we did, and we were always happy with the results.

One of the big hits at one meal was the Bombay chicken wings. Roasted quickly in the tandoori oven, they were spicy, moist and succulent, lacking the mouth-coating, oleaginous texture of American-style wings. The vegetable pakora, another favorite appetizer of ours, is an irresistible medley of cauliflower, onion and potato, dipped in a spicy batter made with Indian chickpea flour and deep-fried.

We swooned over the skewered salmon, marinated in yogurt and cooked in the tandoori oven. The fish’s spicy exterior was delightfully crusty, the interior perfectly moist. A lamb curry of special note is the rogan josh, a spicy, traditional Kashmiri dish prepared with tomatoes and red peppers. We found the meat slightly dry and chewy but bursting with complexity and bright, hot flavors. We doused the heat with a gulp of the restaurant’s fruity lassi, a popular Indian beverage prepared from yogurt and pured mango. If you like mouth heat, as we do, try the aloo gobi, an innocent-looking vegetarian dish prepared with cauliflower, potatoes and green bell pepper that scorches the palate with spicy-hot torridity.

More mildly flavored choices include the saag paneer, creamed spinach punctuated with tangy, sturdy chunks of housemade farmer’s cheese. Although its murky appearance isn’t as appealing as some of the dishes, its earthy, velvety-soft, spinachy charms soon won us over. We also adored the creamy chicken tikka masala, mesquite-broiled and served in a gentle tomato butter sauce.

Perhaps the best way to experience Gaylord’s cuisine is to visit during lunch, when the restaurant sets up a handsome buffet for diners, including condiments, salads, entres and desserts such as the traditional gulab jamun, housemade cheese dumplings dipped in sweet syrup. At $11.95 per person, it’s a great bargain. We also enjoy the buffet because naan is (in theory, anyway) instantly delivered to your table when you sit down (always nice when you’re famished) and interaction with waiters is kept to a minimum, since patrons essentially serve themselves. But if you want to experience Gaylord’s full menu, you’ll need to visit in the evening. You may have to prowl around a bit to find your waiter, but we guarantee it will be well worth the effort.

If you can’t stand the heat: Order the mild chicken pakora: boneless chicken chunks dunked in chickpea batter and deep-fried to a lovely brown crispiness.

Mix it up: Try the tandoori mixed grill of chicken, ground lamb and fish, served with piles of pillowy naan.

Prix fixe: Gaylord offers four Indian Royal Feasts ($19â€“$29 per person); they include choice of dessert and tea or coffee.