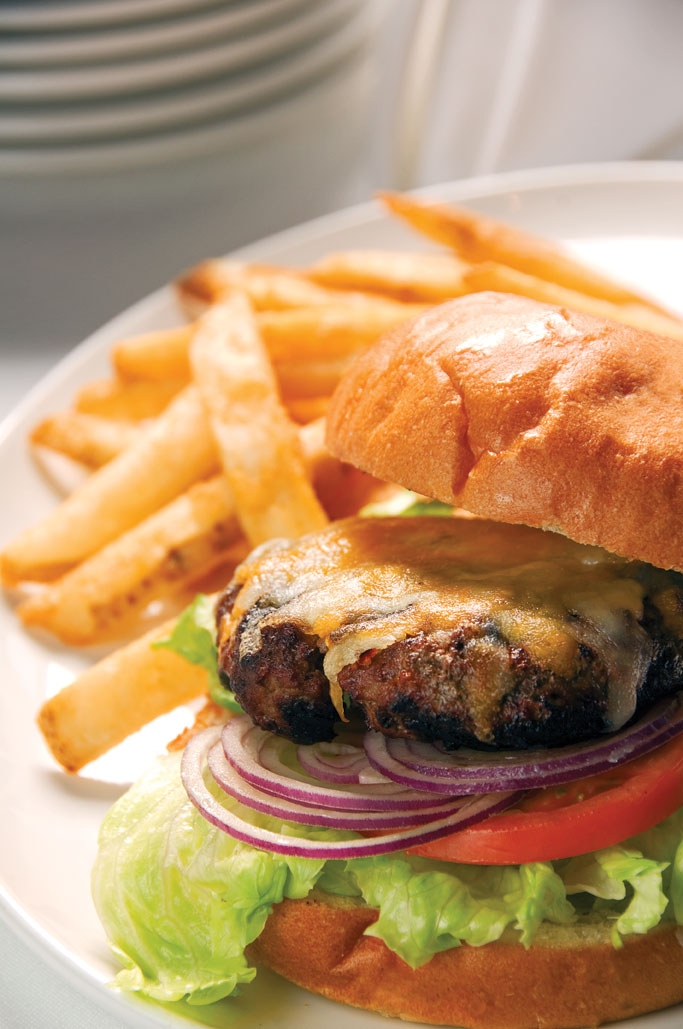 According to an old Chinese proverb, the beginning of wisdom is to call things by their right names. I wonder if the owners of G.V. Hurley’s spent much time contemplating how the name of their restaurant (a compilation of the partners’ surnames and business names) might be perceived by Sacramento diners. I might be way off here, but G.V. Hurley’s sounds more like a sports bar than the stylish, upscale restaurant it actually is. In fact, it happens to be one of the most appealingly designed new restaurants I have encountered recently. And while it does attract a young, fashionable, brightly social crowd on weekend evenings, it’s clear that owners Steve Goodwin, Brian Vail and Pete Geremia have created a space (and a menu) for both buttoned-up business lunchers and sophisticated diners.

Hurley’s, which opened on the 2700 block of J Street at the end of March, has an airy, elegantly rustic interior. Craggy exposed beams are juxtaposed against smooth tan walls, and a sumptuous bar swoops around like an elegant horseshoe, with wide, studded, beige-leather bar stools that made me think of saddles. A handsome stone fireplace at the front of the restaurant serves both inside and outside diners. Roomy booths, with seats as springy as Grandma’s 1955 Packard, line the left side of the restaurant. There’s also a very snug outdoor dining area, reminiscent of Paragary’s patio over on 28th, with a similar corrugated-steel-topped open bar and a whispery, wall-length waterfall. During the day, this is a delightful (though elbow-to-elbow) spot to dine, but it tends to get overly crowded in the evenings.

Executive chef David Hill offers up his version of regional American cuisine at G.V. Hurley’s. His menu is fun and interesting, featuring a long list of small plates that you could easily build into an appealing meal. Southern-inspired items like lobster corn dogs and buttery shrimp and grits provide Sacramentans with something a little different. Barbecue pork soft tacos, made with captivating sweet-spicy meat and feisty chipotle sauce, are tasty. Fried calamari, with an innovative, slightly sweet graham cracker batter, is another unusual (and flavorful) choice, as are the macaroni and cheese poppers, which were too rich for my taste but were wildly popular with the children in our group.

Salads are enormous and could easily feed two. The artisan lettuce salad, featuring gorgeous greens from Del Rio Botanical farm in West Sacramento, was bursting with vibrant blood-orange slices, crumbly Humboldt Fog goat cheese and toasted pecans. Despite its overly sharp red-wine vinaigrette, it was a hefty, satisfying lunch. Another rib-sticker was the chopped salad, with shredded chicken, applewood-smoked bacon and a plethora of other goodies (including avocado, sliced apple, hard-boiled egg and blue cheese). This is the salad to order if you’re planning to skip dinner entirely. The wild-salmon and beet salad was lovely, though the stringy chunks of soft kabocha squash tossed into the mix struck me as incongruous and very unappetizing.

The dinner menu is hearty and meat-focused, featuring items like griddled hamburger steak and slow-roasted barbecued baby back ribs. You’ll find that Southern touch in the Low Country boil (a traditional Southern stew of shrimp, sausage, corn and potatoes) and the buttermilk-battered fried chicken. One evening, a slab of textural meatloaf&emdash;persistently recommended by our waiter&emdash;was served on a pile of alarmingly buttery potatoes and doused with thick, slightly glutinous mushroom gravy. My companion’s flank steak was tepid, although the meat was chewily flavorful.

While the kitchen seems to be on a solid footing with its savory items, it lacks confidence with its desserts. The ones I tried, though pleasant and attractive, were heavy and overly rich, providing no respite from&emdash;or clean finish to&emdash;a heavy, rich meal. A trio of cheesecakes (pistachio, sweet potato and blueberry) was a fun concept but tasted slightly stale; a warm croissant bread pudding, dotted with raisins and small chunks of chocolate, was quite tasty but would have been more appealing for breakfast or brunch. The restaurant’s s’more waffle was clumsily conceived: two bready, ginger-flavored waffles enclosing four toasted (but room-temperature) marshmallows, drizzled with copious amounts of chocolate sauce and accompanied by a semi-melted stick of Hershey’s chocolate. As any camper knows, the utter delight of the s’more is the contrast between the thin, crunchy graham cracker, the hot, sticky marshmallow and the creamy, sort-of-melted chocolate. Any deviation is, in my opinion, a recipe for disappointment.

Dessert issues aside, G.V. Hurley’s is a delightful new addition to the J Street restaurant corridor. And if you are lured in by the sporty, jaunty name, it’s perfectly OK to pull up a bar stool, order a burger and a beer and catch the game on one of four televisions suspended on the restaurant’s beautiful brick wall.

Live cooking channel: A free-standing dining bar for four faces the kitchen’s line&emdash;the perfect spot for watching the cooking process up close
Go for the green: The Caesar salad is fabulous and tangy, topped with crunchy rosemary croutons
Bargain alert: Kids 12 and younger can order a half-portion of any item on the menu for half price