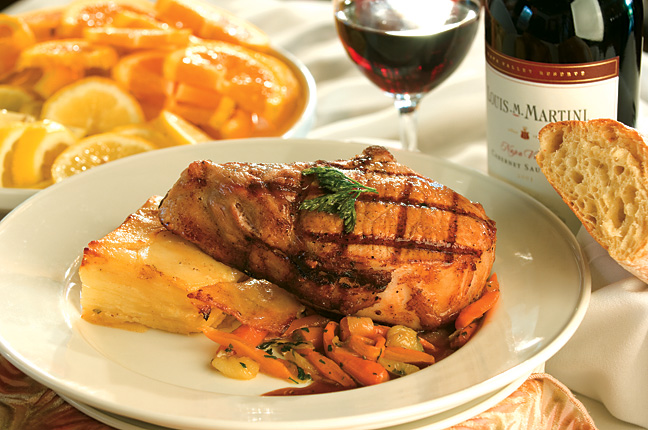 I generally avoid hotel restaurants. They often feel institutional and impersonal, catering to people whose focus is on business or vacation and rarely on the food.

But it appears that the Sacramento Marriott in Rancho Cordova is intent on changing the minds of people like me. There are some undeniably exciting things coming out of the kitchen at the hotel’s new restaurant, Formaggio Taverna and Patio.

Fresh from cooking stints in the Napa Valley, chef David Boswell has ambitious plans. Boswell characterizes his cuisine as upscale rustic Italian, prepared with Northern California ingredients, which he hopes one day to source exclusively from within 150 miles of Sacramento. Dishes are, for the most part, assertively flavored and feature lusty, earthy components such as fresh sage, peppery arugula, wild mushrooms and aged pecorino cheese. Already producing his own focaccia and mozzarella, he’s busy organizing a cured-meat program and is moving both bread and gelato production in-house in the near future.

There were a number of small, quiet surprises in my meals at Formaggio. Warm, crusty bread was served with olive oil adorned with several cloves of deeply roasted, sweet garlic. It would be easy to leave out the garlic&emdash;no one would be the wiser&emdash;but the kitchen staff took the time to roast the garlic and carefully pry the cloves out of their tightly bound, parchmentlike nest so that diners would have the singular pleasure of spreading these delicious nuggets of caramelized flavor on their bread.

One evening, I ordered the diver scallops, which had been dredged in porcini flour and sauted. While the scallops were somewhat tough and leathery, I was amazed to discover freshly shelled, deep-fried green garbanzo beans accompanying the shellfish. Fava beans&emdash;another legume known for its maddeningly tedious preparation (you have to remove two separate shells from the beans in order to cook them)&emdash;also make an appearance on the menu. And the capellini, a buttery, spicy tangle of thin pasta strands, was dotted with chunks of roasted tomato, which lent an intense smack of summer to the dish. The kitchen could have gotten away with simply using gorgeous, fresh tomatoes, but Boswell oven-roasted them, an extra step that turned an average dish into a memorable one. To me, these little gestures speak volumes about his dedication to his customers.

I easily could make a meal from the appetizer list. In one dish, comforting, creamy polenta is laced with hunks of wild butter boletus, chanterelle and morel mushrooms. For another, Pinot Grigio-steamed mussels and cockles are adrift in a spicy, jalapeÃ±o-studded red broth. The Caesar salad, an unruly jumble of romaine and radicchio leaves, was coated with a captivating, garlicky dressing, but I was put off by the room-temperature greens, which had been cruelly robbed of their crispness.

Noteworthy entres include salmon saltimbocca, which bore no resemblance to traditional veal or chicken saltimbocca. Delightfully crispy on the outside, the fish boasted a just-barely cooked interior and was blanketed with a trim red tongue of tomato conserva, a concentrated, intense marinara sauce. Perched atop a stew of tender white beans and silky spinach leaves, the salmon was heartily satisfying and beautifully presented.

The grilled double pork chop was irresistibly tender, though salty, and its accompanying Parmesan potato gratin, was watery and gummy. Boswell’s creative penne was tossed with springy rock shrimp, brownish florets of caramelized cauliflower, toasted almond slices and chewy bits of guanciale, an Italian-style bacon made from pigs’ jowls. While the dish was overly salty, I enjoyed its interesting combination of flavors and its spicy afterburn on the palate, the result of a generous addition of chili oil.

Formaggio offers a platter of three traditional dry-cured meats&emdash;sopressata, cappacola and mortadella&emdash;all prettily fat-speckled and distinctively flavored. The kitchen paired the thin meat slices with a pile of house-pickled vegetables whose vinegary sharpness initially made my toes curl. The best of the bunch was the okra, which was wonderfully crispy with no trace of its characteristic sliminess, but I also enjoyed the yellow wax beans and the shiny wedges of white onion.

Boswell has a few pastry tricks up his sleeve as well. His warm lemon budino (Italian for pudding) cake is fabulous: a layer of light, citrusy cake, thinly shellacked with a tangy huckleberry sauce on top of warm, refreshing lemon pudding. And the palm-sized crostata&emdash;a small, open-faced pie&emdash;was crammed with slices of baked, sumptuously ripe plums and nectarines, a fruity celebration of the season. The tiramisu, however, was bland and heavy, with a dull, cheesy flavor.

The dining room at Formaggio is ebulliently colored, with striped carpets and boxy orange lamps that sway gently overhead. Fresh sunflowers sprout from lanky vases, and the warm stone walls feature backlit glass shelves that display red-wine bottles labeled simply good, decent and cheap. A small bar looks out onto the hotel’s lovely patio. The stage seems to be set for this hotel to make an impressive impact on the dining scene in Rancho Cordova&emdash;and the Sacramento region.

What makes it special: Where else in Rancho Cordova can you order pappardelle pasta with braised Sonoma rabbit?
Start your meal: With a frosty Italian mojito, stuffed with fresh lime slices, roughly chopped fresh mint and basil, and a generous addition of Prosecco sparkling wine
Don’t miss: The creamy polenta with its toothsome array of wild and locally grown mushrooms