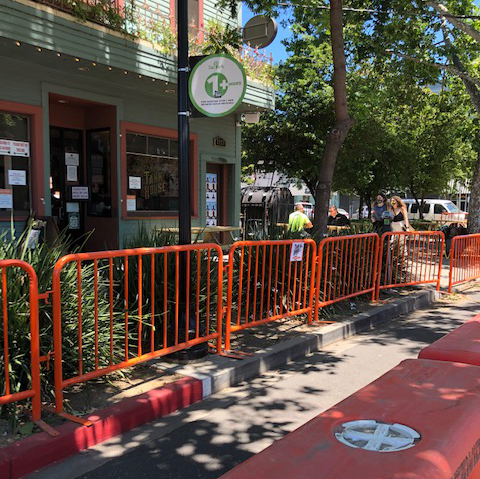 Aioli, Tank House, Mulvaney’s B&L, Paragary’s, The Golden Bear and Zocalo are just a few of the restaurants participating in F2FAF, as the program is called. City Councilmember Steve Hansen and U.S. Rep. Ami Bera came up with the idea as a way to help restaurants get back on their feet financially after dine-in service was shut down for more than two months due to the pandemic.

Although restaurants are now allowed to reopen for dine-in, they have to follow strict social-distancing guidelines that require at least six feet of space between tables. For most restaurants, that rule cuts down significantly on the number of diners who can be served.

F2FAF created expedited permitting for restaurants to spread out onto public rights of way such as streets and sidewalks. Tyler Williams, owner of Tank House, a barbecue restaurant and bar in midtown, was impressed with the ease and speed of the process. “I have to say I’ve never had an easier experience with the city,” said Williams, who also owns The Jungle Bird and Ten Ten Room. 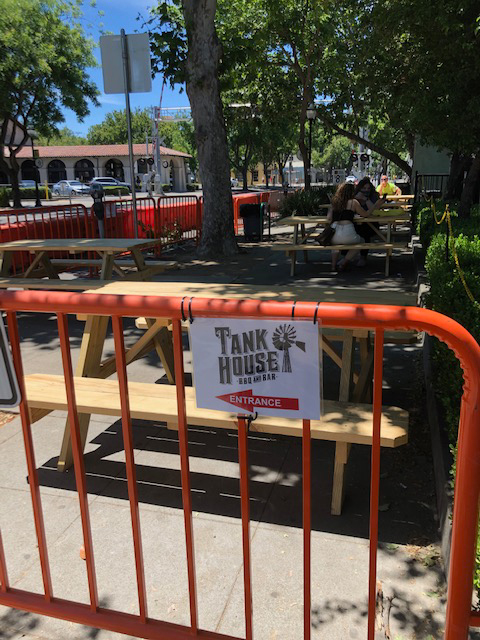 Williams wanted to take over the entire sidewalk in front of his property along J Street, adding 44 seats. He submitted a permit application on Sunday, May 24, and received a call back from the city the next day, which just happened to be Memorial Day. “I was floored,” said Williams. “The city does not call you on Memorial Day.” A city staffer came out on Tuesday for a site review, and by Thursday the new patio was open. It cost Williams only $100 for a state ABC permit to serve alcohol on the patio; the city permit was free.

With the sidewalk now turned into a dining space, Williams had to carve out a safe place for pedestrians to walk. Under the city’s direction, he created a pedestrian corridor in the street, using bright-orange traffic barricades at the edge of the sidewalk and, on the street side, a wall of interlocking orange plastic tubs filled with water. If a car hits the water wall, the tubs won’t move. Williams furnished the new patio with wooden picnic tables spaced six feet apart and shaded by trees.

The City Council voted to fund F2FAF with $1 million from the federal CARES Act, designed to address the economic fallout from COVID-19. The money covers staff costs and can also be used to help restaurants pay for things like picnic tables and traffic barricades. The program is set to expire in a few months.

In East Sacramento, Selland’s Market-Café applied for a permit to build a wooden-deck patio in its parking lot. Now under construction, it’s scheduled to open next week and will add 12 tables, with about 48 seats, to the small eatery. According to company co-owner Randall Selland, the temporary structure will be up at least through the summer and can be taken down and stored “for the next pandemic.” The patio replaces several off-street parking spots that were required under the restaurant’s original permitting. F2FAF enables the city to lift that requirement.

There is some talk about closing entire streets—or parts of streets—to car traffic for restaurant use. The stretch of 20th Street between J and K (home to the MARRS building) and parts of R Street are two possibilities being considered.

Expanding outdoor dining spaces is a no-brainer for Sacramento, with its many months of temperate weather. Diners are also more likely to want to eat outdoors, given the growing body of evidence that the coronavirus is more easily spread indoors.

Tank House’s Williams said his new sidewalk patio gave him some financial breathing room. “On the first Friday after the patio opened, our business was almost consistent with a regular Friday prior to COVID,” he noted.  He’s now fielding calls from restaurant owners interested in expanding their patios the way he did. “I don’t see why anybody wouldn’t do it at this point,” he said. “It’s how restaurants can start coming back.”