More than two years after getting fired from his namesake restaurant, Lou Valente is back and better than ever.

The former Lou’s Sushi frontman debuted Southpaw Sushi on a suddenly bustling stretch of Del Paso Boulevard last August. The restaurant is Valente’s first project since his unusually high-profile 2017 breakup with former partner Daniel Walsh. A 2018 settlement left Walsh as the sole owner of Lou’s Sushi, and he rebranded the popular eatery as Midtown Sushi.

Today, though, the left-handed Valente only wants to look forward to Southpaw Sushi. He spent his time off working part time under Shige Tokita at Shige Sushi in Carmichael. “I put myself back into apprentice mode,” Valente says. “I didn’t realize how much I learned from Shige until I started working by myself—slicing the fish, storage of the fish, ordering fish, new fish that I’d never used before.”

Valente brought that knowledge to Southpaw Sushi, simplifying his rolls and ordering higher-quality fish. “I learned from Shige-san where to get that kind of stuff,” he says. “And then the sushi rice is a lot better than it was at Lou’s Sushi because I’m making it.” Since Southpaw is open only for dinner, Valente makes the rice and cuts the fish himself, rather than assigning those tasks to a less-experienced employee.

As for the pared-down sushi rolls, reducing the number of ingredients partly came from wanting to serve “cleaner flavors,” according to Valente. It also sprang from the logistical demands of expanding from the 30-seat Lou’s to a 66-seat space. “We needed to streamline things a little bit,” Valente says. “Making eight jalapeño slices for every one roll on the menu gets a little tedious.” 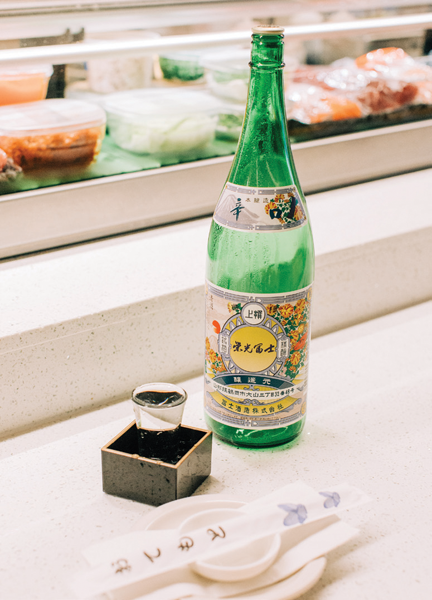 A native of Philadelphia, Valente became obsessed with sushi the first time he tried it. He got a job washing dishes at a Japanese restaurant in Los Angeles and eventually moved to San Francisco to apprentice under Kiyoshi Hayakawa at Ace Wasabi. Valente opened Sushi on the River in Sacramento in 2000, and he worked at Taka’s Sushi and Zen Sushi before opening Lou’s in 2013.

Southpaw Sushi joins an Old North Sacramento food-and-drinks scene that now includes King Cong Brewing Company, Woodlake Tavern, Shift Coffee House and D’s Smokin Pit. Bars in the area have long struggled to draw diners off the grid, but there’s a new energy in the area. At any rate, residents from nearby neighborhoods like Woodlake are ecstatic.

“The reaction from our neighbors has been awesome,” Valente says. “Everybody is so happy to have a nice brewery, a nice coffee shop, a nice restaurant. They’ve been waiting 20 years for this, and they deserve it.”—Daniel Barnes