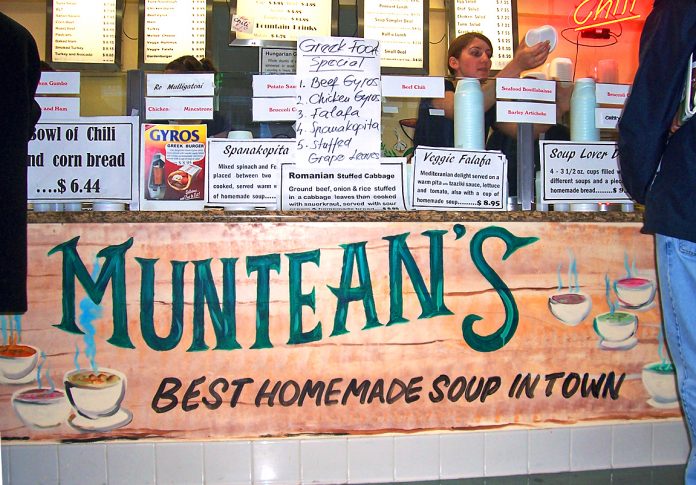 There’s nothing like a substantial, nourishing bowl of soup on a gray, blustery day to warm the soul. If you’re feeling chilly, I’d suggest a visit to Muntean’s on J Street, which specializes in hearty housemade soups. Opened several months ago by the friendly folks who used to operate Hannibal’s at the Downtown Plaza, this plain little café offers an enormous variety of soups – all available for sampling. In fact, as I was trying to decide which soups to take home, I was eagerly offered six large samples which (after I slurped ‘em down) took a serious edge off my appetite. However, I ended up with three tasty choices: a robust corn-flecked chicken gumbo, a thick and meaty mulligatawny (Muntean’s most popular soup, I’m told) and a light, fragrant artichoke-barley. Packed into my to-go bag was also a huge wedge of airy, just-sweet-enough cornbread, perfect for soup-dunking. The cornbread and soups were gobbled up with great enthusiasm by my appreciative family as soon as I got home. Note: Muntean’s also offers an enticing lineup of hot and cold sandwiches and salads.