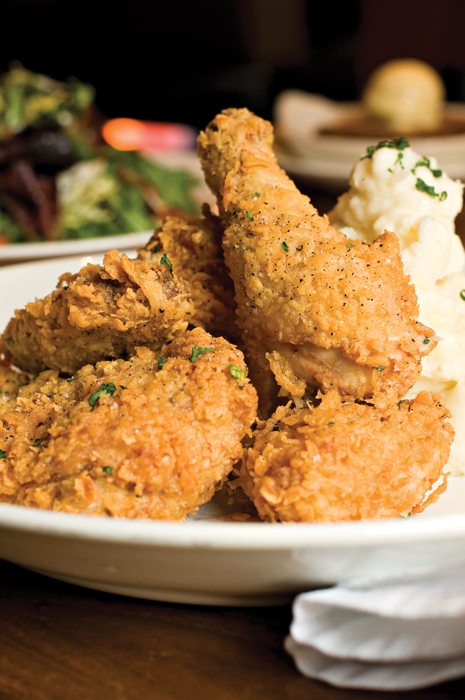 Sacramento isn’t known as a trendsetting food city. But by the time the foodie website Epicurious.com called fried chicken one of 2010’s top food trends, we were already there.
We’re not sure who got the party started. But when Paul Martin’s American Bistro added fried chicken as a weekly special in October 2008, it was one of the first upscale local restaurants to pay homage to this down-home classic.
Brian Bennett, managing partner of the Roseville eatery, admits he borrowed the idea from Thomas Keller’s famous Ad Hoc restaurant in Yountville. “I went there on a Sunday, and they were serving fried chicken as the dish of the day, along with a great little organic baby green salad, roasted potatoes and a simple cookie,” remembers Bennett. “I said to myself, ‘If people are standing in line paying $50 for this, they’ll definitely come to Roseville and pay $18.95.’” Paul Martin’s three-course fried chicken special now has a cult following, according to Bennett. “If you came here every Tuesday, you’d see the same people in the room, sitting at the same table they do every Tuesday, eating chicken.”
At downtown’s Grange, fried chicken is part of a three-course meal ($35) every Thursday and has been on the menu since day one, according to executive chef Michael Tuohy. “It’s a little something I brought back from my ‘Southern exposure,’” says Tuohy, who spent more than 20 years on the Atlanta restaurant scene before landing in Sacramento. “It sells out every week.” Likewise, fried chicken is so popular at Hawks that it’s now a monthly staple as part of a four-course meal ($35) on the Sunday Supper menu. “Nicer restaurants are looking for a way to do something that’s dressed down a little bit,” says Molly Hawks, co-chef/owner of the Granite Bay restaurant. “I think in this economy, we’re going to see more comfort food in restaurants.”
Part B to the fried chicken trend? Buttermilk, in which each of these three restaurants soaks the chicken before frying it up nice and crispy. Add that to your list of trends for 2011, Epicurious!