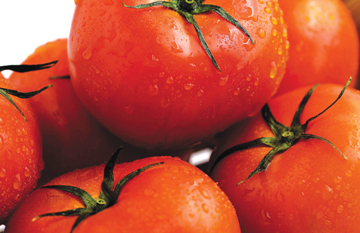 The easiest gardening exploit in Sacramento&emdash;growing tomatoes&emdash;stumps this Renaissance man.

A dozen years ago, a co-worker in Torrance learned I was moving to Sacramento and said something like, Oh, yeah, Sack o’ Tomatoes. When I drove up Interstate 5 toward my new job and new life that fall, I recalled his words as I saw semis groaning with tomatoes, some of the red fruit tumbling off the trucks’ huge piles to go splat on the road.

I wonder if I can grow tomatoes up here, I mused behind the wheel. That thought was little different from my wondering if I could knit a sweater. Just as I had never picked up a knitting needle, I had never purchased, tended to or aspired to possess even a houseplant. The only thing I had grown during my 16 years of dormitory and apartment life was older.

Nevertheless, I was in one of those moods where everything was new, and everything was possible. The old me (a rent-paying couch potato) was about to give way to the new me (a mortgage-holding Renaissance man). No longer was I going to live in a place where real estate prices were astronomical, as they had been near my previous employers in northern New Jersey and Greater Los Angeles. Plus, I would be making bigger bucks at my new job&emdash;big enough to buy a house, but not so big as to hire someone to do the
landscaping and tend to my outdoor plants. That was OK. I wanted to get my hands dirty.

Tomatoes seemed like a gentle entry into the rewarding realm of vegetable gardening. A new co-worker, Kathy, and several others assured me that tomatoes are easy to grow in Sacramento. There’s nothing easier, someone said.

What with furnishing the house and settling into my job, it took a while to get around to my suburban farming adventure. Kathy and I became good buddies and, late one spring, she brought to work five tomato plants that she had grown from seed. Do you want to try these in your backyard? she asked. Why, of course, I said, thinking, There’s nothing easier.

I dug nicely circular holes and carefully planted Kathy’s little green gifts, none more than 5 inches tall. Recalling how, when I had received free trees from the Sacramento Tree Foundation, I had been instructed to fluff out the root balls to promote a quick and happily-ever-after marriage with the surrounding soil, I did the same for the tomato plants.

They got sun. They got shade. They even got fertilized. And, I still am proud to say, they got regularly watered.

And they grew. Watch out, Johnny Appleseed, John Deere or whoever, here I come!

Throughout the summer, my self-confidence soared as I watched those plants sprout all sorts of branches, buds and, eventually, tiny green tomatoes. It seemed there were dozens of homegrown tomatoes in my future. Probably I would become one of those people who brings bagfuls of them to work and encourages everyone to take as many as you can! I can’t keep up with my crop this year, as hard as I try. My tomatoes just keep maturing like crazy and it would be a shame to let them rot on the vine.

Once my little babies started turning pink, and a few of them were even red, I knelt down to pick some. Would I slice them up for a sandwich? Chop them up for a salad? Just gnaw on them right this second as though they were freshly picked apples? The possibilities were delicious and many.

Such rapturous reflections ended abruptly when upon close inspection I saw my babies had been infiltrated by bugs. Holy tomato! Suddenly, I lost my appetite and wondered what could have gone wrong or&emdash;dare I say it?&emdash;what Mr. Renaissance Man had done wrong.

The next day at work, I posed that question to someone other than Kathy. Starting a pattern that would continue for the next eight or nine years, I shrank from telling her about my failure. She had gone to the trouble of buying the materials, planting the seeds, coaxing the newborn plants up through the soil, labeling them and bringing them to me at work, sometimes with computer handouts that explained what the varieties would look and taste like. The least I could do was let her assume I was succeeding.

Who it was and precisely what was said are memories lost to me now, but I do vividly recall my face turning bright red (there’s irony for you) the day when Someone Other Than Kathy informed me that to grow tomatoes, one typically needs to stake the plants, or better yet put wire cages around them to support the weight of the fattening fruit. My biggest tomatoes, each now with more tunnels than under a German prisoner-of-war camp thanks to ravenous insects, all rested on the ground like . . . I don’t know, watermelons? I’m better at historical analogies than I am at agricultural ones.

As the years flew by, Kathy continued to bring me plants in the spring and I would go into tomato dunderhead mode from then until late fall, making obvious mistakes without seeming to gain much knowledge. To say I never had a bumper crop would be to imply I ever had a decent one, which is not the case. Until last year, the most tomatoes that had come out of my backyards (I was on my second Sacramento-area home by then) was maybe 10.

Kathy not only gave me a lot of chances to grow tomatoes, but a lot of varieties as well. Alas, rather than having a green thumb, I was all thumbs. Big Boys became big boo-boos. Heirlooms? Errors loom. Early Girls? Dead on arrival.

Last year was different in that two of the plants grew like weeds, deep into the fall. In fact, they completely overran the wire cages and spilled out onto the grass. If the growing season had continued indefinitely, I imagine those plants would have crept over to the garage and swallowed it. The tomatoes they contained, naturally, had shortcomings that I had seen all too many times over the years: They split just when they were starting to look edible, they stayed green and hard as rocks, they stayed on the vines too long and that, needless to say, made me feel rotten.

My wife’s gentleman-farmer uncle, upon hearing about the ever-expanding plants after I finally had to tear them out (which took a while because of their immense size), explained that some tomato plants are like that: They don’t all know when to stop growing.

But maybe I know when to stop trying to grow them. How much more failure should I be prepared to accept when the fact is, there’s nothing easier than buying tomatoes from a grocery store?