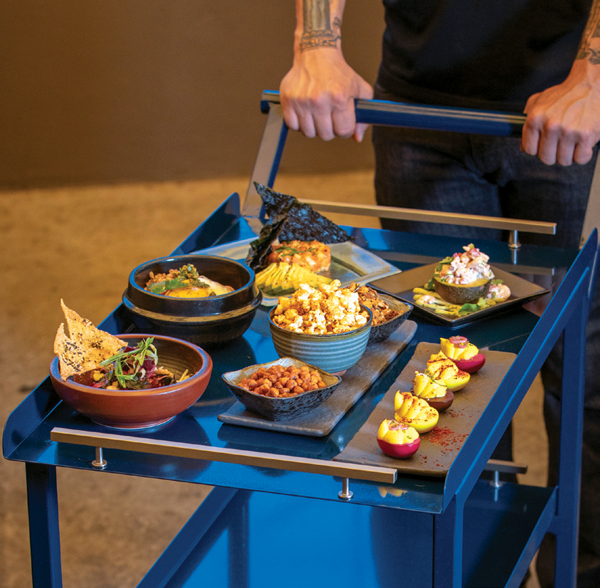 Tiger, the bar/restaurant that opened in November just steps from Golden 1 Center, is on a roll—literally. Many of the noshes on the eclectic menu arrive tableside on a dim sum-style cart, allowing diners to choose from a rotating selection of small plates with culinary origins that span the globe.

Upon each visit, the cart offers something a little different, from pickled deviled eggs to Thai fried peanuts to an avocado piled high with shrimp salad. The remainder of Tiger’s menu—most of it composed of small bites, many of them sharable—is made to order, including the addictive shishito peppers with bacon and miso and tender eggplant fries accompanied by a thick yogurt sauce.

Tiger’s concept originated with co-owner Sonny Mayugba, who “had strong and fond memories of going to dim sum as a kid,” according to executive chef Eric Sarmento. As the chef charged with executing it, Sarmento says the idea of American dim sum appealed to him immediately. “I love all the creative freedom I have to create these dishes.”

There’s a learning curve to ordering at Tiger—it’s tricky to select items from the menu when you don’t know what delights the cart might bring. But that sort of unpredictability is part of the appeal.

Bar manager Sean Wood, formerly of Amaro, B-Side and The Hideaway, was tasked with developing a beverage program focused on craft cocktails that could be delivered with speed and efficiency. “We are close to the arena, so the goal is to be able to create cocktails that are innovative but can be prepared quickly for people who are stopping by before a game or concert,” explains Sarmento. To that end, Tiger offers pre-batched cocktails that can be served up in a jiffy along with made-to-order drinks that show off the creative talent behind the bar.

The real star on the beverage menu, however, is the Tiger’s Milk, a frozen concoction made with crème de cacao, genever gin, Frangelico and coconut milk. The name is a nod to the Prohibition-era slang term for gin and the energy bar that shares the same name. Says Sarmento, “It’s a surprisingly delicious, boozy cocktail that is super fun for us to put together”—almost as much fun as drinking it.