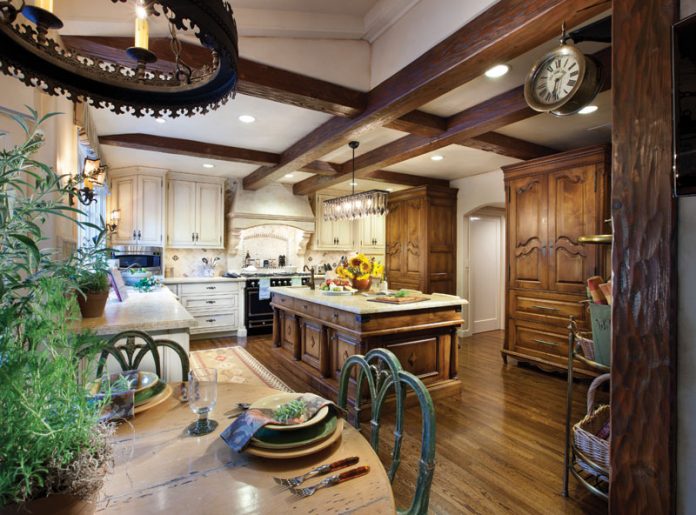 Before Alberta Nassi met Sacramento interior designer Katie Denham, she was in a bit of a quandary. Her plan to renovate the kitchen of her French Normandy-style home in Old Sierra Oaks had lost some steam, and she was starting to have doubts about the color of the granite she had chosen for the countertops. (Uh-oh.) “I came to Katie saying, ‘Help! We’re really trying to get this project going,’” Nassi remembers. So that’s precisely what Denham did.

Nassi and husband Steve Abramowitz’s home was built in 1929 by revered Sacramento craftsman Squeaky Williams, so blending the new kitchen into the home’s distinctive old-world style was imperative. But so was a fresh look. While the couple flirted with the idea of a nip-and-tuck remodel, with Denham and general contractor Dave Puente on board, they went for the complete package. “Dave was instrumental in this project,” Denham says. “We worked very closely together to figure out what we could do.”

French accents
Turns out, Nassi’s instincts about the granite were spot on. In the hands of the right designer, the stone worked like a charm. As does the whole kitchen. The refrigerator is enclosed in a beautifully rendered version of an antique French armoire. Ditto the pantry, outfitted with a clutter-busting storage unit any chef would adore. Bookending Nassi’s beloved CornuFé range are drawers that keep spices, pots and pans, dish towels and potholders close at hand but out of sight. Who knew you could put such a pretty face on so much function?

Denham, of Sacramento-based Katie Denham Interiors, recently redid the kitchen of her own vintage Curtis Park home, and she’s a practiced hand at breathing new life into ho-hum spaces. (Check out her blog at katie-d-i-d.blogspot.com.) In Nassi’s kitchen, she used shiny black fleur-de-lis tiles to dot a tumbled-limestone backsplash arranged in an eye-catching herringbone pattern. The kitchen’s color palette of mocha, amber, butter yellow and French vanilla serves up a rich, clean backdrop for accessories Nassi has collected in her pursuit of all things culinary: a chandelier ornamented with silver forks and spoons, a sturdy baker’s rack that once belonged to her mother-in-law and a pair of wrought-iron sconces she found in an East Sacramento antiques store. Master cabinetmaker Dave Puente of Puente Construction and Cabinet Makers in Rancho Cordova replicated beams for the ceiling and built the kitchen island, the stately armoires and the furniture-style inset face-frame cabinetry Denham designed. “People love it,” Denham says. “I like to use it whenever possible in a traditional kitchen because it adds so much character.”

Finishing  touches
Nassi, Denham and Puente all weighed in on finishes and glazes for the major wood pieces. “I don’t know how many mock-ups Dave did to get the right colors,” Denham says, “but he’s incredibly patient.”

Clearly at home in her kitchen made for cooking, Nassi turned out a batch of exquisitely gooey sticky buns the morning we visited, placing them on a plate atop the once-in-doubt granite of the kitchen island. “Oh, yes,” she says with a satisfied smile. “It’s a pretty kitchen that is also functional. It’s become a favorite place in the house.”