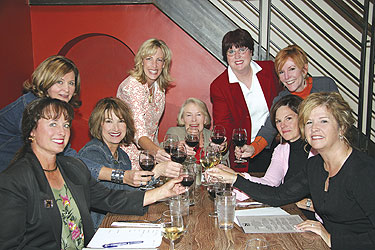 Best dishes: Grilled miso-glazed sea bass took high marks for presentation-in fact, each plate had that all-important eye appeal-and for its subtle, refined but assertive flavors. Next was the Korean barbecue beef ribs, more beef than ribs, with a sauce that was well-balanced and well-seasoned. The roasted-corn medley added yet another flavor and texture. Diners could order small plates from the Asian tapas list and be happy, especially the spicy ahi tuna tartare served in crunchy sesame cones. Top dessert: pear Charlotte, which slid down nice and easy.

Whoops: One luncher after another noted that the paper napkins did not do the job. This is an upscale restaurant with prices to match, and cloth napkins should be part of the package.

Chatter: Buccola was willing to bet that she had the most unusual item in her purse: a Funky Chicken CD. Why? For a school project: After lunch, she was on her way to pick up feathers to glue to T-shirts for the sixth-graders at her child’s school. (Mothers will do anything.) Buccola said that what happens with the Dining Divas should stay with the Dining Divas (sort of), but who could resist spilling her beans? Dreyer, a mother of four, has a musical talent: She’s an accordionist. The “I’ll eat anything” attorney said you haven’t lived until you’ve heard a zillion accordionists playing “Lady of Spain.” Awesome. Fashion note: Jean jackets, a pair.

*The Dining Divas-Gloria Glyer, Paulette Bruce-Miller, Bernice Hagen, Joan Leineke, Gayla Mace and Peg Tomlinson-Poswall-have been wining and dining together since 1993. Each month, they lunch at an area restaurant, taking as their guests people who placed winning bids at charity events. To date, they have raised more than $200,000 for local charities and nonprofits.

*For the rest of this article, pick up a copy of Sacramento Magazine’s January issue.