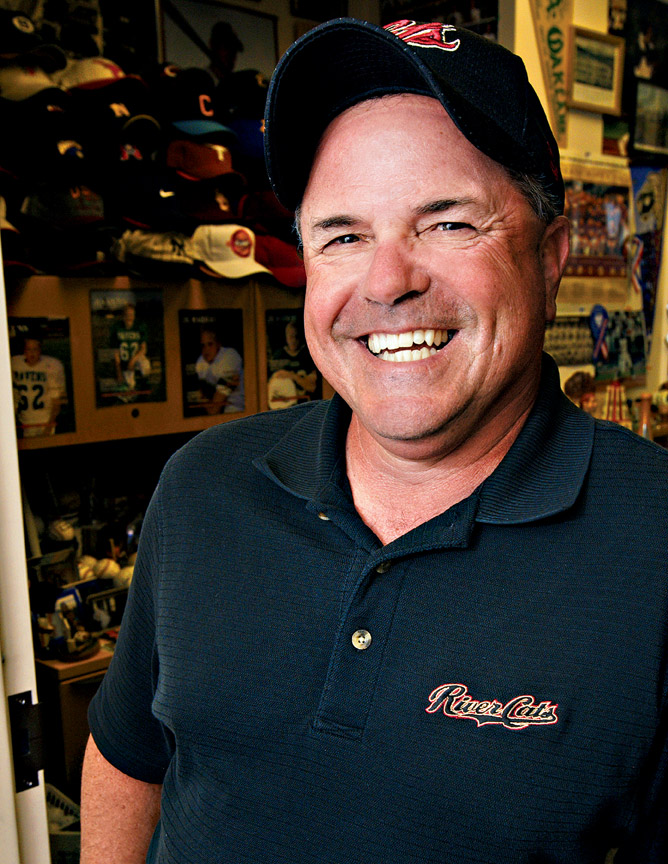 This baseball enthusiast and Sacramento River Cats educator shows how, with a little drive, anyone can hit a home run&emdash;on or off the field.

Back in the 1960s, this Carmichael resident dreamed of playing in the major leagues. Instead, fame found his high school teammate, Dusty Baker.

It took him close to 40 years, but Asaro, 58, finally broke into the world of professional baseball. As senior director of community relations for the Sacramento River Cats, he oversees educational programs that get kids out onto the playing field&emdash;not just to learn about the game of baseball, but the game of life.

It’s easy to woo kids with the excitement of sports, Asaro says. We want them to understand that they have the power to do what Jackie Robinson did.

Just what Robinson did is part of Asaro’s weekly talks through Home Run Tours, a program that brings nearly 5,000 students from area Kâ€“12 schools to Raley Field. On each tour, Asaro spends more than two hours giving lessons in math, science, history and life using fun facts and figures from baseball. The children are asked to add up numbers from famous players’ uniforms&emdash;numbers that Asaro can rattle off like a seasoned sports announcer&emdash;to arrive at a sum such as 42, Robinson’s number when he played for the Brooklyn Dodgers. What follows is nothing short of inspirational: Asaro discusses Robinson’s contributions to history&emdash;social, political and athletic&emdash;as America’s first African-American major league player and first African-American Hall of Fame inductee.

Asaro’s own contributions to baseball began while attending La Sierra High School in Carmichael. A second baseman, he dreamed of playing in the big leagues, but it was his teammate, Dusty Baker, who eventually made it. We lived through Dusty, Asaro says. His successes were our successes. While Baker played for and then managed major league teams, Asaro insists he’s not envious. I didn’t have a 100 mph fastball, he says with an easy grin. I would have never made it to the major leagues.

Not going for the gold didn’t keep him away from the diamond, however. After playing baseball in high school and at Sacramento State, where he majored in political science and philosophy, Asaro returned to La Sierra to coach the very team that had given him his start. High school is a highly emotional time, he says, squinting his azure eyes. [La Sierra] was home for me. It was incredible to be able to go back and work with the people I had known as teachers and now know them as staff members.

Asaro’s gifts as a coach and educator soon led to a stint as the community schools director at La Sierra, a job that kept him busy running after-school programs, managing relationships with feeder schools, anything outside the everyday classroom, Asaro says. But with his own expanding team at home&emdash;he and wife Nanci have four kids ages 14 to 31&emdash;it was time for a career change. When a friend offered him a job running a paint store, Asaro accepted. It’s not what I was passionate about, but that’s what put food on the table, he says. Twenty years later, Asaro had taken over the paint store and developed a talent that had nothing to do with baseball: an uncanny ability to match colors. But he never gave up on his passion for the pitch.

Which is why, when he was offered the job of senior director of community relations for the Oakland A’s Triple-A affiliate in 2000, it was nothing short of a grand slam. To be hired at 50 with no baseball background per se, even though I loved it&emdash;that’s amazing, Asaro says. They took a chance.

The chance paid off. Asaro is currently responsible for more than eight River Cats programs&emdash;including Home Run Tours, Triple-A Assemblies and the High School Baseball Program&emdash;with an events calendar that rivals a socialite’s.

The Triple-A Assemblies alone reach 161,000 students per year from schools as far-flung as Colusa and Lodi. In more than 150 annual assemblies, Asaro teaches the kids what Triple-A truly means. We say it stands for attitude, attendance and academics, he says, the basic building blocks for what you do in life.

You don’t have to be the best, but you’ve got to be there. You’ve got to be Cal Ripken Jr., asserts Asaro, referring to the former Baltimore Oriole and recent Hall of Fame inductee. He never missed a day in 16 years. If you’re there, everything falls into place.

Asaro also runs the High School Baseball Program, which gives student-athletes the chance to play on Raley Field by selling tickets to a River Cats game. But this isn’t just a clever revenue-generating ploy for the minor league team: A large percentage of the proceeds from ticket sales go directly back to the schools, totaling nearly $80,000 per year.

Then there’s the Parade of Leagues that Asaro marshals: a 25-minute ceremony in which local youth baseball and softball teams traipse across the field before a River Cats game to stadium cheers. The Field of Dreams gets kids even closer to the action, when 27 children are chosen to run out onto the field with River Cats players to salute the national anthem before a game begins. I can’t begin to express to someone how powerful that is for that 8- or 9-year-old, Asaro says. It’s simple, but the impact is huge.

Asaro knows something about the impact baseball can have. The journey from student-athlete to coach to paint store proprietor to educator with the Sacramento River Cats has left quite an impression on him. I never dreamed I’d work in baseball, he says, kneading the bill of his River Cats cap. To go from whatever â€˜normal’ is to this&emdash;I couldn’t have written a better book.