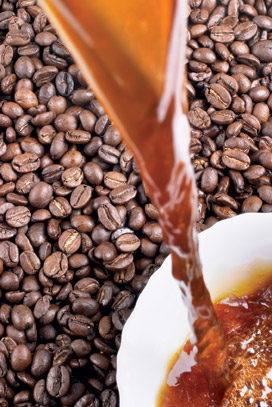 As a card-carrying member of the Maxwell House generation, my mother used to poke fun at the “yuppies” who trolled into Starbucks for their daily double tall nonfat no-whip extra-foam mochas. “Whatever happened to just a cup of black coffee?” she asked. I would meekly point her in the direction of the Americano (espresso plus water), and that would be that.

I was ashamed to confess that I, too, was sipping newfangled coffee concoctions (in my case, the Venti latte) on the sly. Easy access was to blame. After all, I was working in Manhattan, where I walked past countless coffeehouses during my daily sashay from Grand Central Station to my office on 32nd Street. Bleary-eyed from the train ride, I needed a big blast of caffeine. Somehow, the ever-present pot of Chock full o’Nuts in the company kitchen didn’t have the same cachet as a luscious latte from a cool cafe.

The company coffee had one thing going for it: It was free. But I never thought of that while shelling out upwards of $3 for my daily grind. These days, I work at home and am no longer faced with that temptation. But when a friend recently mentioned her daily struggle to ignore the siren’s call of the Starbucks across the street from her office, I decided it was time for a Dollar-Wise investigation.

Just how much should the money-minded be worrying about this seemingly small indulgence? And how much does the price of a cup o’ joe vary from coffeehouse to coffeehouse?

The price difference was underwhelming. You’ll save a few pennies at Java City, where the soy latte was $2.96 as compared to $3.05 at Starbucks and $3.25 at Peet’s and Tupelo.

Just how does it all add up? Well, averaging those four figures, it’s close to $3.13 per drink. If you indulge daily Monday through Friday, you’ll spend $15.65 per week, which totals $813.80 a year. And that’s not counting the scone, muffin or slab of cake you might add to your take.

I guess the Suze Ormans of the world would say that’s cause to, as one friend put it, go on a Starbucks diet. And in all good Dollar-Wise conscience, I guess I’m supposed to tell you the same thing.

But you could also look at it this way: Caffeine is known for its productivity-producing properties. The more productive we are, the greater we’ll prosper. And if we prosper, we’ll have so much money that we can drink as many lattes as we like, all the way to the bank.

That’s what I used to tell Mom, anyway. She never quite fell for it, though she eventually switched from Maxwell House to Peet’s, suggesting even she understood the importance of a good cup of coffee—no matter the cost.