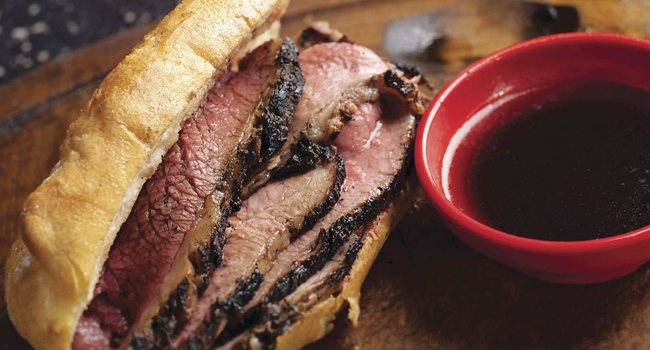 If your holiday shopping spree includes a romp through Roseville’s biggest shopping mall, Westfield Galleria, you’ll have no problem finding places to refuel. This high-end mall offers everything from sit-down meals at upscale restaurants (Il Fornaio, anyone?) to grab-and-go pretzels at Auntie Anne’s. For this month’s column, though, I went straight to the center of the action: the food court. It’s an especially nice one, with some 15 eateries and virtually every kind of cuisine, from Greek to Thai. While steering clear of McDonald’s, Rubio’s and Panda Express (we figured you already know about those), The Boyfriend and I sampled something at nearly every other venue, with one caveat: The price ceiling was $8. This immediately ruled out several eateries, including the Mongolian barbecue place, where noodle bowls start at $8.65, and Aria Kabob Cuisine, where prices are $8.99 and up. Here’s what we liked best.

At Buckhorn Grill, two items—both $7.99—rocked our world. The Roadhouse, a salty-sweet sensation of a salad, creatively combines crispy fried onions, crumbled blue cheese and lightly glazed walnuts on a mountain of mixed greens and tomatoes, tossed with honey basil vinaigrette. But if you’re ready for some beef, go for the Little Buck sandwich, a sweet French roll filled with a generous pile of thinly sliced char-roasted tri-trip. Jus is served on the side; caramelized onions are optional.

Dazzlingly delicious and only $6.99, the gyros at Milo’s Grill were possibly our favorite find. There are six varieties, including chicken, steak and a spicy one made with Sriracha sauce, but we went with the classic. A fat, fluffy pita packed with thickly sliced gyro meat (a mix of lamb and beef) and slathered with garlicky tzatziki, plus the usual produce (lettuce, tomato, onion), it was as filling as it was flavorful—a winner all the way.

Ruby Thai Kitchen also offers an excellent bargain with the $6.29 combo: one entree plus rice or pad mein. We tried the basil chicken, super-tender chunks of chicken in a savory sauce, served with a sea of skinny pad mein noodles. The portions were so generous, we split it for dinner.

At just $4.89, the mini-plate at Hibachi-San Japanese Grill is a steal. It was advertised as “one side, one entree,” but there was an unexpected addition: vegetables. We tried the teriyaki-lime chicken, bathed in a mildly sweet sauce, with fried rice and crispy veggies—a pretty potpourri of broccoli, carrots, cabbage and zucchini. Tasty food + plentiful portions = big thumbs up.

Though it’s perhaps not the best bang for your buck, the mahi fish taco ($4.95) at Gordon Biersch Tavern was a hit. With a nice hunk of fish, pepper jack cheese, pico de gallo, spicy remoulade and lettuce, wrapped in a double tortilla (crisp blue corn and soft flour), it had a certain culinary panache.

OK, so it doesn’t quite constitute as a meal. But for husbands who protest loudly when dragged to the mall (yes, The Boyfriend qualifies), a 16-ounce craft brew on tap, only $3.50 at Milo’s Grill, instantly takes the edge off. Another Anchor Steam, please?