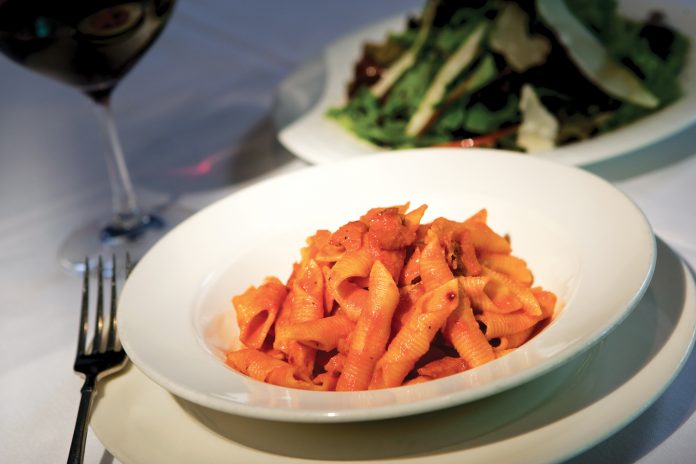 Prix fixe—French for “fixed price”(and pronounced pree feeks, in case you care)—is a
common sight on dinner menus. At lunch? Not so much.

But that, happily, may be changing.

I recently spotted three of the area’s loveliest restaurants—Biba, McCormick & Schmick’s and Spataro—offering sweet noontime deals. So of course I had to take each out for a test drive. Here’s the scoop.

At Biba, gal pal Vanessa and I felt (for a few hours, anyway) like members of Sacramento high society. This is one high-class place, complete with the white-linen treatment and charming Italian servers. (Ours: Carlo.) The two-course prezzo fisso menu, offered Tuesday through Friday, features a choice of two entrées, plus a soup or salad starter. We tried both items: a pasta dish (Vanessa’s choice) and seafood cakes (mine). While both were excellent, it was the pasta—garganelli in a killer tomato-pancetta-vodka sauce—that showed, in a heartbeat, why Biba is Biba. My soup (an herby, thick tomato) and Vanessa’s mixed green salad also were very tasty. Portions were surprisingly generous, and they don’t skimp on the bread, either. Molto bene! Price: $15.

A clever “Ten for Ten” (yup, 10 items for $10) lunch is in McCormick & Schmick’s bag of tricks. The big surprise? It’s not all about seafood. When I visited, only two of the 10 items featured fishy fare; otherwise it was sandwiches, salads, pastas and, of course, its “famous” cheeseburger. (You can’t go wrong with one of those.) My chicken Parmesan, pan-fried with fire-roasted tomato sauce and served atop linguine, was both scrumptious and sensational in size, with two huge slices of chicken—enough for two meals. Lunch pal Lisa loved her Spicy Cashew Shrimp, though she found it more tangy than spicy. Snow peas also were in the mix and some wonderful sticky white rice. All was elegantly plated and served, and the warm sourdough that started the meal was divine. We walked away saying, “We’ll be back.” (We were at the Roseville location, by the way.) Served daily. Price (in case it needs repeating): $10.

Spataro can do no wrong, as far as I’m concerned. It’s elegant yet friendly and big-city hip, and the food is consistently a cut above. Spataro’s fixed-price lunch (Monday through Friday) is a little different in that there’s only one item featured daily—i.e., no choices—but who cares when they’re serving up delectable things such as skirt steak with arugula and crispy fried onions, pasta with mussels and the like? I tried the cannelloni: two delicate crêpes filled with chicken, spinach and fontina, served in a pool of robust red sauce and bathed with beautiful béchamel. It’s as mouthwatering as it sounds, and filling: I took one of the crêpes home. A large pile of leafy greens opens the meal, and the very fresh homemade bread is served with olive oil and balsamic for dipping. Price: $10.

Let’s hope more local restaurants get the hint and start offering prix fixe at meal times other than dinner. Breakfast, anyone?