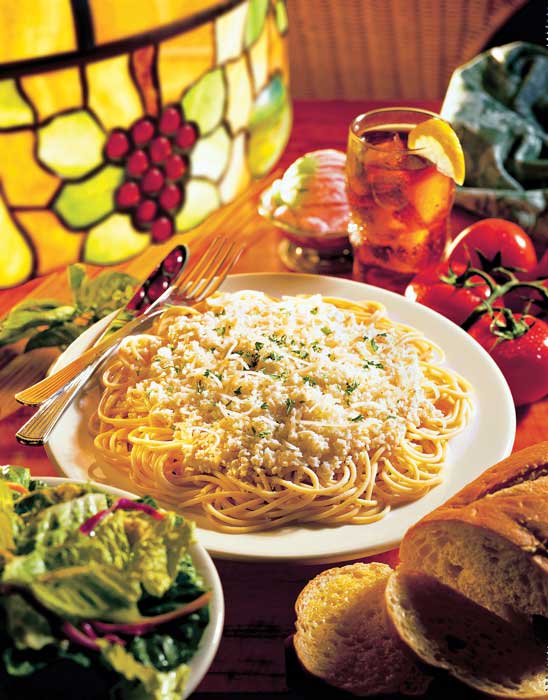 Love it or loathe it, one thing is certain about The Old Spaghetti Factory: A better deal for your dining dollar would be hard to find.
This old warhorse, a Sacramento institution since the midtown location opened in 1978, offers a plentiful plate of pasta (spaghetti or angel hair, with whole wheat and gluten-free options, and choice of sauce) as part of a complete dinner—beverage, bread, salad or soup, and spumoni for dessert—for less than $10. The cheapest option, pasta with marinara sauce, is a mere $7.99.
So much for the good news. The bad news is, with prices this low, The Old Spaghetti Factory (part of a national chain) is a magnet during these troubled economic times—great for business, but perhaps not so great for customers. When my editor asked me to visit the midtown branch on a recent Saturday night, I immediately envisioned the worst: an interminable wait in a packed lobby, rushed service and bland, possibly cold food. The sound of screaming, hungry children would serve as background music. My spumoni would arrive melted.
With aspirin, notepad and gal pal in tow, I set out on my mission. The upshot?
A pleasant surprise. But like any other game, you gotta know how to play. Here’s what I learned.

Call ahead—True, the restaurant takes reservations only for parties of six or more. But did you know it offers call-ahead seating for smaller groups? Dial after 5 p.m., up to one hour before your arrival, and your name will be added to the waiting list. We tried it and, upon arrival, whooshed right in, feeling only mildly guilty as we breezed past 30 or so customers waiting outside.

Beware of the bread—When that piping-hot mini loaf of freshly baked sourdough arrives at your table, you’ll want to inhale the whole thing. Don’t. I gobbled two fat slices slathered with garlic butter, and while I enjoyed every mouthful, it ultimately led to a food coma (and a doggie bag).

Stick to the soup—While some of the salad dressings are tasty—people especially rave about the creamy pesto—the iceberg lettuce, while fresh, didn’t do much to elevate the experience. The soup—a thick, herby minestrone—is a better bet.

Avoid the marinara—While it wins points for being the best deal on the menu, I found the marinara watery and lacking in flavor. The mizithra cheese and browned butter ($9.99), however, was rich and flavorful, as was the creamy white clam sauce ($9.50). My companion was happy with the rich meat sauce ($9.99). For the undecided, there’s the potpourri with four sauces or the manager’s favorite with two (both $9.99).

If you can’t imagine spaghetti without wine, The Old Spaghetti Factory has some house specials for less than $5 a glass. My Trinity Oaks Pinot Noir ($4.95) wasn’t half bad, though I wouldn’t recommend it as an accompaniment for the spumoni—which, by the way, arrived intact.

Grand total: For two complete pasta dinners, only $19.98. Of course, that’s not counting wine, tax or tip. But where else can you get a three-course dinner for two for less than $20?