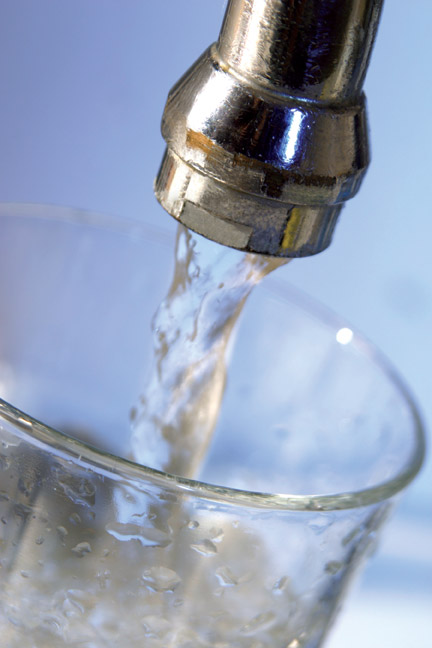 Now that it’s January and you’re trying to drop the 10 pounds you packed on over the holidays, it might be prudent (though not terribly fun) to skip the wine and stick to water. Although Pinot Noir is endlessly more enticing than Poland Spring, this one simple step may help to move the scale in a downward direction&emdash;and even if it doesn’t, you’ll at least save some money. Right?

I hesitate because this water thing has gotten completely out of control. Remember the good old days, when ice water appeared automatically the minute you sat your fanny down in a restaurant? It’s a great old tradition, still practiced in many places. And the best part is, it’s free.

But walk into a fine restaurant today and you may find yourself nose to nose with a waiter who asks, Still or sparkling water? Those four little words can have the paralyzing effect of a stun gun, rendering you incapable of muttering the words Tap water, please.

And that, my friends, is where Dollar-Wise danger lurks. While it seems innocuous enough, bottled water is one of those sneaky hidden costs that creep up to bite you in the you-know-what.

Maybe Sacramento hasn’t gone quite as kooky over bottled water as New York, where The Ritz-Carlton employs a water sommelier to advise customers on food-and-water pairings. (Yes, really.) But you easily can find yourself paying $4 for a bottle of Pellegrino (the sparkling stuff) or Panna (still spring water from Italy) in a local restaurant. And that adds up.

Granted, it isn’t always easy to stick to your guns. When you’re under the heat of a waiter’s glare, it’s often easier to acquiesce than to be assertive. Besides, who among us wouldn’t rather sip Tuscan water from the cradle of civilization (as Panna is promoted) than from the lowly tap?

But with recent reports revealing that some bottled water is just tap dressed up in a pretty package&emdash;with a price tag to match&emdash;you have one more reason not to cave in.

Some locals already are getting hip to the jive. At the Town Lounge in Roseville, executive chef Roderick Williams reports that probably 90 percent of his customers request tap water. And it’s not just because of the consumer cost, he says: Some are concerned about the environmental toll exacted by bottled water. (Most glass bottles are thrown away, and plastic ones largely end up in landfills.)

But The Dollar-Wise Gourmet is not here to preach about what’s environmentally correct or incorrect. What I do know is this: You’ll shave dollars off your restaurant tab if you say no to the bottle and yes to the tap&emdash;and that, after all, is the point of this column.