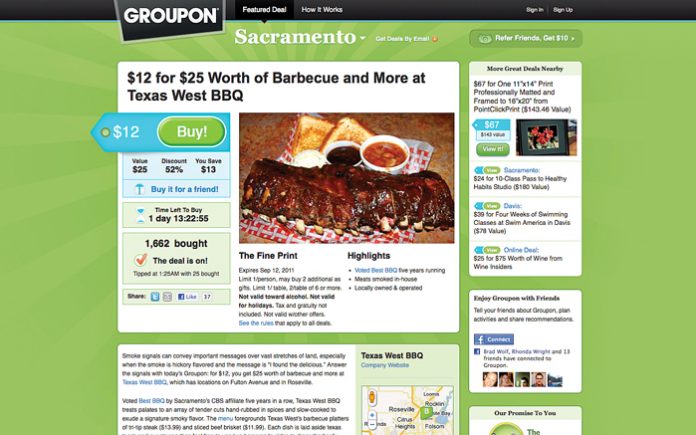 Dollar-Wise drumroll, please: For bargain-seeking eater-outers, this Groupon thing rocks. It’s also, apparently, a big hit with restaurateurs. (We’ll get to that in a minute.) But first, the lowdown for my Dollar-Wise buds.
I’d first heard about Groupon—a Chicago-based shopping website offering daily deals in major cities across the United States and Canada—on the “Today” show, and I eagerly awaited its arrival in Sacramento, which finally happened last spring. But for months, there didn’t seem to be much activity in the foodie world. The deals were mostly for car washes, spa treatments and such. (Groupon offers discounts to all kinds of services.)
Recently, however, my e-alerts (you get them free by signing up) were awash in restaurant deals—everything from Willie’s Burgers to Ma Jong’s Asian Diner to Sweetwater Restaurant and Bar. It was time to get my Groupon on.
The deal I jumped on: $15 for $30 worth of food and drink at Pyramid Alehouse on K Street, an old favorite for its tasty handcrafted brews and surprisingly good food. Getting the Groupon is easy: You simply pay online, print it out and bam—you’re set. But do read the fine print: I mistakenly assumed “daily deal” meant it was good that day, but it couldn’t be used until the following day. It also required making a reservation and mentioning the Groupon.
Yet all of this was easy and, as it turned out, that $15 investment went a long way. The Boyfriend and I enjoyed two hearty entrées—beer-braised sausages, mashed potatoes, caramelized onions and sauerkraut for me ($12), a salmon BLT with fries for him ($10)—plus two pints of Thunderhead IPA ($3.50 each). Without the Groupon, we would have paid $29 for this very satisfying meal; with it, only $15. Sweet. Plus, the waiter actually seemed happy to see our Groupon sitting on the edge of the table. “Oh, great, you’ve got a Groupon!” said he. There was none of the dreaded “oh no, you’re one of those coupon-clipping people” ’tude.
When asked whether the restaurant was seeing a lot of Groupon activity, our amiable waiter nodded enthusiastically and said, “Yes! It’s been fantastic!”
He’s not alone in his zeal. The two restaurateurs I called—Robert Masullo of Masullo Pizza and Jeffrey Johnson, co-owner of Sandra Dee’s Bar-B-Q & Seafood—both said they were happy with the service. And why not? For both, it generated beaucoup business.
“The first few days [after advertising on Groupon] were massive,” says Masullo. “We got new customers we’d never reached before.” Total Groupons sold: about 1,200, says Masullo. Some days, the Grouponers practically took up the entire restaurant. “The first few days we were getting 20 to 28 people redeeming them, and we have only 30 seats.”
“It creates a buzz—it’s marketing,” adds Sandra Dee’s Johnson. “I’d do it again.”
Me, too.
Want more information? Go to groupon.com.