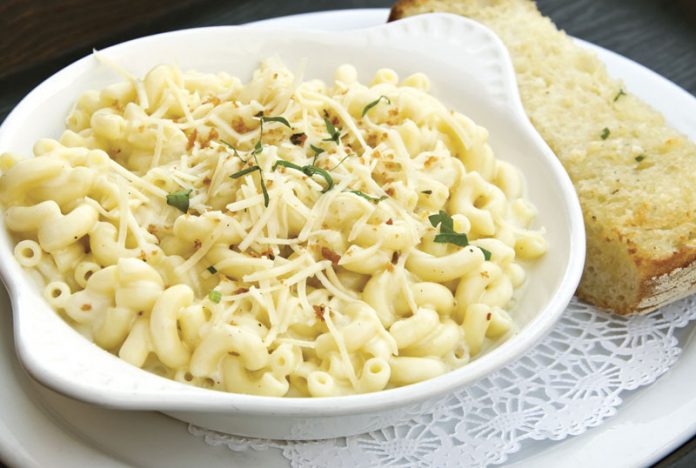 Comfort food soothes the soul, warms the tummy, lifts the spirit—and also is some of the cheapest food on the planet, making it the perfect choice for these economically not-so-comforting times.

Whether it’s macaroni and cheese, biscuits and gravy or cream of potato soup, the common denominator in most comfort food is carbs—and carbs cut costs. (Calories? Not so much.)

Around town, you can find plenty of comfort foods for under $10, even under $8. But if you’ve only got five bucks in your pocket, the pickings are pretty slim. So that became this month’s Dollar-Wise mission: to find tasty, satisfying fare for $5 or less. Here are my five faves:

Avgolemono at Greek Village Inn: $4.95. Nothing says comfort like memories of Grandma’s cooking—and in my house, Grandma was Greek, spawning a lifetime love affair with avgolemono (egg-lemon-rice) soup. This one doesn’t pack quite the lemony tartness that my grandma’s did, offering instead a delightfully delicate citrus undertone in a creamy, heavenly broth. Warm pita triangles, perfect for dunking, come on the side. 65 University Ave., Sacramento; (916) 922-6334

Macaroni & Four Cheese at Pronto: $3.75. Finding a palate-pleasing mac and cheese wasn’t as easy as you might think; Pronto was my third stop. But it was worth the effort. With its rich blend of four cheeses (fontina, white cheddar, Parmesan and Asiago), crunchy browned breadcrumbs and parsley, it’s as pretty to look at as it is sinful to eat. And it’s served with a big hunk of sourdough garlic bread. 1501 16th St., Sacramento; (916) 444-5850; prontogo.com

Oatmeal at Cafe Bernardo: $4. What could be more wholesome and hearty than oatmeal, especially one that’s housemade, like Bernardo’s? It arrives steaming hot in a good-size bowl, topped with sliced bananas, a sprinkling of toasted pecans and a dollop of brown sugar. 2726 Capitol Ave., Sacramento; (916) 443-1180; paragarys.com

Slice of pizza at Luigi’s Slice: $4.45. Yes, there are cheaper slices to be had. But for my money, nothing beats a slice from Luigi’s, whose fabulously crisp crust and superfresh toppings make it a mouthwatering winner. (Besides, it’s so humungous that it’s really two slices in one.) I had the special—sausage, pepperoni and black olive—but if you want to pinch a few more pennies, go for plain cheese ($3.95). MARRS building, 1050 20th St., Suite 150, Sacramento; (916) 447-1255

Turkey à la king at Plaza Hof Brau: $4.59. Comfort food is all about tradition, and you can’t get much more traditional than this hofbrau, which has been around since 1959 and hasn’t changed much since. They’re still serving up hefty portions of classic American fare at dirt-cheap prices, and the turkey à la king is one of the best bargains: thick and creamy, with tender turkey chunks, onions, mushrooms, celery and bell pepper, and a fluffy buttermilk biscuit plunked on top. 2500 Watt Ave., Sacramento; (916) 482-2175