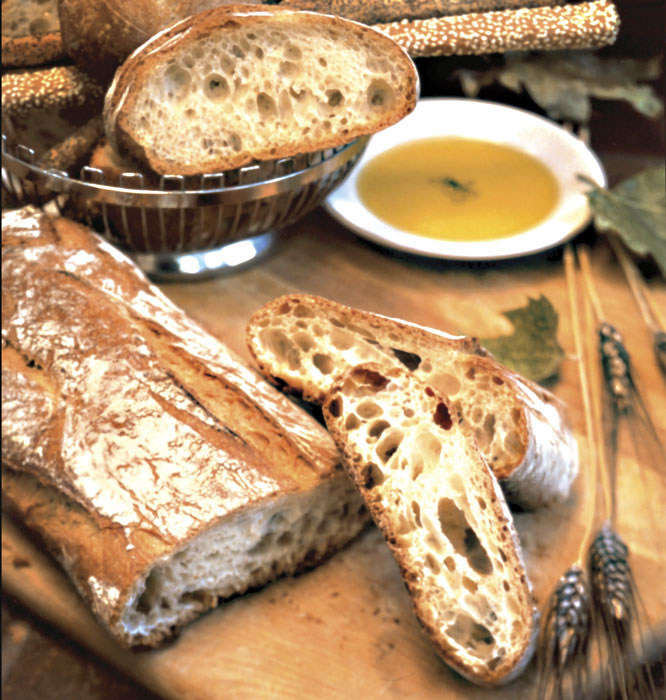 In these tough economic times, diners can feel downright resentful about added charges, such as split-plate and cakeage fees. (Yup, restaurants charge if you bring in a special-occasion cake, usually $2 a head.) Now there’s another item to add to the list: bread.
From New York to Las Vegas, journalists and citizen bloggers have been writing about the growing trend of restaurants charging for bread, and opinions are mixed. Some claim that the practice is a sneaky way to make money and that it strips hospitality from the meal. Others, including New York Times restaurant critic Frank Bruni, argue that many diners don’t partake much from the bread basket anyway, and that it’s not as free as it looks: Bread and butter (or olive oil) are actually figured into the price of the meal.
As a bread fanatic, I’ll confess that I frequent certain restaurants where bread plays a starring role. A favorite is Il Fornaio, where a sensational spread of complimentary bread, along with oil and vinegar for dipping, is served straightaway, right along with the water (also free). It’s a gracious, warm and welcoming way to start the meal.
Still, I’ve never felt ripped off when buying an order of bread at Cafe Bernardo, where it’s 75 cents for a quarter-loaf of Paragary’s Bakery Bread. And why should I? Most of Bernardo’s entrées cost less than $10, so another three quarters is not going to break my budget.
With restaurants struggling to stay afloat in this recession, it wouldn’t surprise me to see more of them charging for bread. And bad economy or no, the waste argument is a strong one. When you think of all the untouched bread that gets tossed into restaurant waste bins night after night, it puts a whole new spin on the meaning of carbo loading, and not in a good way.
But no matter where you stand on this issue, one thing’s for sure: To avoid unhappy surprises when the bill comes, look before you leap. At some restaurants, such as Il Forno Classico in Gold River—known for its fabulous free focaccia—the menu states there’s a $3 charge for additional bread, though a restaurant rep says the policy isn’t always followed to a T. Still, scan the menu or ask your server about possible add-on fees.
The New York Post recently quoted Zagat guidebook guru Tim Zagat as saying that charging for things that are usually free (such as bread and butter) in recessionary times “could be ultimately suicidal” for restaurateurs. But personally, I think there are greater sins, such as finding out that a restaurant doesn’t even serve bread. Or what if we suddenly had to pay extra for soy sauce at an Asian restaurant, or ketchup at a burger joint?
With any luck, those won’t be the next trends. But if they are, you didn’t hear it from me.