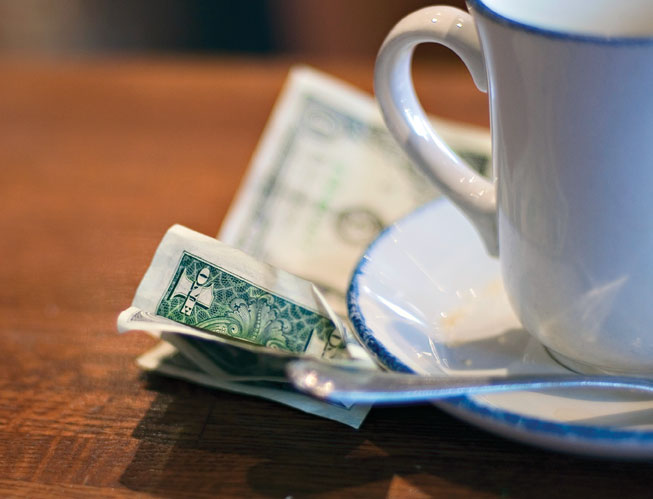 Recently overheard at a midtown restaurant:

He: “You’re leaving how much?”

She: “Well, I don’t see why you’re worrying about it—I’m the one who’s paying.”

He: “But they took forever to bring our check!”

Squabbles over tipping probably have been going on since the first penny was minted. But with the economy in a slump, I wondered: Are customers getting tighter when it comes to tips?

According to the California Restaurant Association, the answer is “no.”

But Kellie Oliver, a veteran server and bartender/manager at Sacramento Brewing Co. in Town & Country Village, begs to differ.

“People are absolutely chintzing more on tips,” she says. “A lot of people are tipping a little lower, being a little less generous.”

Instead of rounding up, Oliver says, people are rounding down. “I’m getting more 10 to 15 percent tips, or right down to the penny.”

So just what, exactly, is a “good” tip? Is 20 percent the new 15 percent? Or has the recession changed all that?

According to the CRA, the industry standard on tipping in California is generally 15 to 20 percent of the tab as a means of recognizing “good to superior service.” Which suggests that anything below 15 percent is, well, cheap.

Local servers generally agree on that rule of thumb. They also agree that you should base your tip on the after-tax total—not pre-tax.

Anything above 20 percent, Oliver says, is “icing on the cake.” She used to get her fair share of icing. But not lately.

Then there are the horror stories. Seems like every server’s got one.

At a local French eatery, one patron was so appalled to learn french fries weren’t on the menu that he left a paltry 35-cent tip.

“He asked me, ‘How can you be a French restaurant and not serve french fries?” recalls the server, who prefers to remain anonymous. The customer stayed for dinner anyway, racking up a bill in the ballpark of $17.50, says the server.

“If I had seen him leave, I might have said, ‘Sir, it is unfair for you to penalize me for something I have no control of.’ But I didn’t see him leave.”

Servers don’t have control over the economy, either, which is something you might want to consider as you calculate your next tip. While it’s true this column is about saving money—something more pertinent right now, sadly, than in flusher days of yore—maybe it’s time to skip the $8 cosmo and shovel that cash toward your hard-working server, who may be having an even tougher time making ends meet than you.

Pay it forward—now there’s a concept for The Dollar-Wise Gourmet.