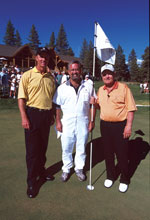 The man many believe to be the greatest golfer of all time came to Truckee several times the last few years to design the new Jack Nicklaus Signature course at Old Greenwood in Truckee. He and son Jack Jr. oversaw the project and played the inaugural round before a crowd of several hundred people when it opened. A veteran Northern California Golf Guide writer was selected to carry the bags for Jack Jr. as he and his dad worked their magic over 18 holes. Here is the report.

Jack Nicklaus had just hit a long birdie putt on the ninth hole at Old Greenwood, the latest of his architectural marvels. The ball followed its master’s instructions perfectly, heading straight for the hole.

But as the putt snaked its way down one slope and up another, a previously anonymous caddie suddenly became the focus of attention. The poor sap in the white jumpsuit couldn’t pry the flagstick loose from the cup. He yanked once, twice, three times, each to no avail.

The 500 or so spectators encircling the green watched anxiously, asking themselves: Where’d they find this guy? On one of those roadside work crews?

Jack Nicklaus II, the oldest son who caddied for his father’s sixth Masters triumph in 1986, rushed in for the rescue. Jackie nudged the caddie aside and gave the pole a quick twist, extricating the stick just as the putt slid an inch or two by the hole. Nicklaus then told a story of how he once lost a tournament in a playoff after his caddie, bleary-eyed after a long night on the Las Vegas strip, pulled the flagstick out of the hole just as the ball arrived. The stick not only knocked the ball away from the hole; Nicklaus received a two-stroke penalty to boot.

But at Old Greenwood, a Nicklaus-designed course in Truckee, the looper in question couldn’t blame his screw-up on being looped the night before. I had no such excuse. I’ve tended thousands of flags in my time. But when it came time to hold the stick for the greatest golfer in history, I’d have been better off three sheets to the wind.

When the ceremonial round was completed and he was saying a few words to the crowd, Nicklaus graciously thanked me and the other caddie-for-a-day, Brian Murphy, adding, “I wouldn’t quit your day jobs, fellows.”

A typical workday for the greatest golfer in history is now more likely to be spent inspecting blueprints than birdie putts. At 66, Nicklaus seldom plays competitively anymore, but his company, Jack Nicklaus Design, is busier than ever. With a design team that includes sons Jackie, Steve and Gary, the Golden Bear’s paw print can be found on courses spread across 36 states and 27 countries. Nicklaus Design opened 14 courses in 2004 alone. In the Northern California Golf Guide region, Nicklaus’ courses include Ruby Hill in Pleasanton, Coyote Creek in San Jose, Diablo Grande’s Legends West in Patterson, Mayacama in Santa Rosa, Pasadera in Monterey, Montreux in Reno and Pronghorn in Bend, Ore.