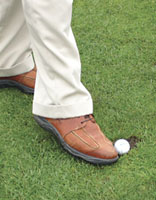 I admit it—on occasion I have used the “foot wedge” to improve the lie of my golf ball. (My friend Mr. Murphy calls the shot a “Lou Groza” in honor of the skilled Cleveland Browns kicker.) I’ve also ignored the sound of the ball hitting my club shaft as it comes out of a bunker. (This also counts for another stroke.) Although I have sometimes ignored shots such as these, if only to soothe my temper or boost my golf-battered ego, I wouldn’t omit any stroke if posting a score, playing in a match or tournament, or for any dough. God knows what I’d do for a lower handicap, but cheating in golf is untenable. It violates the game and the player.

In April 2005, something miraculous—some would erroneously say impossible—happened on the 15th hole of a small golf course on the outskirts of Sacramento. (Please see Tim Comstock’s insightful feature called Proving a Miracle.) After the first golfer in the foursome missed the green, the other three players hit consecutive holes in one. Bing. Bang. Bam.

Holes in one are regular occurrences, reported on the newspaper sports pages each week. Much rarer is one person hitting two “aces” during a round, or two golfers scoring one during the same round, but it happens somewhere in the world once or twice a year. The odds of players hitting three aces in a row on the same hole are akin to the odds of lightning striking the same spot three times.

In December, I spent a couple hours with the fated foursome on the course where it happened. I looked into their eyes and heard their story first-hand. After meeting Dan Condie, Marc Arcuri, Bob Fleming and Dave Schumacher (no ace for him), I had no doubt that the three consecutive aces were for real. The fellows are skilled golfers and of high character—factors that leave no room for the deception and stupidity required to have tried to bluff their way through such a scheme. To me, it isn’t their aces, but the occurrences afterward, that are remarkable.

Skepticism quickly permeated discussions about their feat. NBC’s New York headquarters decided it could not have occurred and cancelled national coverage. More disparagement followed the next day when the foursome was interviewed on a ratings-hungry radio station, further fueling disbelief.

Isn’t the game of golf unique among all sports in its lack of judges, its self-regulation? We accept a golfer’s scorecard as is, whether it records double-eagle or double-bogey. It is the same if a “one” is logged. The guys’ different aces should be accorded the same respect.

In an attempt to gain perspective, I called Ken Morton Sr. Ken is a paragon of Northern California golf, a member of the First Tee of Sacramento Golf Hall of Fame and founder emeritus of The First Tee of Greater Sacramento (formerly SAY Golf), a non-profit association dedicated to serving youth of all backgrounds and teaching them golf’s core values. Ken also is president of Morton Golf, his family business, which operates the Haggin Oaks Super Store, Mortongolfsales.com and a few area courses. In 2005, Ken was named to the PGA Golf Professionals Hall of Fame. As a five-time national PGA award winner, Ken is the most decorated club professional in the country, and a man of unquestionable character.

Ken reminded me that not everyone plays the game of golf the way it is meant to be played. In his many years of involvement in the game, he has occasionally met golfers who fabricate stories—and scorecards, in an effort to receive acclaim, to overcompensate for a low skills or a weak character. Ken concurred that he had no doubt that the triple aces were hit by the guys. (He too had looked into it.) This is one of the reasons the foundation of The First Tee program is to teach golf’s deeper, core values, which include honesty, integrity and judgment. Golfers and fans of golf must realize that life’s values are the same as golf’s.

Those who mistakenly see a low(er) score as the sole reason for playing, who don’t include on their scorecard an undetected use of the fabled foot-wedge or the extra mulligan (or arbitrarily call Winter Rules into effect and give their ball a bump)—their disrespect for the game helps to taint the achievements of others. Adherence to honesty in golf, as in life, is required to enjoy it to its fullest.
And so it was that the fantastic shots that four Northern California guys experienced in 2005 on a comfortable course in north Sacramento County did not receive deserved, worldwide attention. Reconsider your skepticism. Incredible things happen in life—and in golf, too. How about those aces!